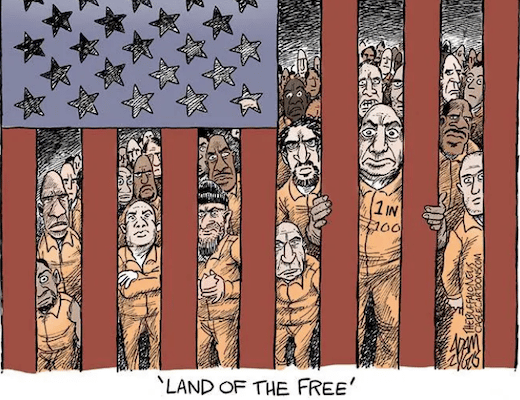 While U.S. leaders denounce Russia and China, and other official enemies for alleged human rights violations daily, they are silent about the massive human rights abuses that occur routinely in the U.S. prison system—the largest and most oppressive in the world.

Jonny, a pseudonym for a 45-year-old man currently being held in pretrial detention in Miami’s Federal Detention Center (FDC Miami), believes that prison authorities are trying to kill him. Maria, Jonny’s partner of three years, tells me in a series of interviews translated by her teenage daughter that she is also concerned for his life, given FDC Miami’s cruel mismanagement of his grave medical condition.

As a pretrial detainee, Jonny’s innocent until proven guilty and protected by the Fifth and Sixth Amendments of the U.S. Constitution, but you wouldn’t know this from the inhumane treatment he receives at the prison. Jonny’s detention should not deprive him of life, liberty, or property without due process, and it certainly shouldn’t subject him to punishment since he has not been convicted of a crime.

Yet, medical neglect and solitary confinement become punishment and a death sentence for the incarcerated. According to the Bureau of Justice Statistics (BJS), in their December 2021 report, the number of federal prisoners who died in the custody of a facility operated by the Federal Bureau of Prisons (BOP) was 381 in 2019, and almost 89% of the 7,125 federal prisoners who died in custody from 2001 to 2019 died of illness.

Defense attorneys and union leaders agree that severe understaffing, staff augmentation(where employees such as teachers and counselors must substitute as correctional officers), critical supply shortages, and an overall poor response to Covid-19 can be blamed for recent inmate and correctional officer deaths and the life-threatening conditions found at prisons managed by the BOP.

However, prison insiders also view this extreme level of disorganization as a way to hide unscrupulous methods of coercion which are used to elicit confessions, incentivize inmates into tacitly becoming jailhouse informants, eliminate targeted inmates, or satisfy sadistic impulses. Regardless of the cause, keeping necessary medicines and treatment from inmates, whether it be intentional or unintentional, is at best an insidious form of tortureand at worst outright murder.

War on Drugs Results in 700% Increase in Incarcerations

Criminal justice system reformists question the fiscal logic of tying staffing levels to an out-of-control incarceration rate. Not only does the U.S. have the largest number of prisoners per capita in the world, but between 1972 and 2009, there was nearly a 700% increase in the prison population. This skyrocketing increase can be attributed to changes in sentencing and the war on drugs that have, in effect, targeted minorities. BOP’s statisticslist drug offenses for 45% of their inmate population.

All other categories range from 0% to 21%, with most under 5%. Florida’s incarceration rate exceeds that of the U.S. and founding NATO countries, as shown on the below-listed graph, with 795 people incarcerated out of 100,000.

This aberrant incarceration rate is particularly reprehensible in a wealthy country that claims the moral high ground to justify imposing unilateral economic coercive measures (sanctions) on other nation-states for alleged human rights violations.

Not only has the U.S. criminal justice system ruined entire communities with the scourge of absentee parenting and lost family wages—leading to intergenerational incarceration, abject poverty, and the proliferation of involuntary servitude (a modern-day form of slavery)—but it fails to rehabilitate prisoners and wastes taxpayer funds.

The cost to U.S. taxpayers for its mass incarceration system, with its high recidivism rate, is $182 billion annually (without adjustments for inflation), as detailed in a 2017 report by the Prison Policy Initiative.

Within this daunting criminal justice system, Maria struggles to keep Jonny, age forty-five, alive by sending money for his commissary use, which costs $200 per month. Outrageously overpriced Ramen noodles, cookies, and chips not only supplement the often-inedible prison food but can also be used as currency, for example, to obtain a better place in the queue for making phone calls.

Under cover of the pandemic, the abuse of the incarcerated is further exacerbated and concealed due to visitor restrictions. When prison operations are set at level 3, as they are at the Federal Detention Center (FDC) in Miami, where Jonny is an inmate, even attorney visits can be suspended until further notice.

Defense attorney, Paul D. Petruzzi, explains that when visitation hours are limited to mornings and early afternoons by the warden, access to legal representation for inmates is negatively impacted since “most attorneys spend the first half of their days in court.”

He also finds the level 3 setting to be at odds with the prison’s daily operations as “masks are not used, and social distancing is not maintained.” While Jonny is not his client, many of the inmates he represents have also been denied necessary medical treatment, like Ulysses Cabrera. Cabrera’s pleas to see a neurologist were denied for over eighteen months. This resulted in the “once-brawny 32-year-old to decline quickly. He is now in a wheelchair, experiencing facial paralysis and going blind in both eyes,” according to Petruzzi.

Jonny’s physical suffering and anxiety break Maria’s heart during the two, seven-minute phone calls they share most days since his arrest in December 2021. Stress takes its toll, and Maria has been sick for weeks. Prison not only punishes inmates and fails to rehabilitate them, but it turns their families into collateral damage.

Jonny suffers from meningitis, an inflammation of the membrane surrounding his brain that causes fluid to accumulate in his head. As a result, he experiences fevers, severe headaches, dizziness, and confusion. Before Jonny’s arrest, a metal plate and shunt(drainage tube) were placed in his skull by a neurosurgeon.

Shunting allows the fluid in Jonny’s head to drain out into his body, so his brain is not crushed by the buildup of pressure in his skull. However, shunts are tricky to maintain. They are highly susceptible to infection and, in Jonny’s case, require that he ingests a daily cocktail of antiviral, antibiotic, and antifungal medications.

Additionally, Jonny has undiagnosed gastrointestinal problems that result in relentless bouts of vomiting. But Jonny is not treated for his illness. Instead, Jonny tells Maria that “the guards put him in isolation [solitary confinement] to punish him because he cannot stop throwing up.” In April, Jonny said he was also “stripped naked and put under 24-hour supervision in a cold cell.” According to Maria, “isolation is sometimes a week, other times it’s a few days.” Jonny reports to Maria that since April, “he has lost over thirty pounds.” Solitary confinement is considered torture by human rights advocates.

When Maria doesn’t hear from Jonny for a few days, she assumes he is in isolation—which has become a more comforting thought to her than acknowledging he might be dead. Maria said Jonny calls her crying and tells her, “other prisoners have to help him because he has no strength.” Sometimes, “he even has trouble standing,” Maria’s daughter explained.

Maria believes “he is dying in there” and “Jonny thinks the prison is trying to kill him.” Often, “the guards claim a doctor is coming to see him, but no one arrives.” On the rare times he is given medication, “it’s half the quantity he needs.” Maria said Jonny is “terrified of the guards and a few prisoners.” Zoukis Consulting Group reports that violence is high at the FDC Miami facility. According to one inmate, “there is an altercation every day, and the use of weapons (e.g., knives, locks, etc.) are not uncommon.”

While he doesn’t negate the overall issues of staff shortages and augmentation faced by all federal prisons as reasons for inmate neglect and abuse, he views warden Carlton’s recent bonus, which he believes is based on his medical cost-cutting initiatives, to be “blood money.”

Warden Carlton was not available for comment. However, BOP has stated that bonuses are “based upon work performance.” Yet, BOP won’t define the criteria or indicators used to measure performance.

Seemingly, BOP hides behind an opaque excuse that their decision is for “safety and security reasons,” which angers critics who view these bonuses as “a reward for negligence and incompetence” and an outright waste of taxpayer money.

Litigation against BOP facilities is happening nationwide, and attorney Petruzzi seeks to organize a similar effort at FDC Miami.

He is encouraged by the litigation put forth by the Federal Defenders of New York against the Metropolitan Detention Center, a federal jail located in Brooklyn, New York (where Jeffrey Epstein was killed), and its warden for violating the inmates’ Sixth Amendment right to Counsel and its own Administrative Procedure Act; the Federal Class-Action lawsuit filed against a federal prison located in Danbury, Connecticut, to protect prison inmates from Covid-19; and, the many lawsuits filed for sexual abuse against a federal prison in Dublin, California.

Maria and Jonny’s surnames are not used to protect them from possible retaliation.

Elected officials must ensure prisons are staffed with properly trained correctional officers and that inmates receive necessary medications and treatments, as is their constitutional right.

In addition, taxpayer dollars should be spent wisely through changes in mandatory sentencing for drug-related offenses—to reduce the prison population, reunite families, and end intergenerational incarceration—and not be misused to expand a failing prison system and chase a skyrocketing incarceration rate.