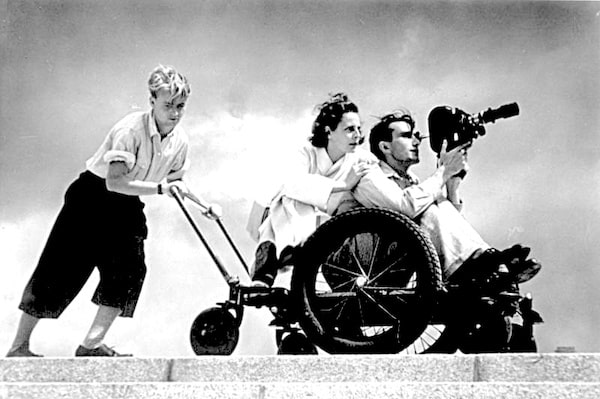 In the 1970s, I met one of Hitler’s leading propagandists, Leni Riefenstahl, whose epic films glorified the Nazis. We happened to be staying at the same lodge in Kenya, where she was on a photography assignment, having escaped the fate of other friends of the Fuhrer.

She told me that the “patriotic messages” of her films were dependent not on “orders from above” but on what she called the “submissive void” of the German public.

Did that include the liberal, educated bourgeoisie? I asked. “Yes, especially them,” she said.

I think of this as I look around at the propaganda now consuming Western societies.

Of course, we are very different from Germany in the 1930s. We live in information societies. We are globalists. We have never been more aware, more in touch, better connected.

Or do we in the West live in a Media Society where brainwashing is insidious and relentless, and perception is filtered according to the needs and lies of state and corporate power?

The United States dominates the Western world’s media. All but one of the top 10 media companies are based in North America. The internet and social media—Google, Twitter, Facebook—are mostly American owned and controlled.

The extent and scale of this carnage is largely unreported, unrecognised, and those responsible continue to dominate Anglo-American political life.

In the years before he died in 2008, the playwright Harold Pinter made two extraordinary speeches, which broke a silence.

best defined as follows: kiss my arse or I’ll kick your head in. It is as simple and as crude as that. What is interesting about it is that it’s so incredibly successful. It possesses the structures of disinformation, use of rhetoric, distortion of language, which are very persuasive, but are actually a pack of lies. It is very successful propaganda. They have the money, they have the technology, they have all the means to get away with it, and they do.

In accepting the Nobel Prize for Literature, Pinter said this:

The crimes of the United States have been systematic, constant, vicious, remorseless, but very few people have actually talked about them. You have to hand it to America. It has exercised a quite clinical manipulation of power worldwide while masquerading as a force for universal good. It’s a brilliant, even witty, highly successful act of hypnosis.

Pinter was a friend of mine and possibly the last great political sage—that is, before dissenting politics were gentrified. I asked him if the “hypnosis” he referred to was the “submissive void” described by Leni Riefenstahl. 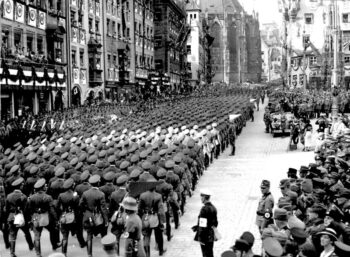 Leni Riefenstahl and a camera crew stand in front of Hitler’s car during 1934 rally in Nuremberg. (Bundesarchiv, CC-BY-SA 3.0, Wikimedia Commons)

It means the brainwashing is so thorough we are programmed to swallow a pack of lies. If we don’t recognise propaganda, we may accept it as normal and believe it. That’s the submissive void.

In our systems of corporate democracy, war is an economic necessity, the perfect marriage of public subsidy and private profit: socialism for the rich, capitalism for the poor. The day after 9/11 the stock prices of the war industry soared. More bloodshed was coming, which is great for business.

Today, the most profitable wars have their own brand. They are called “forever wars”—Afghanistan, Palestine, Iraq, Libya, Yemen and now Ukraine. All are based on a pack of lies.

Iraq is the most infamous, with its weapons of mass destruction that didn’t exist. NATO’s destruction of Libya in 2011 was justified by a massacre in Benghazi that didn’t happen. Afghanistan was a convenient revenge war for 9/11, which had nothing to do with the people of Afghanistan. 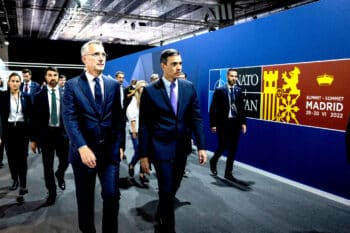 Today, the news from Afghanistan is how evil the Taliban are—not that U.S. President Joe Biden’s theft of $7 billion of the country’s bank reserves is causing widespread suffering. Recently, National Public Radio in Washington devoted two hours to Afghanistan–and 30 seconds to its starving people.

At its summit in Madrid in June, NATO, which is controlled by the United States, adopted a strategy document that militarises the European continent, and escalates the prospect of war with Russia and China. It proposes “multi domain warfighting against nuclear-armed peer-competitor.” In other words, nuclear war.

NATO’s enlargement has been an historic success.

I read that in disbelief. 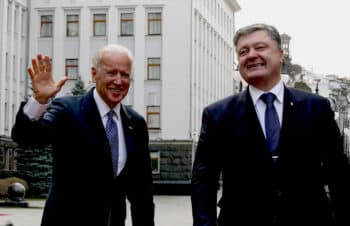 The news from the war in Ukraine is mostly not news, but a one-sided litany of jingoism, distortion, omission. I have reported a number of wars and have never known such blanket propaganda.

In February, Russia invaded Ukraine as a response to almost eight years of killing and criminal destruction in the Russian-speaking region of Donbass on their border.

In 2014, the United States had sponsored a coup in Kiev that got rid of Ukraine’s democratically elected, Russian-friendly president and installed a successor whom the Americans made clear was their man.

In recent years, American “defender” missiles have been installed in eastern Europe, Poland, Slovenia, the Czech Republic, almost certainly aimed at Russia, accompanied by false assurances all the way back to James Baker’s “promise” to Soviet leader Mikhail Gorbachev in February 1990 that NATO would never expand beyond Germany.

Ukraine is the frontline. NATO has effectively reached the very borderland through which Hitler’s army stormed in 1941, leaving more than 23 million dead in the Soviet Union.

Last December, Russia proposed a far-reaching security plan for Europe. This was dismissed, derided or suppressed in the Western media. Who read its step-by-step proposals? On Feb. 24, President Volodymyr Zelensky threatened to develop nuclear weapons unless America armed and protected Ukraine.

On the same day, Russia invaded–an unprovoked act of congenital infamy, according to the Western media. The history, the lies, the peace proposals, the solemn agreements on Donbass at Minsk counted for nothing.

On April 25, U.S. Defense Secretary Lloyd Austin flew into Kiev and confirmed that America’s aim was to destroy the Russian Federation–the word he used was “weaken.” America had got the war it wanted, waged by an American bankrolled and armed proxy and expendable pawn.

Almost none of this was explained to Western audiences.

Russia’s invasion of Ukraine is wanton and inexcusable. It is a crime to invade a sovereign country. There are no “buts”–except one.

When did the present war in Ukraine begin and who started it? According to the United Nations, between 2014 and this year, some 14,000 people have been killed in the Kiev regime’s civil war on the Donbass. Many of the attacks were carried out by neo-Nazis.

Watch an ITV news report from May 2014, by the veteran reporter James Mates, who is shelled, along with civilians in the city of Mariupol, by Ukraine’s Azov (neo-Nazi) battalion.

In the same month, dozens of Russian-speaking people were burned alive or suffocated in a trade union building in Odessa besieged by fascist thugs, the followers of the Nazi collaborator and anti-Semitic fanatic Stepan Bandera. The New York Times called the thugs “nationalists.”

“The historic mission of our nation in this critical moment,” said Andreiy Biletsky, founder of the Azov Battaltion,

is to lead the White Races of the world in a final crusade for their survival, a crusade against the Semite-led Untermenschen. 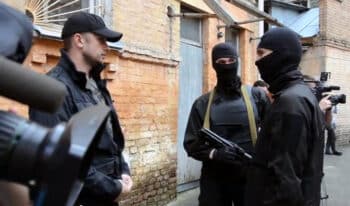 Since February, a campaign of self-appointed “news monitors” (mostly funded by the Americans and British with links to governments) have sought to maintain the absurdity that Ukraine’s neo-Nazis don’t exist.

Airbrushing, once associated with Stalin’s purges, has become a tool of mainstream journalism.

In less than a decade, a “good” China has been airbrushed and a “bad” China has replaced it: from the world’s workshop to a budding new Satan.

Much of this propaganda originates in the U.S., and is transmitted through proxies and “think-tanks,” such as the notorious Australian Strategic Policy Institute, the voice of the arms industry, and by journalists such as Peter Hartcher of The Sydney Morning Herald, who has labeled those spreading Chinese influence as “rats, flies, mosquitoes and sparrows” and suggested these “pests” be “eradicated.”

News about China in the West is almost entirely about the threat from Beijing. Airbrushed are the 400 American military bases that surround most of China, an armed necklace that reaches from Australia to the Pacific and south east Asia, Japan and Korea. The Japanese island of Okinawa and the Korean island of Jeju are like loaded guns aimed point blank at the industrial heart of China. A Pentagon official described this as a “noose.”

Palestine has been misreported for as long as I can remember. To the BBC, there is the “conflict” of “two narratives.” The longest, most brutal, lawless military occupation in modern times is unmentionable.

The stricken people of Yemen barely exist. They are media unpeople. While the Saudis rain down their American cluster bombs with British advisers working alongside the Saudi targeting officers, more than half a million children face starvation.

This brainwashing by omission is not new. The slaughter of the First World War was suppressed by reporters who were given knighthoods for their compliance. In 1917, the editor of The Manchester Guardian, C.P. Scott, confided to Prime Minister Lloyd George:

If people really knew [the truth], the war would be stopped tomorrow, but they don’t know and can’t know.

The refusal to see people and events as those in other countries see them is a media virus in the West, as debilitating as Covid. It is as if we see the world through a one-way mirror, in which “we” are moral and benign and “they” are not. It is a profoundly imperial view.

The history that is a living presence in China and Russia is rarely explained and rarely understood. Vladimir Putin is Adolf Hitler. Xi Jinping is Fu Man Chu. Epic achievements, such as the eradication of abject poverty in China, are barely known. How perverse and squalid this is.

When will we allow ourselves to understand? Training journalists factory style is not the answer. Neither is the wondrous digital tool, which is a means, not an end, like the one-finger typewriter and the linotype machine.

In recent years, some of the best journalists have been eased out of the mainstream. “Defenestrated” is the word used. The spaces once open to mavericks, to journalists who went against the grain, truth-tellers, have closed. 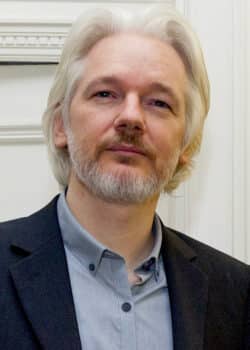 The case of Julian Assange is the most shocking. When Julian and WikiLeaks could win readers and prizes for The Guardian, The New York Times and other self-important “papers of record,” he was celebrated.

When the dark state objected and demanded the destruction of hard drives and the assassination of Julian’s character, he was made a public enemy. Vice President Joe Biden compared him to a “hi-tech terrorist.” Hillary Clinton asked, “Can’t we just drone this guy?”

The ensuing campaign of abuse and vilification against Julian Assange–the U.N. rapporteur on torture called it “mobbing”–brought the liberal press to its lowest ebb. We know who they are. I think of them as collaborators: as Vichy journalists.

Having soaked for 82 years in a deep bath of righteousness that is the official version of the last world war, isn’t it time those who are meant to keep the record straight declared their independence and decoded the propaganda? The urgency is greater than ever.