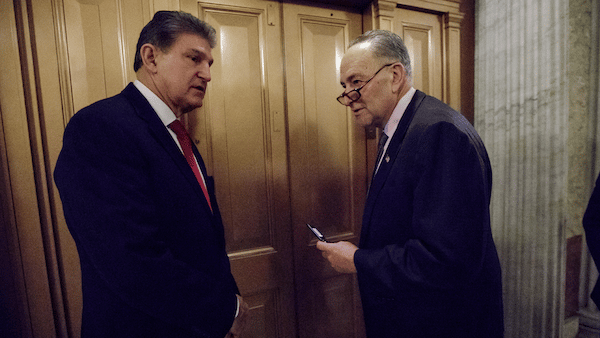 As vast swaths of the country are being battered by climate-intensified droughts and heatwaves, Sen. Bernie Sanders (Ind-Vt.) just threw a wrench into Democrats’ reported plans to fast track approval of oil and gas pipelines as part of an unrelated spending bill: On Thursday, he pledged to vote against the proposal, even if it is included in legislation required to avert a partial government shutdown.

The open question now is whether enough other Democrats will use their power to block–rather than merely complain about–a pipeline deal that environmental groups say could detonate a climate bomb amid the intensifying ecological crisis.

Soon after Sanders’ announcement, one Democrat–Rep. Ro Khanna (D-Calif.)–told The Lever that he would similarly vote no on a spending bill if it includes the pipeline measure.

However, House progressives have not committed to providing a bloc of no votes in the lower chamber.

We’re building a reader-supported investigative news outlet that holds accountable the people and corporations manipulating the levers of power. Join our fight by becoming a free subscriber today.

The pipeline deal was originally negotiated by Senate Majority Leader Chuck Schumer (D-N.Y.) and Sen. Joe Manchin (W.Va.), who are respectively Congress’ top recipients of fossil fuel and utilities industry campaign cash. One utility and pipeline company that could benefit from the deal has funneled more than $400,000 to Democrats’ Senate and House campaign committees.

Schumer said Wednesday he intends to attach the permitting deal to a so-called continuing resolution needed to keep the government running. Presuming that Republicans will vote against any Democratic spending bill, it would only take five Democratic no votes to block the legislation in the narrowly divided House.

A Fossil Fuel Gift In An Unrelated Bill

Congressional leaders periodically attach unpopular corporate-backed provisions to ongoing spending bills as a way to force lawmakers to vote for those unpopular items, under threat of being blamed for shutting down the government.

In this case, though, Sanders appears to be putting his foot down. On Thursday, he delivered a Senate floor speech promising to “not vote for any bill that makes it easier for Big Oil to destroy the planet.”

As of Thursday, at least 59 House Democrats had signed a new letter slamming the pipeline deal and urging Democratic leaders “to ensure that these provisions are kept out of a continuing resolution or any other must-pass legislation this year” that is necessary to avert a government shutdown.

However, even as more than 650 groups are warning that the pipeline bill would be an environmental disaster, the House letter avoids going as far as Sanders: The signatories are not expressly pledging to vote down the spending bill if it includes that language.

A spokesperson for House Natural Resources Committee chairman Rep. Raúl Grijalva (D-Ariz.), who organized the letter, did not respond to questions from The Lever about whether he will vote against a continuing resolution that includes the permitting measure.

“In the face of the existential threats like climate change and MAGA extremism, House and Senate leadership has a greater responsibility than ever to avoid risking a government shutdown by jamming divisive policy riders into a must-pass continuing resolution,” Grijalva said in a statement.

A Deal For Big Donors

The pipeline legislation–the text of which has not yet been released–was an outgrowth of a reported deal between Schumer and Manchin as a condition for the West Virginia coal magnate’s vote for the Inflation Reduction Act, which includes other gifts to Manchin’s fossil fuel industry donors.

Manchin, who is Congress’ top recipient of oil and gas industry contributions, is specifically aiming to speed up approval of a West Virginia gas pipeline that critics say would release greenhouse gas emissions equivalent to 26 coal power plants, or 19 million new cars on the road.

In all, Schumer is Congress’ top recipient of donations from electric utilities. One of Schumer’s former aides has been lobbying for utility companies on pipeline and permitting issues.

However, if those lawmakers wanted to expedite permitting just for renewables, they could just do that–rather than also expanding fossil fuel infrastructure that is fueling the climate crisis.

A Familiar Story Of Polite Requests Without Concrete Pledges

If Democratic leaders remain committed to using an unrelated spending bill to pass the pipeline provisions, the only chance to stop it could be for enough House and Senate Democrats to vote against the so-called continuing resolution, risking a temporary government shutdown just weeks before the midterm elections.

Even then, Republicans could still provide yes votes to help their own fossil fuel donors, but fewer Democratic votes would raise the hurdle to passage.

If this all feels familiar, that’s because it has happened before. This time last year, the Congressional Progressive Caucus was whipping votes to hold House Speaker Nancy Pelosi (D-Calif.) to her promise that the bipartisan infrastructure bill and climate and social spending bill would pass at the same time.

That pledge was necessary to keep the climate and Democrats’ social spending bill–known as Build Back Better–paired, because progressives knew they needed to use the Chamber of Commerce-approved infrastructure bill as leverage to force Manchin and Sen. Kyrsten Sinema (D-Ariz.) to vote for Build Back Better.

Manchin then refused to vote for Build Back Better, before ultimately agreeing to a substantially smaller version of the legislation now known as the Inflation Reduction Act. The new legislation included some energy tax credits, climate spending, drug pricing provisions, and health insurance subsidies, but it excluded many of the more progressive elements of the original bill.

Now, the Congressional Progressive Caucus is in a similar position–in this case, it could exercise its power to stop a carbon bomb. But so far, the caucus has stopped short of pledging to vote against the pipeline deal at all costs.

Jayapal did not respond to The Lever’s query about whether the caucus is urging its members to vote no on a continuing resolution if it includes the pipeline bill.

In addition to Sanders and Khanna, a handful of Congressional Progressive Caucus members have made harsh statements against the prospect of a pipeline bill.

“Handshake deals made by others in closed rooms do not dictate how I vote, and we sure as hell don’t owe Joe Manchin anything now,” Rep. Rashida Tlaib (D-Mich.) told The American Prospect last month.

He and his fossil fuel donors already got far too much in the IRA. I support Chair Grijalva’s call for a standalone vote, and we will vote this dirty deal down, one way or another.

“I am not going to be steamrolled into a bunch of fossil fuel give-aways just because Manchin cut a deal in a closed room with Chuck Schumer,” Rep. Jared Huffman (D-Calif.) said last month.

He doesn’t get to run the show on something like this, and many of us will have a say on what that deal looks like if it even happens.