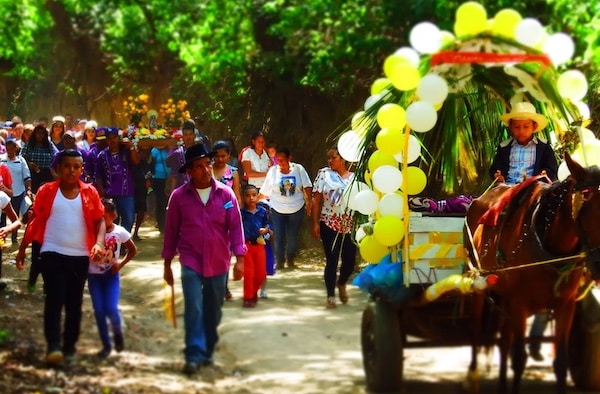 Celebration of the Virgen of the Nancite, community of Cuajachillo No. 2, Ciudad Sandino. Photo: Casa Benjamin Linder.

Becca Renk has lived and worked in sustainable community development in Nicaragua since 2001 with the Jubilee House Community and its project, the Center for Development in Central America. The JHC-CDCA also works to educate visitors to Nicaragua, including through their hospitality and solidarity cultural center at Casa Benjamin Linder.

Recently a deluge of headlines about the Catholic Church in Nicaragua has appeared in international media—but not one of the articles has accurately explained what is happening. Below I’ll break down Nicaragua’s relationship with the Catholic Church and recent events, all links are to excellent articles for those who want to delve deeper.

Background—Just how far back does this go?

Colonization: The Catholic Church first came to Nicaragua with the Spanish colonizers and, as elsewhere in the world, the hierarchy and much of the clergy facilitated colonial conquest through conversion. In Nicaragua, the indigenous population was utterly decimated: most of the population was killed, died of disease, or were abducted and sold into slavery. With the notable exceptions of some individual priests like Antonio Valdivieso, the Church was not only complicit but actively participated in the horrors of colonization.

Insurrection: Post independence, the Church hierarchy and Nicaragua’s wealthy elite ran the country together; for generations, each powerful family had a son who became a priest. In the 20th century, the Catholic hierarchy supported the bloody Somoza dictatorship during the almost 45 years of their rule, and only at the very end did some in the hierarchy support the people’s liberation.

Revolution: Unlike in Cuba, the Nicaraguan revolution was never secular—in fact, Nicaragua’s Revolution was so influenced by liberation theology that in the 1980s there was a popular saying was “Between Christianity and revolution there is no contradiction.” There were priests in the government—several Ministers—but they were not the priests of the Church hierarchy, they were working to improve the lives of the poor majority. The Catholic hierarchy was openly opposed to the Sandinista Revolution;* Pope John Paul II came to Nicaragua and chastised the priests in government, the Vatican later censored them.

Government of Reconciliation and National Unity

When the Sandinista party came back into power in 2007, they formed the Government of Reconciliation and National Unity and sought not only to work with former enemies from the war—the Contra’s political wing joined the Sandinista alliance and nominated the Vice President for that term from within their ranks—but also included the Church, big business, and trade unions in the planning and management of government programs—the Church was given a place at the governing table. But big business and the Catholic Church effectively ended that model when they conspired to overthrow the elected government in 2018 and used their role in society to try to turn the people against the government.

In April 2018, protests began that were ostensibly against proposed reforms to the social security system. It quickly became obvious, however, that the protests were about something else: an attempt to overthrow the Nicaraguan government. Armed opposition groups set up hundreds of roadblocks which paralyzed the country and became epicenters of violence. The roadblocks lasted for nearly three months, some 253 people were killed, and many more injured. While opposition sources blamed the government for nearly all deaths, a careful study by the Nicaraguan Truth, Justice and Peace Commission showed otherwise. Journalist’s investigations have shown that the U.S. government was funding the violence through USAID, NED, IRI—all “soft arms” of the CIA.

Although the U.S. was funding the attempted ousting of Nicaragua’s democratically elected Sandinista government, the Catholic Church hierarchy in Nicaragua was instigating it. You can read first-hand accounts of priests initiating violence, including in neighborhoods of Ciudad Sandino, here. While the Bishop’s conference was supposedly “mediating” a national dialogue, its own priests were calling for violence. At these “roadblocks of death,” as they came to be known, Sandinista supporters were identified, beaten, raped, tortured and murdered—with priests watching and sometimes participating in the violence.

Although hundreds were arrested and convicted of violent crimes in 2018, opposition demanded the release of what they called “political prisoners.” In the interests of peace and reconciliation, the Nicaraguan government declared a general amnesty and freed everyone who had been charged in conjunction the attempted coup, including known murderers, on the condition that they not reoffend.

The hierarchy’s participation in the failed coup attempt in 2018 has had consequences for the Catholic Church: the Nicaraguan government has reduced by half its financial support for cathedrals, churches and maintenance of the Bishops’ Conference facilities. But the Church has also lost its people: I’ve talked to many Catholics who no longer go to mass because their priests continue to promote violence and seek political ends from the pulpit. These people have not lost their faith—they continue to pray at home and take part in religious celebrations outside the Church—but they no longer attend mass. This sentiment is widespread—recent polls show that only 37% of Nicaraguans today identify as Catholics, as opposed to 50% only a few years ago.

So what’s going on now that has caused so many inaccurate headlines? The first week of August, Nicaraguan authorities dismantled the network of communication outlets (five radio stations and a local television channel) owned by Rolando Alvarez. Alvarez is Bishop of Estelí and Matagalpa, but he is also a political actor, one of the leaders involved in the violent coup attempt in 2018 and his discourse has created a climate of confrontation, perhaps in an attempt to destabilize Nicaragua’s government in the run up to November’s municipal elections.

Alvarez’ private media outlets were closed because are alleged to have been used to launder money to pay for street violence to feed destabilization attempts. Following the closure of his media outlets, Alvarez was placed under house arrest while he is under investigation for a series of crimes. Even following his arrest, however, Alvarez continued to foment violence which threatened the safety of the population of Matagalpa. Last week he was moved to house arrest in Managua where he will remain while he is being investigated; he is receiving visits from his family and from the Cardinal with whom he has spoken at length.

Alvarez isn’t the only priest to be arrested in Nicaragua in recent months—Nicaraguan authorities have arrested, tried and convicted a priest who raped a 12 year old girl and another who beat his partner (the Nicaraguan public didn’t blink an eye at the fact that the priest had a partner, but they were outraged that he beat her). Interestingly, we have not seen international media using the cases of the rapist and wife-beating priests of Nicaragua to claim religious persecution the way that they are for Alvarez, but all three are cases of Nicaraguan authorities holding Catholic priests accountable for their individual actions, just as they would anyone else.

Is there religious persecution in Nicaragua?

Religious persecution can also be defined as attacks on religious institutions, of which the international press also accuses the Nicaraguan government. Few concrete examples are given—most are alleged defacements of churches that cannot be attributed to the government or its institutions. The most often cited incident is a fire in July 2020 in the Managua Cathedral which destroyed the image of the Blood of Christ. Church authorities claim it was caused by a firebomb attack on the Cathedral. In their investigation, however, the Nicaraguan police and the fire department found no evidence of a firebomb and concluded that the fire was caused by a spray bottle of alcohol used for sanitizing hands which was left too close to an open flame in the poorly ventilated chapel. Eyewitnesses saw no suspicious activity; there were only two people in the cathedral at the time of the fire. Regardless of the results of the investigation, the Church hierarchy maintains their claim of “persecution” and has left the chapel as it was following the fire, encouraging visitors to pray to the charred crucifix.

Not only is there no religious persecution in Nicaragua, but there is an atmosphere of thriving religious expression. For proof of this, one just has to look out a window in Nicaragua right now—August is patron saint festival season in this country. While international media has been printing tales of religious persecution, dozens of Nicaraguan cities and towns have been busy celebrating their Catholic saints in festivals supported economically and logistically by municipal governments. Our own village is celebrating the Virgin of the Nancite this weekend and in Ciudad Sandino we celebrated Little Santo Domingo last weekend. But the largest celebration of all was tens of thousands of people who walked and danced freely through Managua’s streets on two separate public holidays dedicated to Santo Domingo. In Nicaragua, the Church hierarchy may be sequestered inside walls, but the church of the people is in the street joyfully celebrating its faith.