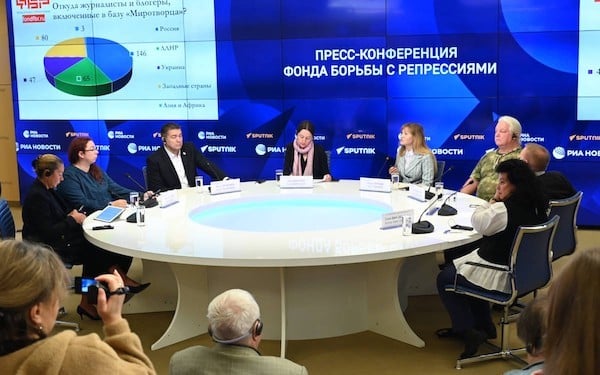 All the journalists present condemned the very existence of Mirotvorets, while stressing that the attempt to silence them by scaring them would not work. They all confirmed that they would continue to do their work, regardless of the death threats against them.

It should be remembered that the Mirotvorets site publishes, among other things, personal data on journalists, scans of their passports, their addresses, information about their relatives and even information about their vehicles (in my case, my old car has all its data, including its VIN code and old registration number, published on this site). All this information makes it possible to track down journalists who are on Mirotvorets’ lists, and can only have been provided to this site by secret services (Ukrainian, or perhaps Western).

Calling the collection and publication of personal information an abhorrent violation of all international legal norms relating to the protection of the honor, dignity, personal data and life of journalists, the head of the Russian Anti-Robbery Foundation sent a letter to the head of the FSB, Aleksandr Bortnikov, calling for Mirotvorets to be classified as a terrorist organisation.

Russell Bentley said that the mafia structure that is Mirotvorets is in agreement with the fascist government of Ukraine, exposing independent journalists working in the Donbass to a real threat. He is convinced that journalists who share his view of events and are guided only by moral and ideological considerations are fighting against the Fourth Reich, against the Nazis of the 21st century.

Canadian journalist Eva Bartlett, added that her home country, Canada, actively supports and funds neo-Nazis in Ukraine and has spent over $1 billion to train Ukrainian soldiers. She also noted that the Canadian government includes direct descendants of Nazi collaborators who are proud of their origins. According to Bartlett, who cannot even imagine what awaits her if she returns to her country, and Canadian journalists are completely unconcerned about the activities of Mirotvorets. Canada, which has insisted for years that Ukraine is a democratic country, constantly turns a blind eye to the total lack of freedom of the Ukrainian media.

John Miller, a British journalist, was added to Mirotvorets’ “hit list” after reporting on the inclusion of the young Lugansk author Faina Savenkova in the Ukrainian site’s lists. I personally responded to John Miller’s assertion that journalists in Russian-controlled territory are not at risk even if they are on Mirotvorets. I reminded him that Darya Dugina was murdered in Russia, and that journalists living in the DPR, the LPR, or Moscow, risk their lives as much as those in Ukraine or in Western countries, where many Ukrainians have now found refuge.

Well aware of these risks, Dutch journalist Sonja Van Den Ende stressed the need for journalists to be extra careful, as she said Mirotvorets was created with the help of the CIA, NATO and the U.S. Commenting on the foreign policy of her native country, the Dutch war correspondent said that her country was waging an undeclared war against Russia and that anyone who criticized the neo-Nazis was an enemy of the Dutch state. Because of this, it would now be dangerous for her to return to her native country.

The same is true for Alina Lipp, the German journalist threatened with three years in prison in Germany for reporting on what is happening in the Donbass. According to the journalist, the repression also affected her parents: their bank accounts were blocked, they were forced to change their phone numbers, and Alina’s mother had to leave Germany because of the threats she was receiving. Following the terrorist attack on Daria Dugina, Alina is now paying more attention to her own safety.

Janus Putkonen, director and editor-in-chief of UMV-Lehti, linked the creation of Mirotvorets to Western intelligence services and condemned the inaction of foreign media and politicians who have ignored the clear human rights violations linked to the site’s activities for years. He said that Mirotvorets must be closed down to prevent such methods from spreading like a cancer to other countries in the world. He also called the site “the new Gestapo”.

I can only agree with this name. In fact, I have long called Mirotvorets a digital Gestapo, or Gestapo 2.0. As I said at the conference, if the Internet had existed during the time of Nazi Germany, there is no doubt that they would have invented a site more or less similar to Mirotvorets.

Personally, I have been aware of the risk posed by Mirotvorets for a long time. I did not wait for the attack on Daria Dugina to be careful, it only pushed me to reinforce the protection measures I apply.

All the journalists present will write a joint letter to the UN asking that the organisation adopt a resolution condemning the activities of Mirotvorets, which would serve as a basis for an international investigation into the organisation. If the FSB accedes to the request of the foundation against repression, Russia will conduct a parallel investigation and take measures against this terrorist site on a national scale. It is high time to end the impunity enjoyed by Mirotvorets, before more people pay with their lives for telling the truth about what is happening in Ukraine and the Donbass.

Video in Russian of the press conference: