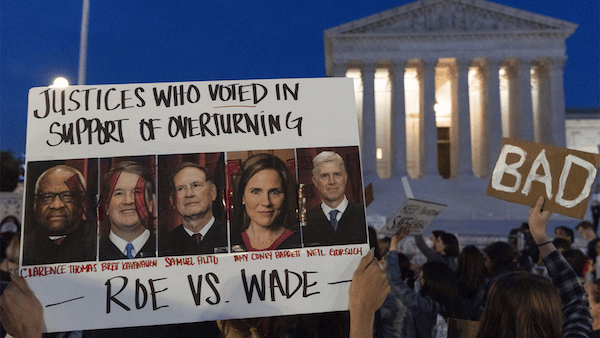 When the U.S. Supreme Court allowed states to limit reproductive rights in its June ruling in Dobbs v. Jackson Women’s Health, experts predicted that conservatives would soon use the decision to try to secure a federal ban on abortion.

Anti-abortion activists in Rhode Island just filed a petition asking the Supreme Court to consider overturning their state judges’ recent decision that fetuses do not have standing to challenge the state’s law protecting abortion rights. They want the high court to rule that fetuses are entitled to due process and equal protection under the 14th Amendment. Such a ruling establishing “fetal personhood” would go beyond the Dobbs ruling, by banning abortions nationwide, rather than leaving the issue to the states.

To move forward, the petitioners need just four of the Supreme Court justices to agree to hear the case.

“This case presents the unavoidable confrontation of Dobbs,” the petition says, “which left unresolved the tensions between the Tenth Amendment, federalism, and any surviving constitutional guarantees for the unborn.” Each year, thousands of claimants petition the Supreme Court to consider cases, and the court typically grants only about 80 of the requests.

Already, 14 states have banned abortion in most or all cases–meaning nearly 21 million women have lost access to abortion–and more states are considering laws to restrict access.

“The recognition of fetal personhood nationwide could mean a total ban on abortion for everyone in the United States, and if an increasingly sophisticated minority of anti-abortion extremists have their way, many more women would face criminal charges for ending their pregnancies,” leading reproduction legal expert Mary Zielger wrote in a recent New York Times op-ed.

A Promise That “The Court Will No Longer Decide”

When the court handed down the Dobbs ruling, the majority didn’t weigh in on the constitutional rights of fetuses.

“Our decision is not based on any view about when a State should regard prenatal life as having rights or legally cognizable interests,” Justice Samuel Alito wrote for the majority.

In a concurring opinion, Justice Brett Kavanaugh seemed to go further, arguing that any remaining questions about when an abortion should be legal would be left to the states.

“The Court will no longer decide how to evaluate the interests of the pregnant woman and the interests in protecting fetal life throughout pregnancy,” he wrote.

Instead, those difficult moral and policy questions will be decided, as the Constitution dictates, by the people and their elected representatives through the constitutional processes of democratic self-government.

Despite conservative justices’ signaling that they will let states take the lead, the anti-abortion movement is moving ahead to try to force the issue.

The petition from the Rhode Island activists asks the court to consider whether unborn fetuses have standing to sue, in particular to overturn a 2019 law passed in Rhode Island that prevented the state from interfering in a person’s right to an abortion “prior to fetal viability” or “after fetal viability when necessary to preserve the health or life of that individual.”

In May, the Rhode Island Supreme Court ruled that fetuses did not have standing to sue. That opinion was based in part on the high court’s decisions in Roe v. Wade and Planned Parenthood v. Casey.

The anti-abortion activists’ petition notes that Roe was overturned by Dobbs, and argues that Supreme Court justices should hear their appeal “to finally determine whether prenatal life, at any gestational age, enjoys constitutional protection–considering the full and comprehensive history and tradition of our Constitution and law supporting personhood for unborn human beings.”

If at least four justices vote to take up the case, Kavanaugh and the other justices will be forced to decide in the face of their declining public approval just how far they are willing to go in their assault on reproductive rights.