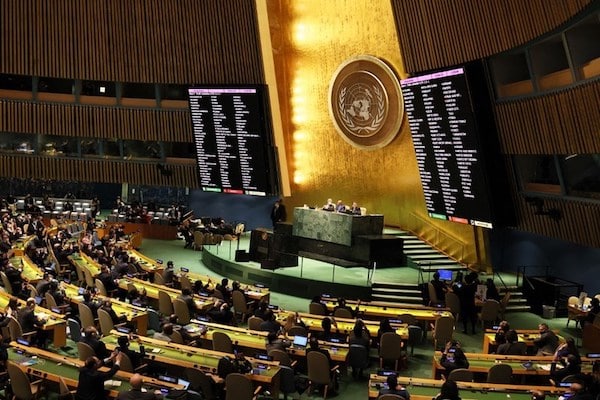 During a UN committee meeting, the head of the legal section of Russia’s Permanent Mission to the UN, Sergey Leonidchenko, said Russia expects U.S. visas will be provided immediately to the Russian delegation to participate in the High-Level Week of the UN General Assembly session. According to him, the delegation has not yet received visas.

“This is an unprecedented situation… We expect the host state to issue visas to the minister, his delegation, and all accompanying persons as soon as possible, as envisioned by the agreement,” Leonidchenko said.

He further stated that due to the U.S. visa policy, 34 Russian Permanent Mission UN diplomats and members of their families are unable to travel to their motherland, including for humanitarian reasons.

The only solution to resolve the issue of non-issuance of U.S. visas to Russian diplomats is for UN Secretary-General António Guterres to initiate an arbitration procedure, according to Leonidchenko.

Only last week, the European Council announced that it has fully suspended visa facilitation between the EU and Russia, thus reversing the agreement that served to simplify visa applications for Russian citizens.

The council, in a statement on its website, explained that the decision will entail increasing visa fees from €35 to €80—more than double the initial agreement. More restrictive rules will also be implemented regarding multiple-entry visas.

It is worth noting that the EU will lose around €21 billion ($20.97 billion) if it bars Russian tourists from entering the bloc, State Duma Speaker Vyacheslav Volodin wrote on his official Telegram channel, commenting on what he called “the frenzy of proposals to ban our citizens from entering the EU continues.”

“Today’s decision is a direct consequence of Russia’s actions and further proof of our unwavering commitment to Ukraine and its people,” said Vit Rakusan, Czech Interior Minister, in a statement.

Lavrov stated that with the U.S. being the host country of the UN Headquarters, it has the legal obligation to all members of the organization to take the extra mile so work can proceed smoothly and participation among all members is equal, adding that Russia sent a letter to the UN Secretary-General Guterres, calling attention to his responsibility to require the U.S. to “behave decently”.

This comes after the United Nations Human Rights Council attempted to suspend Russia’s membership in the sub-organization per U.S. Secretary of State Antony Blinken’s request.

In response to a question regarding Russia’s participation in the UN General Assembly this September, Lavrov stressed that “Russia cannot be unrepresented at the UN, and Western countries are not allowed to decide these issues,” adding,

As for the level of our presence there—whether it will be a delegation from Moscow or, as you said, our American colleagues will prohibit the arrival of our delegation in the spirit of their liberty—we’ll see.