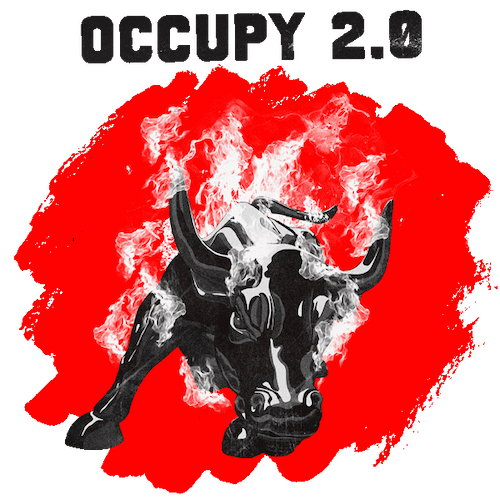 The original Occupy resonated because the moment was so hot. The wounds inflicted by the financial crash were deep and widespread. Everyone now knew what the 1% had gotten away with. The Arab Spring provided the prototype. The fuel was fresh, raw, homegrown fury.

Now, as we face the prospect of extinction, the conditions are in place for another monumental heave.
‍
This summer marked a terrifying new low-water-mark in the human project. Ecosystems crashed. Wars raged. Nations imploded. The iconic rivers of civilization—the Colorado, the Rhine, the Thames, the Danube, the Yangtze, the Ganges, the Nile—began to dry up. Others, swollen by flash floods, jumped their banks and displaced millions. Meanwhile, fires raged, supply chains failed, electricity grids blew up and water treatment plants ground to a halt.

Given the gravity of the catastrophe, you’d expect nothing less than a full-scramble response from world leaders.

Yet, unbelievably, that hasn’t happened. They’re doing almost nothing. The oil keeps flowing, the glaciers keep melting, the seas keep rising. It’s as if our leaders are hoping some magical solution to materialize out of the Egyptian desert at COP 27. Which it almost certainly won’t.

Our climate crisis will not be solved by the business-as-usual strategies of the past. None of the marching and pipeline blocking, the techno-fixes, conferences or Green New Deals will get this done. The only thing that can save us now is ourselves. We the people of the world must rise up and unleash a tsunami of rage so emotionally explosive that our leaders will simply have to listen and act. 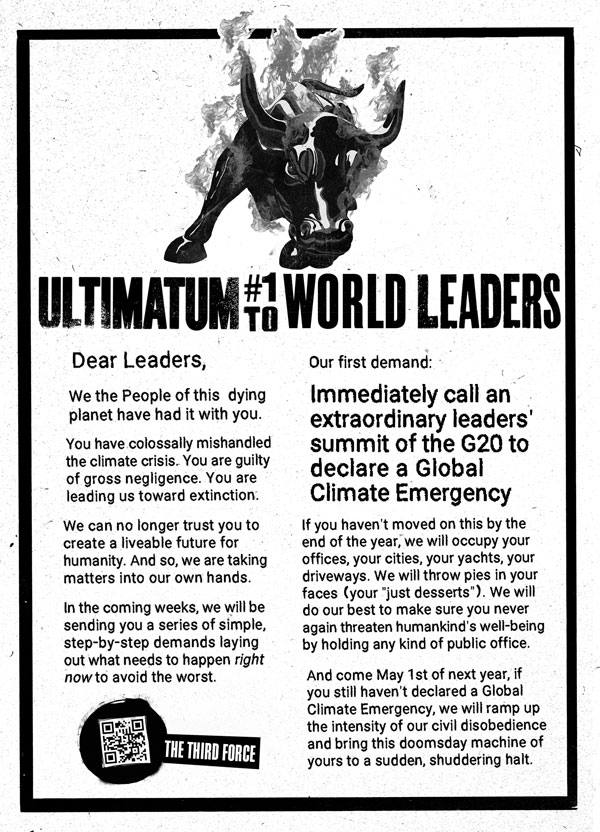 Whack this ULTIMATUM up on every lamppost in every city. Make it go viral, online and IRL. Hold it up before every intellectual, artist, writer, banker, politician, philosopher, poet and punk. Thrust it in the face of every world leader every chance you get.
‍
This last-ditch effort to win the planetary endgame begins on Saturday September 17, and continues unabated until we break through the suicidal inaction of our leaders.