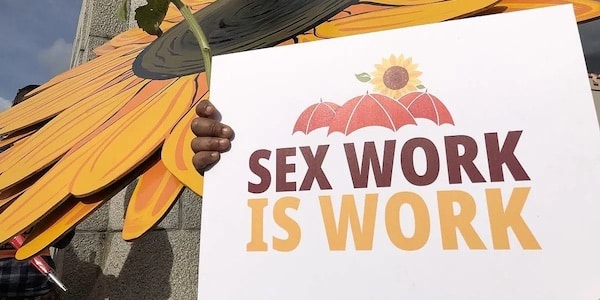 You might have heard the phrase “sex work is real work.” You might have noticed that the word prostitute is no longer used in the media, and think to yourself that sex work/sex worker is a politically correct way to say prostitute. This is a fair inference, but not the full story. Seeing how Labour Day just passed, I’d like to talk about the origin of the phrase sex work, why it’s important, and how sex workers are an important part of the labour movement.

The phrase sex work was initially conceived by Carol Leigh, an American sex worker, artist, health promoter and activist in the late 1970s. Leigh performed under the name Scarlot Harlot, and first used the phrase in her one-woman play, The Adventures of Scarlot Harlot, also known as The Demystification of The Sex Work Industry. The play begins with Scarlot shouting, “Sex workers unite!” Leigh went on to use and ask that it be used in feminist organizing meetings during the 1970s and 80s.

The phrase sex work and the surrounding vocabulary changes are important because previous wording (prostitute, whore) is demeaning and pejorative. These words are widely used as an insult, mostly towards women and femmes, whether they are sex workers or not. Rooted in misogyny, these words aim to shame us into compliance in terms of how women are supposed to behave sexually, and in the way we dress–proverbial scarlet letters, if you will. For a more in depth analysis, there is an excellent primer by Stella, a sex work advocacy organization based in Montreal.

Like many other marginalized groups, sex workers believe that language matters, and aim to reduce stigma by introducing new or better wording to describe themselves. At the same time, there is also a reclaiming of pejorative words in the same way that other equity seeking groups reclaim them. In the same way that some women call their friends “my bitches,” I’m part of a WhatsApp text group called “les putes,” which is French for “the whores.”

Decades later, in 2017, Leigh reflects on the phrase while being interviewed for the ACT UP Oral History Project:

People have spoken about coining a term. I also feel like I helped launch an identity. There’s always been that identity of sex worker libertine really, or a sex worker who’s not ashamed and that’s part of it, but to launch it as a contemporary identity rooted in labour is something that hadn’t happened before.

Keep in mind that the Stonewall riots, which were a reaction to police brutality against the LGBTQ+ community, happened in 1969. Marsha P. Johnson and Sylvia Rivera, both instrumental figures in the gay liberation movement and in the Stonewall riots, were both racialized, transgender sex workers.

Another historically significant act of sex worker resistance was the 1975 occupation of Saint–Nizier church in Lyon, France. On June 2, 1975, approximately 150 sex workers occupied the church for eight days. They were protesting increased police surveillance and brutality that followed an investigation into the police force. It uncovered corruption in the Lyon police force, some of whom were tried for pimping. Solidarity church occupations sprung up all over France, most notably, the feminist philosopher Simone de Beauvoir showed in Paris in support of the occupation.

What did the sex workers occupying the church want? The same thing that sex workers and sex work advocacy organizations want today: full decriminalization of sex work, access to government supports when times are tough (such as access to CERB during the pandemic), and the recognition by the criminal justice system, government and the public that it’s poverty that’s an inherent danger to society, and not sex work.

There have been, of course, other, no less important protests and brilliant labour organizing moments in the global south, each of which deserve their own column. Sex workers have managed to become part of the mainstream labour movement. In India, sex workers’ unions are part of broader coalitions of unions. In Nicaragua, the organization Girasoles de Nicaragua (Sunflowers of Nicaragua) also belongs to a larger union that represents precarious/informal economy workers. What’s even more notable is that their members serve as judicial facilitators, a type of peer worker who advocates that sex workers are treated fairly in their interactions with the criminal justice system.

Sex workers show up and support racialized and other communities that face systemic oppression. We supported the movement for gay liberation. We supported our communities and each other during numerous public health crises—AIDS, COVID-19, and now monkeypox. We help organize harm reduction outreach, mutual aid, Slut Walks and other gender based violence prevention initiatives. We always show up for sexual and reproductive freedoms.

When we try to unionize our strip clubs, when we fight to keep our massage parlors open, when we push for full decriminalization of sex work so we can live and work in safety and dignity, show your solidarity with sex workers. We are part of the working class—show up for us!

Natasha Darling is a pseudonym to protect the author’s true identity from the stigma and harm associated with her sex work. Darling is a stripper and community organiser based in Toronto.