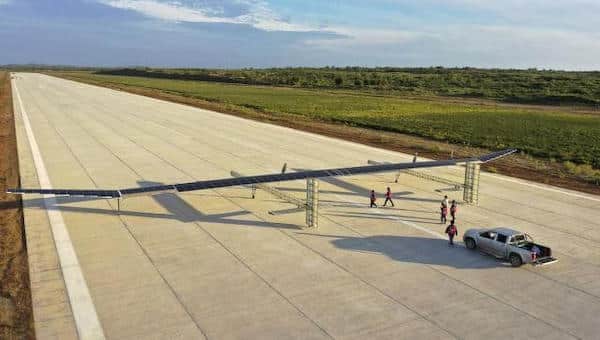 In a big step toward green development, China has built its first solar-powered large unmanned aerial vehicle. The drone successfully carried out its maiden flight on Saturday. It took off from an airport in Yulin, northwest China’s Shaanxi province and landed smoothly after 26 minutes airborne with all systems operating normally, according to a report in state-run Global Times.

Maiden flight! "QIMINGXING 50" is the first large-sized UAV powered only by solar energy. Another step towards green development. pic.twitter.com/DoNwXhbbPx

How does the drone use solar energy?

The Qimingxing-50 (Morning Star) is the country’s first major unmanned aerial vehicle platform that is all-electric and solely powered by solar energy.

It is also the first high-altitude, low-speed drone with an ultrahigh aspect ratio produced by the Chinese aviation sector. The Aviation Industry Corporation of China (AVIC), the developer of the drone, said that it could stay in the air for an extended period using efficient, clean, and environmentally friendly solar energy.

With a wingspan of 164 feet, the drone is designed to fly at altitudes of more than 20 km above the Earth’s surface where there is stable airflow with no clouds. As a result, it can make the maximum use of solar equipment to stay functional for longer durations. According to AVIC, the UAV can keep flying even during periods of overnight darkness, reports South China Morning Post. The drone’s chief designer Zhu Shengli told the publication that it can operate without a break for months, even years.

What can the Qimingxing-50 drone be used for?

Shengli referred to the drone as a quasi-satellite, noting that it will be used for high-altitude surveillance, forest fire monitoring, atmospheric environmental inspection, aerial mapping, communication signal relay, and other tasks.

The Qimingxing-50 can conduct very long endurance flights near space, a Chinese aerospace expert told the Global Times. It can be used for reconnaissance, monitoring, surveying and communications relay missions when satellite services are not available in emergencies—for time-sensitive operations and during conflicts.

Satellite services are not always available because of limited numbers and relatively fixed schedules of overhead passes. For time-sensitive missions, near-space drones can offset those disadvantages, the expert told Global Times, noting that satellite services could also get sabotaged in wartime, so near-space drones can replace them in that scenario.

An aerial drone is also cheaper than a satellite.

How will it give an edge to the Chinese army?

The People’s Liberation Army has in the past displayed the WZ-8 high-altitude reconnaissance drone capable of near-space flight at high speed. However, it has limited endurance. The Qimingxing-50’s long endurance and low-speed characteristics could be good complementation, the state media reports.

The successful flight of the Qimingxing-50 will encourage China to develop more large solar-powered unmanned aerial vehicles, thus increasing its ability to perform tasks in near space and over far oceans and seas.

“The Chinese aviation industry will seize the opportunity to increase investment in innovative research and development, accelerating the development of large solar-powered unmanned aircraft, as well as continue to lead the development of independent innovation in related industries,” AVIC said.

Do other nations have similar drones?

The United States and the United Kingdom are among the nations that have built solar-powered drones that can soar as high as 20,000 metres. In July, the U.S. army helped test a solar-powered, near-space Airbus Zephyr S drone that set a new record by being airborne for 42 days.

In August 2001, the U.S. Helios mode set a new record for the highest altitude a solar-powered drone has ever reached—29,524 metres. The Helios Prototype is a remotely controlled flying wing aircraft developed under NASA’s Environmental Research Aircraft and Sensor Technology programme, reports Eurasiantimes