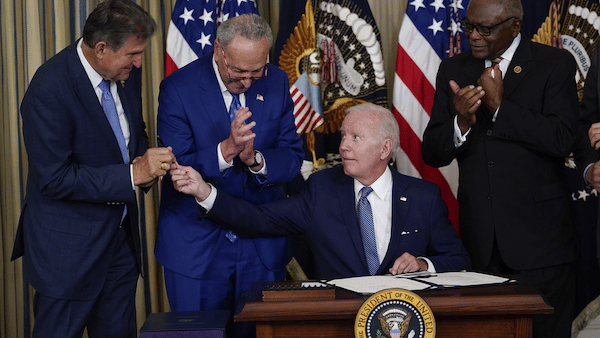 In June, the Biden administration made an announcement that irked fossil fuel companies and utilities: Federal regulators would begin reinstating a rule empowering states and tribes to protect waterways against pollution from energy development.

The apparent shift in priorities comes as energy companies have poured big money into Democratic campaign coffers, and as former staffers for top Democrats are lobbying for fossil fuel clients. One of the largest natural gas pipeline companies is now celebrating the Biden administration’s “tailwinds” for the fossil fuel industry amid the worsening climate crisis.

The situation has scrambled congressional politics: Some Democrats who once attacked the Trump administration’s rollback of longstanding environmental protections are now backing the secret deal that could make that rollback permanent.

The tension between President Joe Biden’s environmental regulators and the “permitting reform” side deal reflects the outsized power of Sen. Joe Manchin (D-W.Va.), Congress’s top recipient of fossil fuel industry campaign cash. The West Virginia coal magnate conditioned his Senate vote for the Inflation Reduction Act on an agreement to separately pass a “permitting reform” bill that could make it more difficult for communities to use the Clean Water Act and other environmental laws to protect their water resources from new energy infrastructure.

“This is a reckless piece of legislation that would undermine President Biden’s climate goals, as well as efforts within the administration to protect waterways and states’ rights to protect their waterways from damaging fossil fuel projects,” Jim Walsh, policy director at Food and Water Watch, told The Lever.

Constructing pipelines through waterways poses ecological risks from drilling fluid leaks, large removals of soil and sediment, erosion, or other types of disruption. For instance, just last month the pipeline company Energy Transfer was convicted of criminal charges for massive water contamination caused by the construction of its Mariner East natural gas pipeline network in Pennsylvania.

Additionally, when it comes to oil infrastructure, once pipelines are constructed, leaks and spills also pose a threat to water supplies: Since 1986, pipeline accidents have been spilling more than 3 million gallons a year in the United States, according to federal data compiled by the Center for Biological Diversity.

A Battle Over Local Authority

The Biden administration has spent months attempting to resurrect local authority under the 50-year-old Clean Water Act in the wake of President Donald Trump’s efforts to dismantle it–a move bolstered by the Supreme Court this spring.

That saga began in 2020. That year, as $63 million of fossil fuel industry cash flooded into Republican coffers, Trump’s Environmental Protection Agency (EPA) limited the power of states and tribes to enforce Section 401 of the Clean Water Act, which was written to ensure new energy infrastructure would not violate local water pollution laws. Trump’s new rules were designed to bypass opposition from state legislatures to fossil fuel projects, after a trio of such projects were blocked or delayed in New York, Washington, and Oregon.

A slew of states and environmental groups sued to block the Trump rule from taking effect, and in 2021, a district court in California vacated the rule. But this spring, the Supreme Court reinstated the Trump rule through the so-called shadow docket.

Before the Trump changes, “Section 401 was used all the time to attach conditions to projects,” Patrick Hunter, senior attorney at the Southern Environmental Law Center, told The Lever.

In June, Biden’s EPA proposed a new rule, supported by 65 environmental groups, that would return authority to states and tribes to impose conditions on federal permits for infrastructure projects if they would impact local waterways.

“For 50 years, the Clean Water Act has protected water resources that are essential to thriving communities, vibrant ecosystems, and sustainable economic growth,” said Michael Regan, head of the EPA, in a statement on the proposed rule.

EPA’s proposed rule builds on this foundation by empowering states, territories, and Tribes to use Congressionally granted authority to protect precious water resources while supporting much-needed infrastructure projects that create jobs and bolster our economy.

Hunter noted that Biden’s proposed rule is an even-handed way to “require whoever is building the project to provide more information up front with their certification request–so that actually has an opportunity to make things run more efficiently.”

That is apparently unacceptable to the powerful corporate lobbies that went to work to try to stop the initiative.

The U.S. Chamber of Commerce, the National Association of Manufacturers, and CMS Energy, a natural gas company, all reported lobbying on Section 401 of the Clean Water Act in the second quarter of 2022.

Natural gas pipeline companies submitted scathing comments on the rule, arguing it would give states and tribes too much power to slow down or block projects. They didn’t mince their words in pointing out that the rule could interfere with their ambitions to ramp up natural gas production, especially for export to Europe.

Under the prior regime, states blocked energy infrastructure projects that were in the public interest of both individual states and the nation as a whole for reasons unrelated to water quality, such as for the project’s perceived climate change impacts or general opposition to fossil fuels.

A coalition of utility companies, including NextEra Energy, one of the developers of the Mountain Valley Pipeline in West Virginia and a top Democratic donor, also asked the EPA to retain key components of the Trump rule.

Williams Companies, the largest natural gas supplier in the U.S., argued in a comment letter that the proposed rule would interfere with Biden’s efforts to ramp up natural gas exports to Europe in the face of dwindling supply from Russia.

“President Biden made robust energy supply commitments to the European Commission that will require a rapid expansion of our domestic energy infrastructure,” the company wrote to the EPA.

If the United States is to support the natural gas supply commitment President Biden made to our European Allies, the EPA must rescind this Proposed Rule and propose a rule that better aligns with the commitments and goals set forth by President Biden.

“This Is Something The Republican Party Has Wanted”

While Biden’s EPA rule is currently moving forward, fossil fuel companies may still get the victory they’ve been seeking, in the form of the Manchin side deal that could render the EPA initiative moot.

Last week, the Biden administration began portraying that deal as a win for renewable energy.

“We support the permitting reform bill, which will help us realize the benefits of the historic investments in the Inflation Reduction Act and the Bipartisan Infrastructure Law as well,” said White House Press Secretary Karine Jean-Pierre.

We want to see it enacted.

However, Manchin made clear the permitting deal is a GOP priority designed to hasten approval of fossil fuel infrastructure.

“This is something the Republican Party has wanted for the last five to seven years I’ve been with them,” Manchin said about the permitting legislation, whose leaked text was emblazoned with an American Petroleum Institute watermark.

Manchin is particularly interested in expediting the Mountain Valley Pipeline, a natural gas pipeline that cuts through West Virginia, and that critics say would result in gas emissions equal to 26 new coal plants.

That pipeline was originally held up by the very Clean Water Act provisions that Biden’s EPA rule aims to restore, as the Natural Gas Supply Association, a lobbying group for natural gas companies, said in a comment on the proposed Biden rule.

To be sure, the leaked draft of the pipeline deal differs from the Biden EPA rule in a number of ways, including by adjusting the amount of time states and tribes have to certify permits. While the timing issues are technical–they deal, for example, with when the clock starts on the one-year period that states and tribes have to certify permits–the implications are huge for projects, and a fierce battle is now underway in Congress.

Last week, 77 House Democrats released a letter calling on their party leaders to keep permitting reforms out of an unrelated stopgap spending measure. Senate Majority Leader Chuck Schumer (D-N.Y.), Congress’ top recipient of utility industry cash, responded by pledging to include the deal in that spending bill, as Manchin has reportedly been enlisting the help of fossil fuel CEOs to pressure lawmakers.

House leaders have said they are waiting to see the final text of the permitting deal to decide whether to include it in the spending measure.

Then on Monday, Republicans released their own permitting reform proposal, which would codify Trump’s 2020 version of the Clean Water Act rule into law. That industry-parroting proposal could help Democratic leaders cast Manchin’s pipeline deal as a moderate compromise.

Following The Money And Lobbying Trail

All of the lobbying and policy zig-zagging has happened amid a flood of cash from the energy industry.

In the 2022 election cycle, Democratic candidates and committees have vacuumed in more than $13 million from donors in the fossil fuel, utility, and pipeline industries. Schumer, Manchin, and Democrats’ Senate and House campaign committees have together accepted more than $760,000 from donors at NextEra, the conglomerate leading the Mountain Valley Pipeline project.

Manchin’s former chief of staff was recently hired as a lobbyist at the namesake firm of a former House Energy and Commerce Committee staffer who helped sculpt federal energy legislation. He has been lobbying for a separate pipeline giant and an oil conglomerate. Manchin’s former energy adviser is also now lobbying for two pipeline conglomerates and a utility company. Similarly, a former Schumer staffer has also been lobbying on those issues for a major utility firm.

As that lobbying blitz has intensified, some Democratic lawmakers who lambasted Trump’s repeal of the original Clean Water Act rule and praised Biden’s proposed rule are now backing the still-secret permitting reform deal.

“The Clean Water Act quite clearly gives states, territories, and Tribes the ability to protect their water quality when projects are permitted or licensed,” said Sen. Tom Carper (D-Del.), chairman of the Senate Committee on Environment and Public Works, in a statement on the proposed Biden rule.

I commend Administrator Regan and the technical experts at EPA for taking a prudent step to help these governments act to address local water quality.

Carper is now backing the permitting reform deal. His office did not respond to a request for comment. 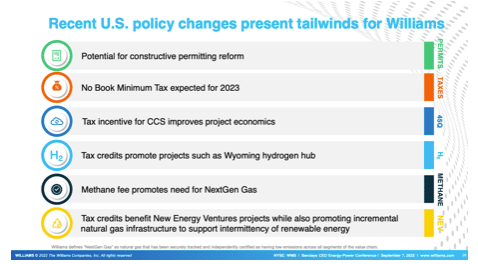 Meanwhile, the fossil fuel industry is celebrating its policy victories. At an energy conference in early September, Williams Companies CEO Alan Armstrong said Biden and the Democrats are creating favorable conditions for his company.

A slide on a presentation, headlined “Recent U.S. policy changes present tailwinds for Williams,” included a list of benefits from the Inflation Reduction Act, as well as “potential for constructive permitting reform.”