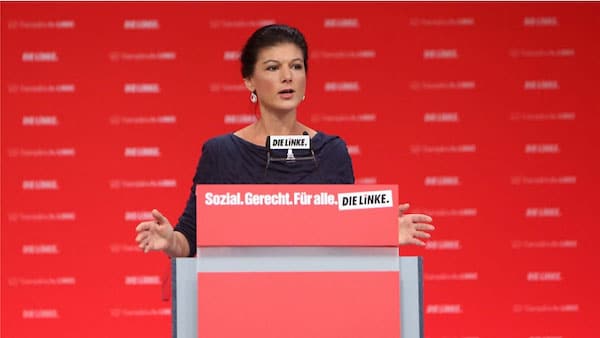 Sahra Wagenknecht speaks at a conference in 2017. | Die Linke

Former Die Linke co-chair Sahra Wagenknecht, among the German Left Party’s most famous politicians, has accused the government of causing a “social and economic catastrophe” through its sanctions on Russia.

Wagenknecht, writing in the German newspaper Junge Welt, said that one in three German businesses were facing bankruptcy, blackouts could not be ruled out over the winter,

and while oil and armaments companies are reporting record profits, consumers in Germany are supposed to pay even more for a gas surcharge, which Economy Minister Robert Habeck had the energy lobby dictate to him.

The MP’s article follows a challenge to the government in the Bundestag on Thursday, when she called it “the stupidest government in Europe” for starting an economic war with its main energy supplier.

She wrote, “The traffic light is steering our country” toward economic doom. “Traffic light” refers party colors of the governing coalition of Social Democrats (red), the right-wing Free Democratic Party (yellow), and the Green Party (green).

“The idea that we are punishing Putin by impoverishing millions of families in Germany and destroying our industry while Gazprom is making record profits—how stupid is that?” she asked, calling for Habeck to resign.

Despite a backlash to her speech from some Die Linke politicians, who said the sanctions are an appropriate response to Russia’s invasion of Ukraine, Wagenknecht argued in Junge Welt that “Europe, and Germany in particular, have a bad hand in the sanctions poker with Russia. It would be crazy to keep bidding until China comes into play.

But anyone who calls for an end to the sanctions spiral and calls for negotiations runs the risk of being defamed as a Kremlin propagandist. The debate is sick.

She pointed to some of the absurdities currently playing out in Germany’s politics. “Those who support peace are on the right, those who advocate military harshness are on the left?” she asked incredulously.

The former leader of Die Linke questioned why left-wing people are denounced as Putin supporters or for being supposedly close to the extreme right when they demand an end to the failing sanctions regime, but the politicians of the Christian Democratic Union can institute harsher policies toward unemployed people but face no accusations for echoing fascist demands.

Wagenknecht hit out at Green Party foreign minister Annalena Baerbock and CDU leader Friedrich Merz—who have all been enthusiastic in their support for the war—as well as critics in her own party.

“The answer to the ‘America First’ policy of Baerbock, Merz & Co, is not ‘Deutschland Über Alles’ (‘Germany over all,’ Germany’s Nazi-era anthem)—any more than we can support Russian nationalists just because we hate fascists in Ukraine,” she said, in a swipe at the far-right Alternative for Germany (AfD) party, which her Die Linke critics accused her of assisting because it also backs an end to sanctions.

Entering the debate on whether the left should mobilize for social protests against the government when the far right was also doing so, she said:

We must not leave a day of the week or a good argument to the right. Anyone who gives up correct and popular positions just because some of them are also represented by the AfD has already lost the fight before it even started.

This article features material from Morning Star and Junge Welt.