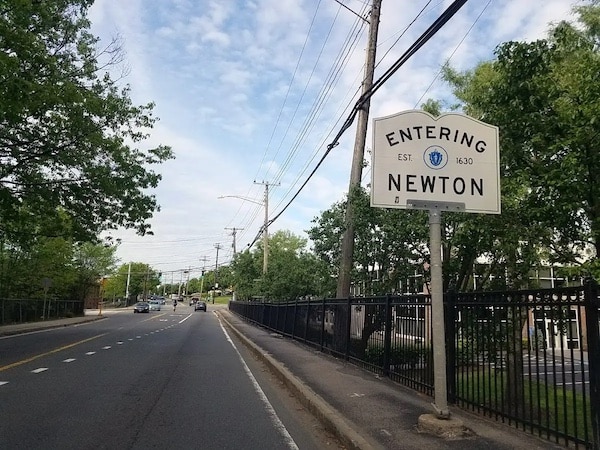 Newton1, MA, settled in 1630, is today an affluent suburb of Boston with a poulation of ~87,000. Built on seven hills, Newton was one of America’s earliest commuter suburbs. The Boston and Worcester railroad reached it in 1830, and Bostonian businessmen built hilltop homes. “These early commuters needed sufficient wealth to employ a groom and keep horses, to drive them from their hilltop homes to the station.” Further suburbanization came with streetcars in the 1870s, and automobiles in the 1920s.

In appointments roughly a year apart, President Biden enlisted [Newton residents Rochelle] Walensky and then [Ashish] Jha to help lead the nation’s fight against COVID-19–Walensky as director of the Centers for Disease Control and Prevention right at the start of his presidency, and Jha more recently to be White House coronavirus response coordinator.

Their ascension from spending their spare time assisting neighbors to occupying some of the highest posts in the federal public health response reflects a larger reality brought about by the two-year war against the pandemic. While Massachusetts has long sent its brightest political stars to Washington, the pandemic has created a new demand in the halls of power for the world-class medical expertise concentrated in the Greater Boston area.

Both Walensky and Jha–quintessially PMC–have children in the Newton Public School system. Barbara and John Ehrenreich, who coined the term “PMC,” write that “the PMC’s orignal dream was a society ruled by reason and led by public-spirited intellectuals” (the phrase “our democracy,” emphasis “our,” encapsulates this idea). So here we have an interesting little natural experiment. Is there any contradiction between public roles that Walensky and Jha play as high administration officials, and the private roles they play as parents? Let’s look at the record.

Both Walensky and Jha, as highly credentialed medical professionals, consulted to Newton and the Newton Public Schools (NPS). From Newton’s Mayor Ruthanne Fuller3:

From day one, we paid attention to the science and were in constant contact with public health and infectious disease experts including NPS parents, Drs. Rochelle Walensky and Ashish Jha. We listened carefully and updated our guidelines as the understanding of the virus and its transmission evolved. Our school community was reassured when the Medical Advisory Committee [sic] was formally established.

Jha served on the Medical Advisory Group (MAG) for NPS (first meeting, August, 2, 2021; final recommendation February 15, 2022, all available on the NPS website). Jha is listed as an attendee in the minutes for only one meeting, on November 8, 2021. These minutes are terrible, not what one would have expected from a meeting with Newton’s demographic. Minutes (says Roberts Rules) are a record of what is done at a meeting, not what is said; my father impressed this lesson upon me. These minutes are a record of what was said. Nevertheless, some of the things said that were recorded are interesting:

Agree that we are going to be living with this risk and making choices around what risk we think is tolerable. Even though infections are mild in vaccinated individuals, there are more impacts (quarantine, contact tracing, etc.) Each positive case is a lot of work and so we have to consider that every case creates a lot of work and is impactful. We will get to the point where we are living with it and that is less impactful.

Here we have the ideology for both “living with Covid” and “personal risk assessment” adopted bubbling up as a group consensus in the heart of the PMC country, as early as November 8, 2021. (I do not know when that noxious phrase “personal risk assessment” first emerged, but alert reader John Zelnicker first used it on May 26, 2022, a reasonable indicator for when it had infested the zeitgeist, at least regarding Covid. If readers have earlier sightings, please add in comments.)

Given minutes like those taken at NPS, we cannot document personal responsibility for NPS Covid policy regarding anybody, let alone Jha and Walensky, even though Jha was a MAG member. However, given the enormous deference shown to both by NPS and Newton’s mayor, I think it’s fair to assume that any policy either disagreed with would not have been adopted. Anyhow, Jha put his name on the MAG recommendations. Here they are, from August 16, 2021:

Universal masking was, naturally, abandoned by the good folks at NPS after a decent interval4, as indeed the ideology of “living with Covid” and “personal risk assessment” would suggest. However, I wish to draw your attention to the highlighted “ventilation.” I need not recapitulate for NC readers the importance of ventilation in fighting SARS-CoV0-2, an airborne disease. It seems that the city of Newton agrees, both with MAG and with NC readers. Ruthanne Fuller once more:

I invested $5 million in ventilation upgrades at every school. Under the direction of the City’s Public Buildings Department, the work was done incredibly fast. Newton is now the gold standard for other communities working to improve ventilation.

In fact, every Newton school has its own ventilation dashboard. A Google search for “corsi rosenthal box +newton massachusetts” returns no hits. I guess in Newton, MA, they don’t need them.

But wait. Plot twist. Please return to the MAG recommendations. You will see that not only is “ventilation” highlighted, but “should continue” is highlighted as well. So when did NPS’s $5 million investment begin? As it turns out, NPS decided to invest in ventilation on September 20th, 2020, far before the MAG committee made its recommendation. From the City of Newton Public Buildings Department on project completion, March 21, 2021:

The HVAC project seems to have been initiated from the bottom up, because of parent pressure, to which the Newton Buildings Department, the City Council, and the NPS responded. (You can be sure that if any public figures had been the drivers, we’d have seen their names). From the Boston Globe:

“Air quality has been something that has been raised by a whole bunch of folks for a number of months now,” Councilor Marc Laredo of Ward 7 said during the Zoom meeting. “Where in the school system is the responsibility for undertaking this work, and where did it fall down?

In order to ensure all classrooms’ HVAC units meet airflow standards, [Newton Commissioner of Public Buildings Josh Morse] said the city contacted 75 ventilation contractors throughout the Northeast and plans to finish testing and servicing classrooms within six to eight weeks.

“I am speaking as much to parents as I am to the council–I will move heaven and earth to get this done as fast as possible,” Morse said. “I assure you that not a second had gone by that I am not working on this since this past week.”

Quoting further from the City of Newton Public Buildings Department

Note the emphasis on “fresh air” as a metric5.

So, after our plot twist, what have we learned?

I must leave to a later date an explanation of how Jha and Walensky’s public and private roles are so grotesquely, indeed murderously, contradictory. But I will end on a more optimistic note.

Newton is the quintessential PMC town. Readers have mentioned that the phrase “PMC” tends to stereotype. A more sophisticated way of saying that is that “PMC” is a synecdoche: Part for whole. A certain subset of the PMC is taken, because of properties shared by that subset, as a proxy for the whole class. I had earlier urged a dichotomy–this is a binary, therefore wrong, but let’s roll with it for now —between the “hegemonic” and the “exceptional” members of the PMC, where the hegemonic PMC are the part taken for the whole. I think our little natural experiment has turned out to provide us, after the plot twist, with examples of both subclasses. Jha and Walensky are clearly hegemonic PMC, as shown by their high offices, the deference shown to them, their erasure of a life-saving paradigm, their invincible albeit credentialed stupidity, and so forth. The anonymous parents who forced the ventilation issue would be “exceptional,” in both senses6, but most importantly because they had to force their way into the discourse and take control of it, as they did.

This is a more optimistic conclusion than I thought I would come to when I began, but I think there’s something to it. Even in wealthy Newton, people can follow the science of an airborne disease.