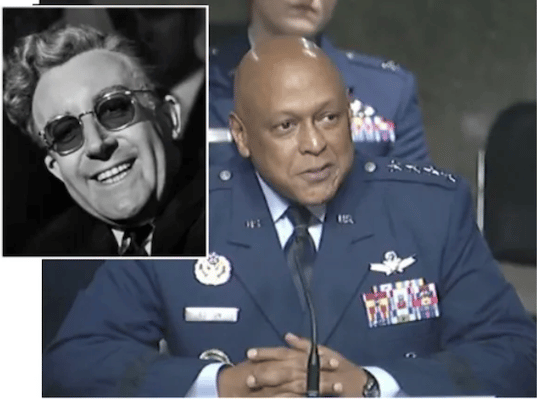 The scenario presented in the film, unfortunately, is not inconceivable today given the Dr. Strangelove type characters who are prevalent in the upper-ranks of the U.S. military and political establishment.

He responded that if confirmed as STRATCOM commander, his role would be to “ensure that the 150,000 men and women supporting strategic command are prepared to do what some folks think may be unthinkable”—that is to deploy weapons from the U.S. nuclear arsenal.

Later in the hearing, Senator Joni Ernst (R-IO) asked Cotton whether in light of the 2018 National Defense Strategy’s conclusion that the U.S. would struggle to win a war with China over Taiwan, “the president should have flexible nuclear options to prevent conventional defeat at the hands of our adversaries in this particular scenario.”

Cotton replied: “yes I do.”

Cotton’s predecessor, Carl J. Richard, would have likely responded in the same way. Last year, he wrote in the U.S. Naval Institute’s monthly magazine that the U.S. military had to “shift its principal assumption from ‘nuclear employment is not possible’ to ‘nuclear employment is a very real possibility,’” in the face of threats from Russia and China.

The son of an Air Force Master Sergeant who served in the Korean War, Anthony Cotton grew up in Dudley, North Carolina and was commissioned in the Air Force through ROTC at North Carolina State University in 1986.

Besides specifying his intent on preparing U.S. forces to wage nuclear war, Cotton used his confirmation hearing to make a pitch for an even bigger budget for the U.S. nuclear arsenal—when the U.S. government is already slated to spend $634 billion over the 2021-2030 period, for an average of $60 billion per year, according to the Congressional Budget Office.

According to Cotton, “for the first time since 1945, the first time for us as a nation, we have two near-peer nuclear adversaries [China and Russia] [and will have to] roll up our sleeves to ensure that we are doing everything we can strategy-wise to [deal with] two.”

Cotton said that the U.S. nuclear arsenal was helping “constrain” Russia’s actions in Ukraine and could serve as a bulwark against a Chinese takeover of Taiwan. “I absolutely believe that our nuclear deterrent force held,” he said. “We did not see Russia do anything with our NATO partners. We may have heard the rhetoric, but I think at the end of the day, Russia and China both understand that we have a strong, resilient nuclear force that is offering deterrence to ourselves and extended deterrence to our allies.”

Such logic obscures the fact that it was the U.S. that provoked conflicts with Russia in China in the first place—and has provoked the new nuclear arms race which could end with the obliteration of much of planet earth with people like Cotton in positions of authority.