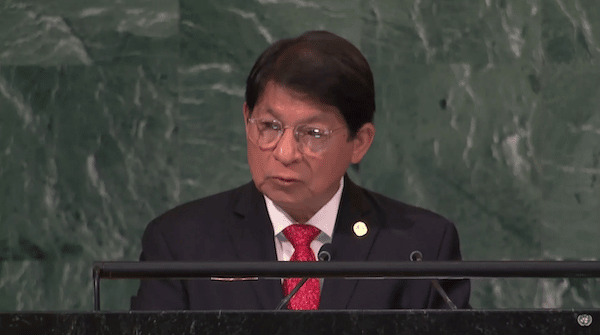 Nicaragua’s Sandinista government used its platform at the United Nations General Assembly to call for a global rebellion against the “imperialist and capitalist system” that is “bleeding the world dry.”

“It is time to say enough to the hypocritical imperialism that politicizes, falsifies, and denigrates human rights, that they themselves violate and deny every day,” declared Nicaraguan Foreign Minister Denis Moncada.

“Imperialism and its coercive actions are anti-life, in all spheres, and because of this, they are contrary to international law,” he added.

Nicaragua delivered the most revolutionary speech at the UN:

"It's time to reject criminal blockades; all illegal, arbitrary, aggressive sanctions," which expose "the perversion of an imperialist and capitalist system" that is "bleeding the world dry" 🔥 pic.twitter.com/ALrbDt5hNc

In his September 26 UN speech, Moncada proclaimed, “A better, just, multipolar world” is “already being built, and we are here to keep creating it, and to defend it.”

It is time to say enough, and to rebel and keep rebelling against the innate evil of capitalism, that suffocates the majority and brutally enriches a few.

It is time to transcend the egoism that kills, that murders millions of human beings in the world, who are subjected to the cruelty of poverty and extreme poverty, by the barbarous instincts of the beasts, the great powers that seek to continue and perpetuate their dominion at the expense of hunger, lack of health, destruction of the climate, ignorance, war.

It is time to keep rejecting the criminal blockades; the aggressions of so-called sanctions, which are illegal, arbitrary, illicit; which clearly show the perversion of the imperialist and capitalist system and model, that continue punishing the bleeding the world dry, while organizations that should defend it just watch, doing nothing.

It is time to make important the principal of the sovereign equality of states in all international organizations and fora, so that multipolar and non-aligned world that we have so yearned for can be reality, can be strengthened, can grow and include all of us.

It is time to make important the world of dialogue and peace, of justice and solidarity, of brotherhood and good will.

Nicaragua's Sandinista government at the UN 🔥

"It's time to say enough is enough, to rebel against the innate evil of capitalism, which suffocates the majority while brutally enriching the few"

Reject "the hypocritical imperialism" that violates human rights "on a daily basis" pic.twitter.com/TeVxR0w7KO

The Nicaraguan foreign minister emphasized the long history of his people’s struggle against foreign conquest.

“The heroic, dignified, sovereign, free people” of Nicaragua have worked with other peoples to “confront, throughout the centuries, the colonial and imperial avarice and greed that, from Europe and the north of this wounded continent [the Americas], has shown no mercy, attacking, intervening, invading, occupying our sacred lands,” he said.

“The invaders have left Nicaragua, expelled and defeated by the bravery of Nicaraguan patriotism,” he added.

We should unite to keep confronting the great social, economic, climatic, cultural, and security challenges, which endanger the human family every day.

Nicaragua has worked with other peoples to "confront, throughout the centuries, the colonial and imperial avarice and greed that, from Europe and the north of this wounded continent [the Americas], has shown no mercy, attacking, intervening, invading, occupying our sacred lands" pic.twitter.com/i1wsFK0DCU

At the United Nations, Nicaragua’s Sandinista government sent its “committed embrace of solidarity with dignified and brave Venezuela, with heroic Cuba, with the noble and historic battles of the Palestinian people, the Islamic Revolution of Iran’s families, the grand ongoing battle of the Russian Federation against fascism and for security, integrity, and peace.”

Moncada likewise stressed Nicaragua’s “embrace of solidarity with the admirable resistance and just development of the People’s Republic of China, that causes such discomfort, concern, and envy for the enemies of the common good.”

Nicaragua similarly reaffirmed its solidarity with “Syria, the Sahrawi Arab Democratic Republic, Belarus, the peoples of Asia, Africa, and Our America and the Caribbean.”