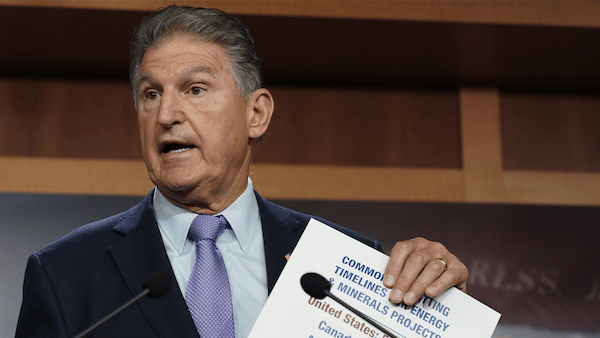 The Lever recently reported on the curiously absent data behind Sen. Joe Manchin’s (D-W.Va.) proposal to expedite fossil fuel pipelines. Somehow, Democratic lawmakers have been advancing the permitting legislation—and portraying it as an environmental victory—with no comprehensive projections showing how its buildout of oil and gas infrastructure would change overall greenhouse gas emissions.

That information vacuum was suddenly filled on the eve of the first Senate votes on Manchin’s bill: On Tuesday, the environmental group Oil Change International released an analysis asserting that the legislation could wipe out all of the alleged emissions reductions from other parts of the permitting bill that boost clean energy—and vastly increase overall emissions amid the climate crisis.

While fossil-fuel-industry-linked lobbying groups like the American Clean Power Association tout the bill’s clean energy provisions, the new study tells a darker tale. It finds that the the Mountain Valley Pipeline that would be expedited by the bill, plus emissions from other proposed fossil fuel terminals now in the permitting process, would amount to 665 million metric tons of greenhouse gasses per year. That’s more than five times the purported emissions reductions that bill proponents claim will come from the legislation’s provisions supporting new transmission lines.

Manchin and Senate Majority Leader Chuck Schumer (D-N.Y.), the two lead proponents of the permitting measure, are respectively Congress’s top recipients of campaign cash from the fossil fuel and utilities industries. Together they have raked in more than $340,000 from the energy company leading the Mountain Valley Pipeline project.

Some critics have previously questioned Oil Change International’s data by insisting that new fossil fuel supplies replace other sources of fossil fuel, and that therefore overall emissions may not increase as much as claimed. In its statement releasing the study, Oil Change International counters by arguing that the bill’s pipeline provisions lock in and guarantee fossil fuel emissions for the long haul. The group also notes how some groups touting the clean energy provisions of the legislation haven’t bothered to estimate the emissions effects of the fossil fuel provisions.

“While the bill would likely help speed up some transmission buildout, the actual impact of the legislation on transmission expansion is unknown. It’s possible the necessary expansion could be achieved with existing permitting requirements, or that critical and useful regulatory reforms could be enacted under existing laws without the legislation,” the group wrote.

The emissions from new fossil fuel projects are all but guaranteed. Once built, these pipelines and export facilities will pump millions of tons of [carbon dioxide] into the atmosphere each year for decades to come.

The latter assertion is backed up by a recent study from Michigan Tech researchers, which found that existing pipelines are responsible for nearly half of the United States’ greenhouse gas emissions, because that infrastructure speeds up the distribution and use of fossil fuels.