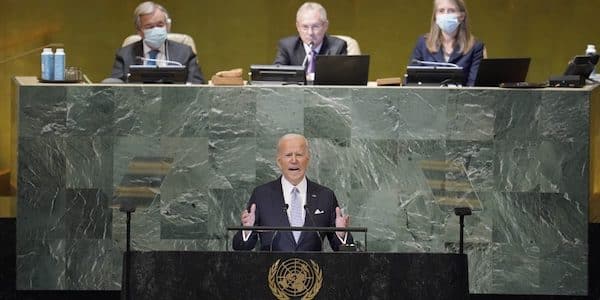 It takes a special kind of hubris for a president of the United States to speak at the United Nations, the place where international law is supposed to be upheld and defended. Yet the representative of the worst violator of international law predictably shows up every September when the United Nations General Assembly holds its annual session. The late Venezuelan president Hugo Chavez got it right when he spoke in 2006:

Yesterday, ladies and gentlemen, from this rostrum, the president of the United States, the gentleman to whom I refer as the devil, came here, talking as if he owned the world. Truly. As the owner of the world. I think we could call a psychiatrist to analyze yesterday’s statement made by the president of the United States. As the spokesman of imperialism, he came to share his nostrums, to try to preserve the current pattern of domination, exploitation, and pillage of the peoples of the world.

Chavez is no longer with us, and Joe Biden is the third man to serve as U.S. president since George W. Bush was compared to the devil. But the words are as true now as they were then. This year Biden’s speech was replete with the usual drivel about the United States being some sort of guarantor of peace. Among other things, he said that permanent members of the Security Council should “…refrain from the use of the veto, except in rare, extraordinary situations, to ensure that the Council remains credible and effective.”

Perhaps Biden thinks that the rest of the world has amnesia. Every time the members of UN General Assembly condemn Israeli apartheid it is the U.S. that predictably steps in with a Security Council veto to protect its ally and partner in crime. Twelve of the 14 U.S. vetoes since 2000 were made on behalf of Israel. Any U.S. proposal calling for change in the Security Council structure is intended to weaken China and Russia’s veto power and to bring in its own puppets such as Germany and Japan.

Of course, Russia bashing was the focus of Biden’s speech with false claims of a nuclear threat, unprovoked attack, and accusations of war crimes. He didn’t mention well documented Ukrainian war crimes such as the shelling of civilians in Donetsk. Worse yet, there was no acknowledgement that Ukraine and Russia were negotiating until the U.S. and the U.K. intervened and scuttled the talks. Biden’s speech was full of projection and every condemnation leveled against Russia or Iran or Venezuela was instead an indictment of U.S. behavior in the world.

The world has changed but American administrations don’t. They continue behaving as if the U.S. is still the all-powerful hegemon that will always get what it wants. It does have the world’s reserve currency and the biggest military, but it can’t control the world without doing harm to itself and its allies. The United States cynically used the United Nations to call for a “no fly zone” over Libya, which allowed it to destroy that nation. Partnerships with jihadists brought destruction to Libya and to Syria, causing a humanitarian disaster which displaced millions of people. The 2014 coup against the elected government of Ukraine has turned into all out war. The sanctions targeting Russian gas and oil have raised prices all over the world and damaged European economies more than any others. The ruble has risen in value and the euro has declined. Even hegemons don’t always get their way.

While Washington rails against Moscow, it continues to ignore UN votes to end sanctions against Cuba. This year Cuba will again submit a resolution calling on the U.S. to end its trade embargo. During the 2021 vote only the U.S. and Israel voted no. The next vote will have the same result, and reveal Biden’s words, “The United States will always promote human rights and the values enshrined in the U.N. Charter in our own country and around the world,” as a sham.

The United Nations is in serious need of reform. It is part of the Core Group which chooses presidents for Haiti and acts against the will of its people. Biden mentioned Haiti in passing and called for an end to gang violence. But that violence is the direct result of U.S. interventions there. The 75-year history of allowing the permanent Security Council members to dictate to the rest of the world should change. But who should do the changing? Not the U.S., which always has ulterior motives and dirty hands.

Biden did make one valid statement. “Because if nations can pursue their imperial ambitions without consequences, then we put at risk everything this very institution stands for.” It is unfortunate that the U.S. ignores the consequences of its own actions.