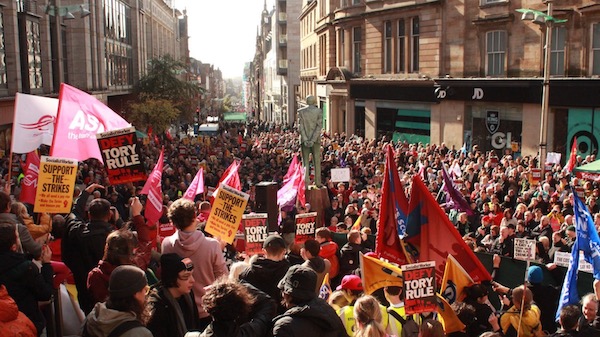 On Saturday, October 1, massive mobilizations were witnessed in the UK against the Tory (Conservative Party) government for failing to tackle the ongoing cost of living crisis. According to reports, over 100,000 people participated in the protests called by the Enough is Enough campaign across the country. Protests were held in over 50 cities, including London, Manchester, Liverpool, Glasgow, Cardiff, Brighton, and Nottingham. On Sunday, trade unions and left-wing sections joined a protest demonstration called People’s Assembly Against Austerity outside the venue of the Conservative Party conference in Birmingham.

The protesters expressed solidarity with postal and rail workers who are on strike against poor pay and work conditions. Cadre of all major trade unions in the country, including the National Union of Rail, Maritime and Transport Workers (RMT), Communication Workers Union (CWU), and Junior Doctors movement, as well as political parties like the Communist Party of Britain (CPB) and the Young Communist League (YCL-Britain) expressed solidarity with the protests and participated in the mobilizations. 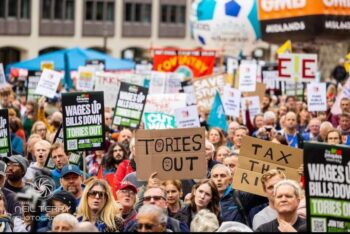 Mobilization in Birmingham on October 2. (Photo: via People’s Assembly Against Austerity)

Working class sections across Europe have been organizing protests demanding concrete solutions from governments to tackle the cost of living crisis and soaring inflation in food and fuel prices. Due to the ongoing Russia-Ukraine war and sanctions imposed by the European Union (EU) and the U.S. on Russian energy exports to Europe, energy prices have skyrocketed in European countries. Profiteering by multinational energy producers and suppliers amid this crisis has worsened the situation.

The Enough is Enough Campaign in the UK was started by trade unions and community organizations to raise their voice against the cost of living crisis and to defend the rights and dignity of working class sections in the country. The campaign is being supported by unions like the CWU and the RMT, and community organizations including ACORN UK and the Right to Food campaign, among others. Several left-wing politicians like members of parliament from the Labour Party Zarah Sultana and Ian Byrne  have also supported the movement. The campaign has put forth a set of demands to tackle the cost of living crisis, which include: (1) a real pay rise; (2) slashing of energy bills; (3) ending food poverty; (4) provision of decent and affordable homes for all; and (5) taxing the rich.

While addressing the protest rally at the King’s Cross in London on Saturday, RMT leader Mick Lynch said,

The CPB has said,

Member of parliament from the Labour Party Jeremy Corbyn stated in support of the protests on Saturday,