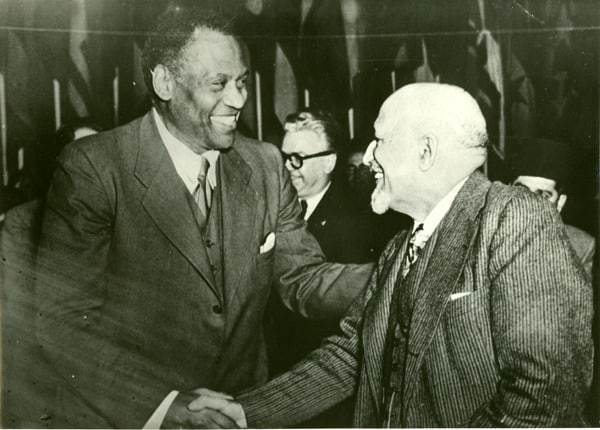 Many eyebrows have been raised as a result of the surge to power of neo-fascists in Italy.  Unfortunately, our community seemingly has the eyebrows of Whoopy Goldberg (meaning none) and thus far, the response has been radio silence.  This is nothing new; since the Compromise of 1954 (not unlike the companion Compromise of 1850, which actually strengthened enslavers—contrary to advertisement—and instigated war) where in return for anti-Jim Crow concessions, tossed overboard were the internationalists among us— Paul Robeson in the first place— many of our leading organizations and intellectuals have steered clear of consistent global engagement.  This approach was debilitated from its inception but now it borders on doom for to ignore global events in today’s world is veritably suicidal.

Take Italy for example.  After the execution of fascism’s founder, Benito Mussolini, during the height of World War II in the 1940s, the left surged and by the time of the pivotal 1947 election, U.S. imperialism felt constrained to do to the Italian-American community what had happened to African-Americans.  Progressive and radical Italian-Americans e.g. Vito Marcantonio (Robeson’s comrade and former Congressman) were marginalized and Italian-American families were recruited to contact relatives abroad in order to encourage them to vote against the Communist Party (one of the strongest postwar parties in the world) and the left more generally.

This “worked” and the Christian Democrats ascended but by the 1970s, Prime Minister Aldo Moro was willing to execute the “Historic Compromise” and rule in conjunction with the Communists—but was kidnapped and executed with the apparent acquiescence of U.S. Imperialism.  When a leading figure like Moro is murdered, this sends a message worldwide:  as was said in the antebellum U.S.:  you only have to beat one slave to keep the entire plantation in line.

It simply won’t do to suggest that this was an understandable reaction to a Moscow ally coming to power since the Communists in Italy pioneered in so-called “Euro-Communism,” distancing themselves from the Soviet Union—which did not spare them.

Moreover, Italian creators of the left had significant influence on this side of the Atlantic, especially filmmakers.  Think of Gillo Pontecorvo whose “Battle of Algiers” was used as political education by the Black Panther Party and whose “Burn!”  starring Marlon Brando, ranks as a pillar of the sadly slender cinema of slavery and slave revolts.  Or think of Francesco Rosi, whose “Hands Over the City” (English translation) is one of the more profound political films ever committed to celluloid.  Even Bernardo Bertolucci was able to attain purchase in Hollywood—see “1900” and “The Last Emperor” and “Last Tango in Paris” for example.

But today Italy is to be ruled by neo-fascists for as the left was undermined, like a seesaw the ultra-right rose.  Needless to say, the incoming Prime Minister is wildly anti-African, manipulating a Twitter feed that would make the Ku Klux Klan blush.

As one who lived through these decades, I look back—at times—with anger.  I recall vividly having debates during the Cold War as to whether the conflict between Moscow and Washington was actually real since leaders in both capitals were “white”—this at a time when nuclear missiles were on hair-trigger.  With verbal gymnastics and ignorance, ignored by too many brothers and sisters, was Soviet arming of fighters in Southern Africa to combat apartheid and colonialism, especially in Angola—the unknown homeland of many of us.

I had to learn more than I ever wanted to know about Djilas (Yugoslav dissident:  yes, I know Belgrade broke with Moscow in the late 1940s but logic was not the strong suit of my interlocutors) and Kautsky (used to attack Lenin) until I realized that argument was beside the point:  the point was a militant version of Booker T. Washington-style accommodation, i.e. accommodating to the anti-Jim Crow concessions without running afoul of U.S. imperialism.

Days ago in Moscow, President Putin gave a startling speech with profound historical import:  turning his back or being forced to turn his back on centuries of Russian policy since Peter the Great and turning eastward toward China.  If we had more attuned Black Nationalists in our community, they could enrich the discourse by limning the “split” among those defined as “white,” as their predecessors did in 1917.  But I imagine what will ensue will be a replay of the Cold War—the split is not real, despite Putin suggesting that the atomic bombing of Hiroshima and Nagasaki in Japan in 1945 sets a “precedent.”  Or our intellectuals and leaders have been so vitiated by the Compromise of 1954 that not only have they forgotten how to pay attention to global events—they do not even know they are supposed to do so.  Again, a muscle tends to atrophy when not utilized.

This is taking place as major trade partners of U.S. imperialism are imploding, including the British economy while Germany—the erstwhile locomotive of the European Union—is being inveigled into turning away from its business model of cheap energy from Russia to propel a manufacturing engine that exports to China, since the Big Boss in Washington now has both of these nations in the crosshairs (not to mention wishing to accomplish what a wing of the U.S. ruling elite has seen as a longtime ambition:  destabilizing the European Union).

Thus, this small planet may be at an inflection point, whereby the ascendancy of the Anglo-sphere commencing in the 16th century is arriving at a crashing conclusion, while ascending are the BRICS [Brazil, Russia, India, China, South Africa] and the Shanghai Cooperation Organization [Russia and China in the first instance].

Meanwhile, there are those in our community who manage the feat of at once lamenting the rightward shift domestically while either incapable of or afraid to pursue global options to arrest same:  Shame!

Dr. Gerald Horne is a prolific author and African-American historian who currently holds the John J. and Rebecca Moores Chair of History and African American Studies at the University of Houston. His most recent book is The Counter Revolution of 1836: Texas Slavery & Jim Crow and the Roots of American Fascism.