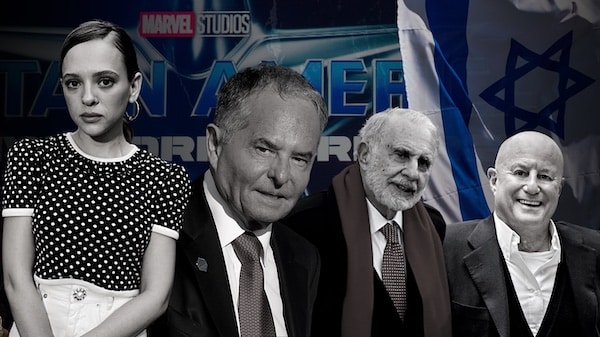 “By glorifying the Israeli army & police, Marvel is promoting Israel’s violence against Palestinians & enabling the continued oppression of millions of Palestinians living under Israel’s authoritarian military rule,” the Institute for Middle East Understanding wrote in a tweet.

Following the backlash, Marvel said in a statement to Variety that it will take a “new approach” to the character, in a perceived attempt to placate criticisms.

Many individuals who have held or still maintain roles at Marvel are associated with the Israeli military, Israeli intelligence and Zionist institutions that uphold apartheid. For instance, Isaac Perlmutter, the current chairman of Marvel Entertainment who served on Marvel Comics’ board of directors until 1995, grew up in 1948-occupied Palestine (or modern-day Israel) and served in the Israeli military during the 1967 Six-Day War. Avi Arad, the CEO of Marvel Entertainment, also grew up in modern-day Israel and served in the Israeli army during the Six-Day War.

Along with his wife, Laura, Perlmutter oversees a foundation that contributes to several pro-Israel causes such as the Anti-Defamation League, Friends of the Israel Defense Forces, the America-Israel Friendship League, the Jewish Federation of Palm Beach County in Florida, and the Jewish Agency for Israel. The Laura and Isaac Perlmutter Foundation has also supported the Hebrew University and Israel’s Technion Institute of Technology.

The Perlmutters are also heavily linked to the Trump family. In 2016, their organization donated $25,000 to the Eric Trump Foundation. According to Open Secrets, a campaign finance tracker, in 2016, Laura Perlmutter donated $5,400 to former President Donald Trump’s campaign and nearly $450,000 to the Trump Victory Committee, a joint fundraising initiative by the Trump campaign and the Republican National Committee. The couple then gave more than $1 million to the Trump Victory Committee in 2019 and 2020 and contributed another $11,200 to Trump’s reelection campaign in 2019.

Isaac Perlmutter donated $5 million in 2016 to the Great America PAC, a super political action committee (PAC) supporting Trump. The couple also contributed $10.5 million in 2020 to American First Action, a PAC supporting Trump. In addition, Both Perlmutters have backed several state and federal Republican entities and candidates over the years. The hefty donations did not go unnoticed, earning Isaac a spot in shaping policies at the Department of Veteran Affairs during Trump’s time in office, according to an investigation by ProPublica.

Both Perelman and Icahn were revealed as potential donors to former Israeli Prime Minister Benjamin Netanyahu’s campaign ahead of the 2007 primary elections. Perelman’s foundation has also contributed to several pro-Israel organizations, including the Chabad Lubavitch’s social services agency, Machne Israel, and the Jewish National Fund, which is a leading organization in establishing illegal Israeli settlements and displacing Palestinians.

Film producer Amy Pascal, who plays a key role in coordinating the collaboration between Sony Pictures and Marvel Studios, a subsidiary of Marvel Entertainment, is a known Israel lobbyist. Leaked Sony emails reveal Pascal received email updates on the security situation in Israel from the now-defunct, right-wing advocacy group, The Israel Project.

She also received emails from Creative Community for Peace, an organization fighting the Boycott, Divestment and Sanctions movement in the entertainment industry. In 2014, Pascal and her husband also received an email invitation to attend a private event about the situation in Israel with the Israeli Consul General of Los Angeles, David Siegel, and president and CEO of the Jewish Federation of Greater Los Angeles, Jay Sanderson.

Israeli propaganda has become deeply entrenched in Hollywood, in part because of many prominent entertainment oligarchs’ pro-Israel beliefs, as well as the global success of Israeli television series like “Shtisel” and “Fauda”. The latter television show glamorized the Israeli army, specifically the Mista’arvim unit, an undercover military wing designed to infiltrate Palestinian communities.

Israel’ only contribution to “entertainment” is to export shows and figures that commit war crimes – because that’s what they do best. War crimes are not entertaining. #FreePalestine https://t.co/Da1537aQ9b

Israeli actress Gal Gadot’s casting as Wonder Woman also helped normalize Israel on the world stage, especially given her pride in serving in the Israeli military. Now Haas, who is set to play Sabra, is poised to be another example of Hollywood normalizing the apartheid state. Haas has been involved with pro-Israel organization, StandWithUs, participating in a StandWithUs Facebook live to talk about her success. StandWithUs presents itself as an educational resource on Israel, but the organization is responsible for silencing the Palestinian narrative in schools and blacklisting pro-Palestine voices on campuses. Haas also served in the Israeli military’s theater.

The Mossad works with the U.S. entertainment industry to promote an attractive image of Israel abroad. SPYLEGENDS–an agency made up of former Mossad spies and other ex-security officials–was established in 2021 to advise Hollywood on spy films. The Mossad has also openly welcomed the slew of thrillers showcasing the intelligence agency as sleek and prestigious in an effort to boost recruitment.

Marvel’s nationalist sentiment does not end with Israel. Cloaked in mesmerizing cinematography and flashy special effects, the American company has also been instrumental in promoting U.S. militarism with its comic book universe.

In “Captain America: The First Avenger”, the U.S. army allowed Marvel Studios to film at Camp Edward, a military training site. The 2003 “Hulk” film also benefited from access to military bases and loaned military equipment. “Iron Man” and its sequel created iconic scenes by borrowing the military’s weaponry as well. These Marvel movies — along with “Captain America: Winter Soldier” and “Captain Marvel” — received funding from the U.S. Department of Defense to help build their blockbuster enterprise.

The military’s support, however, came with a price. The Pentagon approved the scripts for “Hulk” and “Iron Man”, cutting out unfavorable references to the military, such as their experimentation on humans and dropping herbicides on South East Asia during the Vietnam War.

With the “Captain America” franchise, the army supported the Marvel movie, seeing it as “building resiliency” and considering the Captain America character to hold values of a modern U.S. soldier. “Captain Marvel” was the Air Force public relations department’s dream. The film’s release coincided with an Air Force recruitment campaign, using feminism as a way to sugar coat “Captain Marvel’s” obvious militarism. The recruitment effort clearly worked with the Air Force seeing the highest number of female applicants to the Air Force Academy in five years.

With Marvel’s U.S. military propaganda in full swing, it seems the studio is now turning its focus to Israeli nationalism. Whether Sabra will don an Israeli-flag-inspired suit remains to be seen, but what is apparent is Marvel’s close relationship with Israel and the U.S. military is manufacturing a fantasy world dripping in real-world imperialism.

Jessica Buxbaum is a Jerusalem-based journalist for MintPress News covering Palestine, Israel, and Syria. Her work has been featured in Middle East Eye, The New Arab and Gulf News.