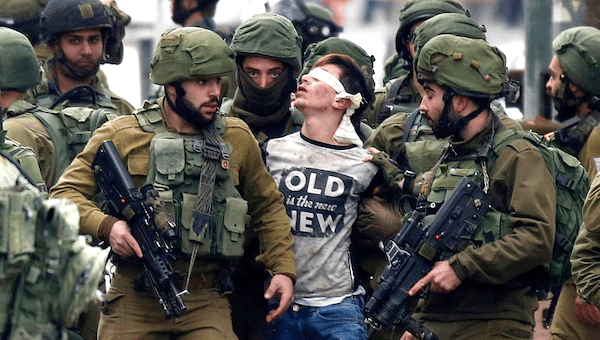 I want you to look at this picture. No, please don’t look away. Look at it carefully. Beyond the huddle of hefty military figures, armed to the teeth with their machine guns—one pressed threateningly against the young boy’s hips—do you see what I see? Obviously, a shocking abuse of power: a mob of soldiers, poised to kill, if not assault, a vulnerable, lightly clad child. But look again. The devil is in the detail. The angle of the youth’s body says much. His neck is strained, the head tilts backwards under pressure; the shoulder and t-shirt are being tugged so that the collar of the boy’s t-shirt is askew and cuts the neck below the Adam’s apple. Jostled by the force of bodies shoving him from behind, he appears to be staggering. Blindfolded, he has lost his footing. His bloodied cheek and chin foretell the shape of things to come. He will be led at gunpoint to a hellish destination—one of Israel’s detention centres for Palestinian youth; and he will be subjected to torture and merciless interrogation.

The boy in the photo, 16-year-old Fawzi al-Juneidi, was indeed detained in the West Bank city of Hebron in December 2017. He was beaten by soldiers during his arrest (Middle East Eye provides the grim details), and released on bail 20 days later. Israel’s military routinely carries out this standard punitive practice, which typically involves unspeakable abuse. Evidence collected by a host of NGOs and human rights organizations, such as the Israeli organization Ha Moked makes this plain.

In tracking Israel’s arrest of Palestinian children, from the moment these (often) young teens are seized from their homes to the moment they arrive at an interrogation facility, Ha Moked registers a consistent pattern. The detained children are typically blindfolded and handcuffed—“usually with their hands painfully tied behind their backs”—and are taken to a military vehicle. In reporting to the Electronic Intifada, Ha Moked notes: “During the ride, they are often beaten, humiliated, and sworn at by the soldier.” Rifle butts, shoes, and hands have been used to beat children. Injuries have included the breaking of one teenager’s jaw with the use of a rifle butt.

A few glimpses of what transpires in the torture chamber should suffice to confirm Israel’s abominable mistreatment of Palestinians. The depths of cruelty to which the Israel Defense Forces (IDF) and its entire penal apparatus have descended should shock Canadians—all Canadians. Indeed, the regularity of the IDF’s mistreatment of Palestinian children and the systemic nature of that abuse should cause widespread horror and anguish in the same way that the discovery of unmarked graves of residential school children both horrified and sickened the general public.

Most disturbing is the systematic and premeditated nature of violence against children. The arrest and detention of young teens in occupied Palestine is not incidental; it is a normalized and longstanding state-sanctioned practice, applied by an entire bureaucracy of military personnel, trained in administering pain to vulnerable youths. The hypocrisy of an army that deems itself the most moral in the world while intentionally maiming, injuring, and humiliating Palestinian children is breathtaking. The mind swirls to make sense of this.

Some have concluded that acts of hatred and physical violence inflicted by Israel’s military on Palestinian children are the result of intense indoctrination. Israel’s education system (1:35—4:53; 10:54—13:36) instills in its population the racist myth that all Palestinians (including children) are terrorists, deserving of harsh blows, humiliation, caging, medical neglect, starvation, etc. With this ideological psychosis, the IDF torturer (in collusion with a body of administrators, including medical staff) shields him/herself from bad conscience, and justifies committing acts of abuse in the name of eliminating the threatening force that s/he sees embodied in the child.

On September 30th, 2022, Canada’s National Day of Truth and Reconciliation, voices of residential school survivors were heard publicly recalling the torment of their early years, and vindicating their humanity against the appalling abuses they suffered at the hands of Christian churches. In 2022, non-indigenous Canadians have finally acknowledged the violence of their settler colonial state, one that degraded and devastated First Nations Peoples over two centuries. With this public acknowledgement, it behooves these same Canadians to connect the dots, to see that a comparable (though not identical) process of settler colonialism currently afflicting Palestine is utterly unconscionable and equally reprehensible.

To be clear, settler colonialism is not specific to one nation-state. As a political scourge, it marks the interconnected 19th-century development of nation-states across the globe. Its elimination must therefore also be global. Indeed, if freedom, recognition, and compensation are to be granted to the First Nations survivors of the 20th century, the same must be granted to 21st-century Palestinian children and their families. To this end, systems of racism and their administrators everywhere must be denounced and held accountable.

Such political work is already underway. Organizations throughout North America are acting as the tribunes of social justice. Parliamentary petitions have called upon the Canadian government to defend the rights of Palestinian children in the face of Israel’s violations. The egregious case of the imprisoned Ahmad Manasra, arrested on false charges at age 13, sentenced to 9.5 years, and now being held for months in solitary confinement, is at the forefront of this collective effort. With publicity growing apace around this awful case, there is hope that Canada will be pressured to demand an end to Israel’s heinous assault on the children of Palestine—a crime against humanity all-too-reminiscent of the evils inflicted on the indigenous peoples of Turtle Island.

Michelle Weinroth is a writer and teacher living in Ottawa.