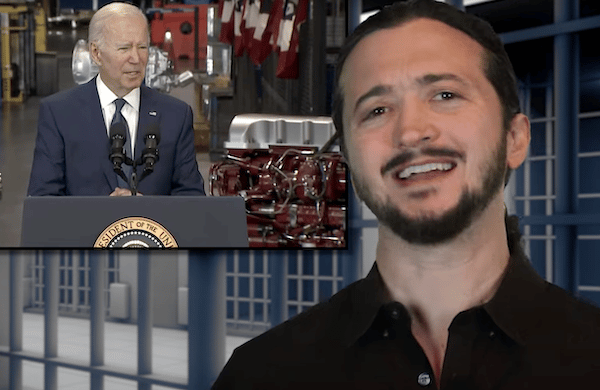 If you watched the mainstream media a few days ago, they lost their minds over President Biden’s incredible move to release thousands of people who were convicted of drug possession from prison!

Here are the words of the U.S.’s superhuman octogenarian president himself:

No one should be in prison just for using or possessing marijuana. It’s already legal in many states. And criminal records for marijuana possession have led to needless barriers to employment, to housing, and educational opportunities.

This guy’s a hero! I haven’t seen this many drug users celebrate since the Spongebob Squarepants movie came out in Imax.

Biden said he will pardon anyone convicted of simple federal marijuana possession between 1992 and 2021. So how many hundreds of thousands will be freed from our brutal prisons? How many souls has this courageous man freed from the jaws of confinement?

“Officials estimate about 6,500 people with federal convictions for simple possession of marijuana will benefit,” reported the BBC.

But that’s okay, at least it’s something! So how many of those 6,500 can walk out of prison right now and immediately hug President Biden?

Well, as the BBC continued,

No-one is currently in federal prison solely for possession of marijuana.

No one? Biden just freed no one! Well damn, what a brave, bold man! You know, I used to say the Democrats never do anything and never really change anything—I take all that back. I was so wrong. That was before I found out that without Joe Biden and the Democrats, no one would’ve been kept in prison. But luckily, they got no one out. And now no one can go back to living their life and loving the family they don’t have.

Also, in Biden’s little speech there, he forgot to mention that he “was a chief architect of the deadly, costly Drug War.”

We wouldn’t even be in this situation—where America is the largest prison state in the world—if it hadn’t been for Joe Biden and his insane quest to lock up as many black and brown people as possible!

Wow, Biden’s mission to solve the Drug War—a war against U.S. citizens—by freeing exactly no one from prison, is almost as good as his efforts to end the student debt crisis by erasing $10,000 of student loan debt for each borrower, except for those who won’t qualify after he walked back the original plan.

As reported by NPR,

An administration official tells NPR roughly 800,000 borrowers would now be excluded from relief. Though many more borrowers could end up getting less relief than they were entitled to under the old guidance.

Watch the full report above.

Lee Camp is an American stand-up comedian, writer, actor and activist. Camp is the host of Behind The Headlines’ new series: The Most Censored News With Lee Camp. He is a former comedy writer for the Onion and the Huffington Post and has been a touring stand-up comic for 20 years.