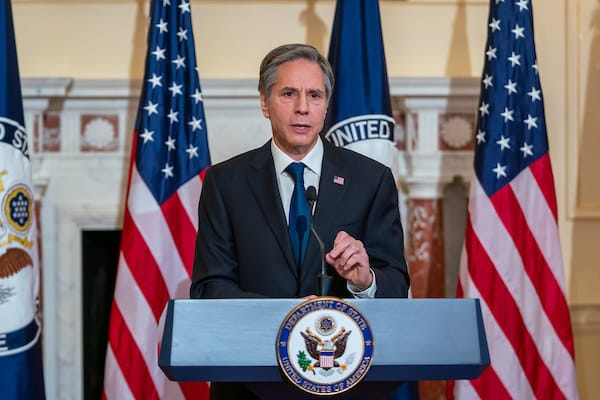 On Monday U.S. Secretary of State Tony Blinken made a curious remark:

Secretary of State Antony Blinken accused China of speeding up plans to seize Taiwan as Chinese President Xi Jinping looks set to secure a precedent-breaking third term at a Chinese Communist Party congress this week.“There has been a change in the approach from Beijing toward Taiwan in recent years,” Blinken told an event at Stanford University on Monday. This includes “a fundamental decision that the status quo was no longer acceptable and that Beijing was determined to pursue reunification on a much faster timeline,” he said. Blinken did not provide details about the claim of a shorter timeline and said China may be willing to use coercive means, a prospect that is “creating tremendous tensions.”

The Washington Post writer who formulated the above seems to be astonished that Blinken said such:

So am I. There is no evidence for Blinken’s claim. President Xi has recently touched on Taiwan is his opening speech to the 20th National Congress of Communist Party of China. But the first part of his remark was purely factual:

In the face of serious provocations from separatist activities by Taiwan independence forces and interference in Taiwan affairs by external forces, we have resolutely waged a major struggle against separatism and interference, demonstrating our strong determination and ability to safeguard national sovereignty and territorial integrity and oppose Taiwan independence.

The more important second part about reunification was boilerplate and did not differ from previous formulations:

We persist in striving for the prospect of peaceful reunification with the greatest sincerity. However, there is no commitment to renounce the use of force and the option to take all necessary measures is retained.The historical wheels of the rejuvenation of the nationalities are rolling forward and the complete reunification of the motherland must be realised and can certainly be realised.

It is though that China will seek the reunification with Taiwan some time before 2049, the hundred year anniversary of the founding of the People’s Republic of China. That is still a few years out and certainly not of imminent concern.

There is nothing in Xi’s speech that points to any ‘speeding up’ towards reunification.

There is also no ‘change in the approach from Beijing toward Taiwan in recent years’ as Blinken claims.

The only change has been on the U.S. side. It was Blinken who was hostile during his first meeting with China’s foreign minister in Alaska. It was his boss Biden who said four times that the U.S. would defend Taiwan militarily, a breach of standing agreements with China. Every time the White House later pulled back on Biden’s claim. It were also Biden and Blinken who let the Speaker of the House travel to Taiwan. That move was inappropriate as Pelosi is second in the presidential line of succession.

It were also Biden and Blinken who recently went nuclear with sanctions on China’s chip industry:

Every American executive and engineer working in China’s semiconductor manufacturing industry resigned yesterday, paralyzing Chinese manufacturing overnight. One round of sanctions from Biden did more damage than all four years of performative sanctioning under Trump.

Although American semiconductor exporters had to apply for licenses during the Trump years, licenses were approved within a month. With the new Biden sanctions, all American suppliers of IP blocks, components, and services departed overnight—thus cutting off all service [to China].

In the short term Biden’s move will increase the current supply constrains and thereby also increase inflation. In the long term it is likely to hurt the U.S. more than it will hurt China which will now build a completely independent chip industry.

But the sudden sanction move can also be seen as a declaration of war:

[W]hile the announcement was a complete surprise, it does fit with the much more extensive list of hostile U.S. actions towards China in the last few months. Some of these include:

While in no way exhaustive, the list should give the reader some sense of the uptick in belligerence that is presently aimed at Beijing. Hectoring China has become a full-time job which is not entirely unexpected as U.S.-China “containment” policy dates back as far as the Cold War.

What’s different now–as Biden’s 2022 National Security Strategy indicates–is that the U.S. sees itself in the midst of a “great power struggle” in which the primary enemy is China who is regarded as “the only competitor with both the intent and, increasingly, the capability to reshape the international order.” (NSS)

In other words, the Biden administration is admitting that we are at war with China and that we must use any means necessary to prevail in that conflict. As foreign policy analyst Andre Damon recently noted, the NSS is not a strategy for the defense of the Republic but a “blueprint for World War 3”.

When Blinken is lying about the alleged ‘much faster timeline’ Beijing does not have, he is trying to blame China for the change in a U.S.-China relationship that has suddenly became outright hostile.

But that change has come solely from the U.S. side.