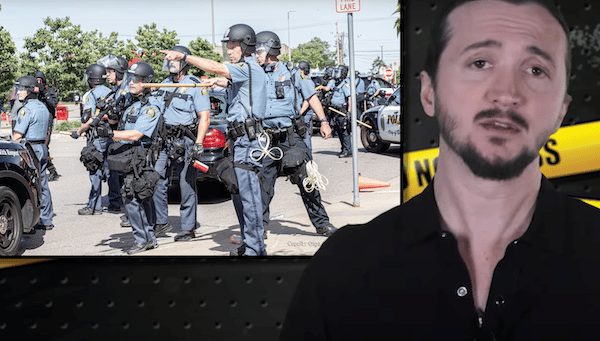 Most countries are far different from the U.S. when it comes to murderous police..

Denmark and Switzerland often have zero killings by police per year. Iceland has only had one murder by a police officer in its history.

This means U.S. police murder more people in the first few hours of each new year than Icelandic cops have murdered, ever. So I will admit, this sounds kind of bad for America. Almost as bad as that but a new report shows it’s far worse.

A month ago, the Department of Justice released a report about the number of people who die while in the custody of law enforcement.

That sounds like a real page-turner. As one article from The Appeal put it, “DOJ Admits It Has No Idea How Many People Die in Law Enforcement Custody.” So, that 1,000 people number is just the victims we bothered to count.

The report, authored by the Office of the Attorney General, offers an unprecedented accounting of the government’s neglect in tracking deaths in U.S. prisons and jails and at the hands of police … The federal government has failed to count thousands of deaths in law enforcement custody over the past three years…

How do you fail to track death? There’s a body laying there.

If the government has failed to count a lot of deaths—exactly how many deaths are we talking about here? As The New York Times reported in 2021,

Police killings in America have been undercounted by more than half over the past four decades, according to a new study … About 55 percent of fatal encounters with the police between 1980 and 2018 were listed as another cause of death.

So if police killings are undercounted by 55 percent, how many would that be during this year? Well, as of October 7, 2022, The Washington Post reports that 1,039 people have been killed by police already. If that were only 45 percent of the actual total, then in reality 1,890 people would have already been killed by our police this year!

The study, conducted by researchers at the University of Washington and published on Thursday in The Lancet, a major British medical journal, amounts to one of the most comprehensive looks at the scope of police violence in America, and the disproportionate impact on Black people.

How does this happen? How can such an extreme undercount of police killings take place? Well, for one thing, death certificates do not generally ask whether police officers were involved. So if a cop chokes someone to death, the certificate may just say “asphyxiation.” It likely will not say, “Roided-up sociopath with a badge strangled a guy!” And if the victim was Tasered to death, the certificate might read, “Heart attack brought on by excess electricity.”

Watch the full report above.