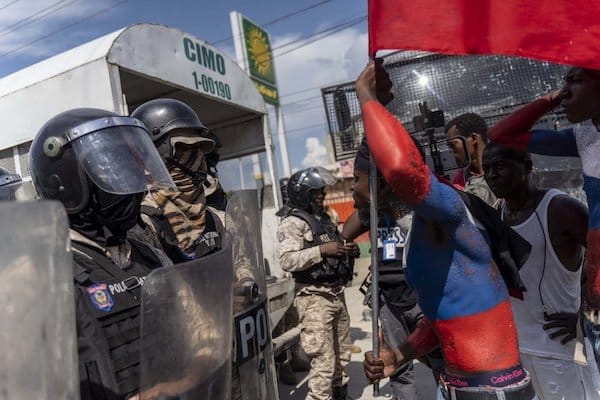 October 18, 2022–One day after the Black Alliance for Peace—and other individuals and groups from Haiti and the Haitian diaspora—requested that Russia and China oppose the Biden Administration’s UN Security Council resolution providing cover for another Western invasion of Haiti, the Security Council delayed consideration of the vote. The delay is a critical pause on a reckless, poorly-thought out, and potentially disastrous intervention into Haiti. In response to the delay, BAP’s Haiti-Americas team stated:

We welcome the decision by Chinese and Russian representatives to the security council to speak up against the U.S.-Mexico push for another foreign military invasion of Haiti. We must also note, with worry, that the call for a “Non-UN” armed force, with no oversight, to invade Haiti is extremely reckless, and demonstrates the contempt with which the west and its minions hold Haitian people. Haitian people do not want another U.S.-led foreign intervention; they want to assert their sovereignty and an end to imperialist meddling in their country.

As we stated in a release yesterday, we want to be clear: The crisis of Haiti is a crisis of imperialism.

The crisis is a result of consistent manipulation and intervention by the U.S., the Core Group, and aligned Western powers—with Mexico, Canada, the Dominican Republic, and the CARICOM nations assuming prominent roles.  The supposed “humanitarian” invasion that they are planning is not designed to serve the Haitian people and support their demands for sovereignty over their own affairs, but to bolster the illegitimate, criminal puppet government that they themselves have installed.

The Black Alliance for Peace, in alignment with the wishes of the Haitian masses and their supporters, absolutely stands against any foreign armed intervention in Haiti. We continue to demand an end to the ceaseless meddling in Haitian affairs by the United States and its alliance of interventionists. We hope our colleagues in the region who support democracy and self-determination will also stand with Haiti, and work toward establishing the Americas as a Zone of Peace by rejecting imperialism in all its forms.