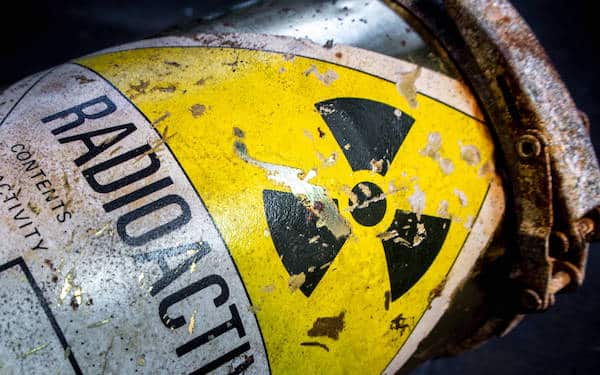 For several days now, the threat of Ukraine using a dirty bomb or destroying the Kakhovka dam has been causing an extremely dangerous rise in tension. By allowing Kiev to do whatever it wants, even the worst war crimes and terrorist acts, the West is encouraging Ukraine to continue playing with fire, at the risk of provoking a disaster that would go beyond the country’s borders.

On 23 October 2022, the Russian Defense Minister spoke by telephone with the Defense Ministers of the United States, France, the United Kingdom and Turkey. Sergei Shoigu discussed the situation in Ukraine, and in particular Russia’s concerns about possible provocations by Ukraine with the use of a dirty bomb (a conventional bomb surrounded by radioactive material that will be dispersed upon detonation).

The next day, the head of Russia’s CBRN (Nuclear, Radiological, Biological and Chemical) protection troops, Lieutenant General Igor Kirillov, held a press conference on the risk of a dirty bomb provocation by Ukraine. The aim is to try to isolate Moscow on the international scene by making Russia look like a terrorist state that has used nuclear weapons against a country that does not have them.

But in my view this is not the only goal for Kiev, London, Washington, or even Brussels. A dirty bomb provocation would allow Ukraine to secure Western support in terms of weapons and money, reinforcing the anti-Russian propaganda present in the West, and serving as a diversion from the growing social tensions that are becoming problematic in Europe.

The monstrous rise in energy bills as a result of sanctions against Russia and the sabotage of Nord Stream is becoming a major problem for European governments, which are now facing protests against higher energy prices and against support for Ukraine (with people understanding that the two are linked). And Kiev understands perfectly well that at some point Western governments will have to face a choice: try to ease social tensions by reducing or even stopping military and financial aid to Ukraine, or risk facing serious internal unrest that could lead to uncontrollable chaos or even the fall of the governments in charge (which would lead to the same consequence as choice n°1).

Moreover, in the United States, the mid-term elections are approaching and Joe Biden’s health is deteriorating rapidly (after shaking hands with invisible people, he falls asleep and mumbles sentences without any head or tail during his interviews). As a result, the Republicans have a chance to win these elections (the latest polls give them a slight lead over the Democrats), thus changing the political balance of the country. But some Republicans want to reduce aid to Ukraine.

Looking at all this, it becomes clear that the Ukrainian authorities need to do something spectacular to divert the attention of Western populations from the consequences of their countries’ support for Ukraine and to justify continued or even increased financial and military aid to Kiev.

To do this, Ukraine has two options. The first option is to destroy the dam at the Kakhovka hydroelectric power station, thereby flooding a large part of Kherson and surrounding towns and cutting off Russian troops from their reinforcements, in an attempt to recapture the town and achieve a major military victory that can be used in the media to obtain more weapons and more money. Aware of the risk of the Ukrainian army implementing this plan, the Russian authorities have called on Kherson’s civilians to evacuate the city to avoid casualties in the event of flooding, and have begun draining the reservoir to reduce potential damage.

And for those who think that such a plan seems crazy, and that the Ukrainian authorities would not go that far, here is a screenshot of two posts from the Telegram channel of the 35th brigade of the UAF (Ukrainian Armed Forces). 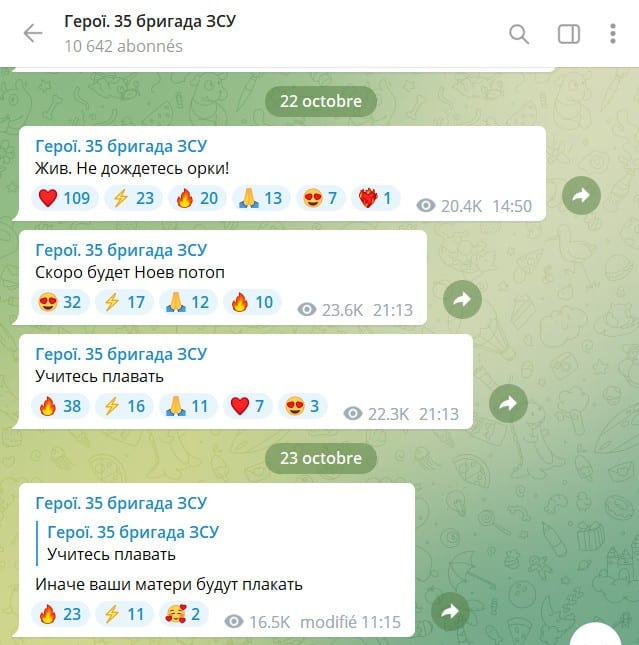 Translation: ‘Noah’s flood is coming’ (Скоро будет Ноев потоп) and then ‘Learn to swim’ (Учитесь плавать). I think it’s hard to make the message any clearer. Especially since at the same time the shelling of the Kakhovka hydroelectric power plant by the Ukrainian army continues.

This brings us to the second option that Kiev could use to its advantage: using a dirty bomb to accuse Russia of using nuclear weapons against Ukraine. If this plan seems even crazier than the first one, it should not be ruled out on the grounds of its apparent madness. Because if the use of a dirty bomb by Ukraine would inevitably cause deaths or pollution of part of its territory, these are not blocking parameters for the Ukrainian authorities. I recall that in 2020, a Ukrainian MP had proposed using dirty bombs against Russia and Hungary.

As a reminder, in April 2022, Ukraine shelled Kramatorsk, which is under its control, as civilians were evacuating the town by train, causing a bloodbath. On 11 August 2022, the Ukrainian army shelled a brewery in Donetsk, causing an ammonia leak, without worrying for a second about the consequences for civilians or the environment.

For months, the Ukrainian army has been bombing residential areas of Donbass towns with missiles containing “Petal” mines, which have already killed one civilian and injured 80 others, including three children. Not to mention the repeated terrorist attacks that have caused numerous victims among innocent civilians (the latest in Kherson killed a passer-by).

Finally, in eight months of conflict, the Ukrainian army has bombed 29 times, and attacked 10 times with drones the nuclear power plant of Zaporozhye, which is under Russian control, without ever worrying about the catastrophic consequences that such attacks could have, including for civilians and territories that are under Ukrainian control!

These few non-exhaustive examples show indisputably that Ukraine does not shy away from any method, even the dirtiest or most inhumane, if it serves its interests. Therefore, the information transmitted by the Russian Ministry of Defense is worrying.

“According to the information available, two Ukrainian organisations have received direct orders to create a dirty bomb. The work is in its final stage. In addition, we have information about contacts between the Ukrainian president’s office and representatives of the United Kingdom regarding the possible receipt of technologies for creating nuclear weapons,” said Lieutenant General Igor Kirillov.

It should be remembered that Ukraine has everything it needs to create a dirty bomb, between the three still-active nuclear power plants under its control in Rovno, Khmelnitski and Yuzhnooukrainsk (whose storage pools contain up to 1,500 tonnes of enriched uranium), and the former Chernobyl nuclear power plant (where more than 22,000 nuclear fuel assemblies are located). Ukraine also has more than 50,000 cubic meters of radioactive waste, and a mining and processing company that extracts up to 1,000 tonnes of uranium ore per year from several mines in the Kirovograd region.

Scientifically, the Kharkov Institute of Physics and Technology was involved in the USSR’s nuclear programme, and several test systems, including the Hurricane thermonuclear systems, are still in operation there. In addition, the Nuclear Research Institute of the National Academy of Sciences of Ukraine in Kiev has a BBP-M reactor, which is used for research involving high-level radioactive materials. It is this second institute, which is allegedly involved with the Eastern Mining and Processing Company, in the Kiev dirty bomb project, according to Russian Foreign Ministry spokeswoman Maria Zakharova.

According to the Russian Ministry of Defense, Ukraine is planning to pass off the use of its dirty bomb as the detonation of a low-yield Russian nuclear warhead containing highly enriched uranium in its payload. The aim is for the presence of radioactive isotopes in the air to be recorded by the sensors of the international monitoring system installed in Europe, and to accuse Russia of using tactical nuclear weapons against Ukraine.

For the moment, the Western countries contacted yesterday by the Russian Defense Minister are playing blind, pretending not to see Ukraine’s actions, just as they have not “seen” the Ukrainian army’s bombing of civilians in the Donbass for the past eight years. Except that here their pseudo blindness could have consequences of a completely different level.

As a result, on 24 October 2022 the Chief of Staff of the Russian Armed Forces and First Deputy Minister of Defense, Valery Gerassimov, held telephone talks with the British Chief of Defense Staff, Admiral Antony Radakin, regarding Ukraine’s possible use of a dirty bomb. Russia has also said it wants to raise the issue at the UN.

It is to be hoped that these steps will lead Ukraine to renounce its provocation (as other denunciations of future provocations have prevented many of them in the Donbass during the eight years of the war), and that the West will understand that this is an impassable red line, the violation of which could have terrible consequences for itself.