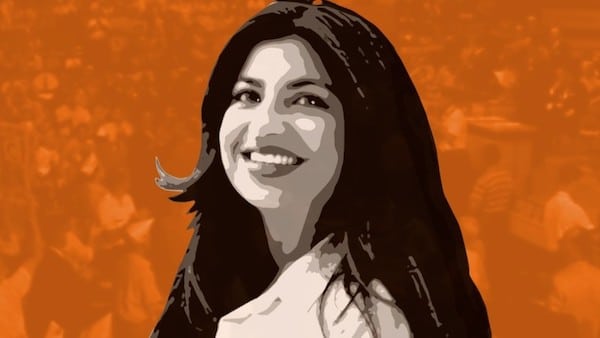 Climate and social justice advocate Anjali Appadurai was disqualified from running for the BC NDP leadership on October 19. (Image courtesy Anjali For BC NDP Leader/Facebook.)

In British Columbia, the last hopes for a progressive insurgency against the ossified leadership of the provincial NDP were scuppered on October 19.

Prior to that date, there were two candidates in the race to succeed sitting premier John Horgan. One was David Eby: housing minister, political moderate, and a party man to his bones who promised no fundamental change from the Horgan years. The other was Anjali Appadurai, the federal candidate for the Vancouver Granville riding and an outsider to BC NDP power structures. Appadurai’s campaign was an exciting venture for BC progressives, a left-wing insurgency campaign against the province’s ostensibly progressive ruling party.

During its five years in power, the Horgan government discredited the BC NDP to many young progressives due to, among other things, its backing of the UN-condemned Coastal GasLink pipeline and its support for the logging industry amidst the largest act of civil disobedience in Canadian history. Additionally, Alex Cosh notes that the Horgan government did not sufficiently address “the province’s drug-poisoning crisis, lacklustre investment in public services, and the increasing influence of for-profit health care in the public health system.”

In the midst of ecological ruin and capitalist decay, many voters in BC channelled their anger and disgust into support for Appadurai, who made opposition to unsustainable industry a central pillar of her campaign. In an interview with Jacobin, she stated:

This government has failed on climate, affordability, and on stopping the wealth accumulation that’s drawing money away from the working class and from the most vulnerable. It has failed on investing in the public services that are necessary to buffer us when inflation goes out of control, or when there are shocks in the economic system due to war or the pandemic. People don’t have the basics that they need for a good life, and that’s the job of the government.

Appadurai’s leadership run crystallized into a grassroots challenge to the compromised party establishment. Inevitably, the party struck back.

The BC NDP leaders immediately disliked Appadurai, viewing her as an outsider and an interloper, someone whose candidacy was disrupting what she called the “no-question-asked coronation” of Horgan’s successor, Eby. Eby himself did not do much to dispel accusations of entitlement. After Appadurai announced her candidacy, he stated:

I’m frustrated because… it delays moving into the office by several months.

A siege mentality developed among the old party hands of the BC NDP. They accused Appadurai of disrupting important party work by unnecessarily challenging Eby’s accession to the premiership. Ultimately, the accusation that brought an end to Appadurai’s candidacy was not anything she did to hurt the party, but the fact that she was drawing in too many new members.

With the campaign in full swing, the BC NDP’s chief electoral officer Elizabeth Cull recommended that Appadurai be disqualified, a measure that would ensure Eby’s victory as the only other candidate in the race. According to Cull, Appadurai’s association with Dogwood BC, a grassroots organization of climate activists, amounted to “serious improper conduct.”

Specifically, the Cull report argued that Appadurai violated election rules by working with the environmental group to convince former members of the BC Green Party to join the NDP and support her leadership run against Eby. The report also notes that the Eby campaign filed a complaint against Appadurai and brought forward evidence that was used as justification for her disqualification.

Appadurai’s campaign was bringing thousands of new members into the party. On one occasion, she stated that they had signed up 3,000 new members, increasing the party’s membership numbers from 11,000 to 14,000. As such, her campaign posed a threat to the entrenched leadership of the BC NDP, and on October 19, party executives voted to disqualify her from the competition.

For his part, Horgan threw his full support behind Eby and aggressively criticized Appadurai’s supporters. In the aftermath of the disqualification, he accused Appadurai’s supporters of “thuggery” and being “Green Party members” who “want to take over [the] party.” When Tyee journalist Andrew MacLeod asked why the list of party executives who expelled Appadurai is not available for the public to see, Horgan responded, “Leave them alone. They’re doing their job, volunteers, and they’re gonna be abused by a bunch of people who cheated and want to get away with it.” He then added, “I think I’m done here” and stormed out of what may be his final press conference as BC premier.

Writing for the National Observer, Avi Lewis opined that:

Appadurai’s disqualification is a nuclear option. It risks tainting the administration of the new premier, former Attorney General Dave Eby, and sends a message to a whole wave of NDP members that they are not welcome in the governing party. More ominously for the NDP, it unnecessarily hands the party’s opponents a cudgel that they will no doubt deploy relentlessly between now and the next provincial election in 2024.

By intervening in the leadership election in favour of Eby, and then refusing to reveal the names of the executives who voted to disqualify Appadurai, the BC NDP has confirmed the criticism that it is an indolent party averse to truly democratic grassroots input. A recent CTV News headline summarizes the secretive, anti-democratic nature of their actions this election: “NDP not releasing names of executives who decided BC’s next premier.”