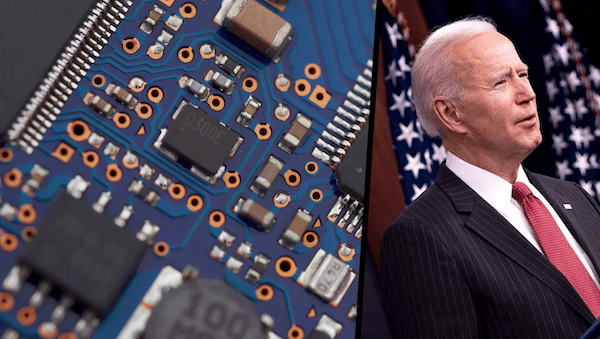 The U.S. government has imposed aggressive sanctions that aim to “kneecap” China’s tech sector and halt the country’s rise, Washington policymakers and industry analysts have admitted.

The Joe Biden administration took the extraordinarily aggressive action this October of blocking China from importing most semiconductors, machines to create chips, and supercomputer parts.

A former Pentagon official acknowledged that this was a “disproportionate” and “unilateral” attack, amounting to a “form of economic containment.”

He said this in an article in Foreign Policy, the magazine of the DC political class, titled “Biden Is Now All-In on Taking Out China.”

Jon Bateman, an ex analyst for the Defense Intelligence Agency (DIA) who served in several important policy roles in the Pentagon, wrote that U.S. officials have “imposed disproportionate measures” and “strong-armed others into compliance.”

Washington’s “mindset all but guarantees a continued march toward broad-based technological decoupling,” he concluded.

China’s technological rise will be slowed at any price.

Today, Bateman is a senior fellow in the technology and international affairs program at the Carnegie Endowment for International Peace, a powerful DC-based think tank that helps Washington craft policy—with plentiful funding from the U.S. government, its allies, large corporations and banks, and billionaire oligarch family foundations.

Bateman is by no means a pro-China advocate. In April, he published a report for Carnegie called “U.S.-China Technological ‘Decoupling’: A Strategy and Policy Framework.”

In the lengthy document, Bateman “offered a concrete picture of what centrist decoupling might look like and how implementation could work at the agency level.”

Bateman wrote the Foreign Policy article as part of a debate with more hard-line hawks in elite Washington policy-making circles. He warned that their “maximalist” strategy could backfire and hurt the U.S. and its allies, and instead promoted a more cautious, incrementalist approach.

“America’s restrictionists—zero-sum thinkers who urgently want to accelerate technological decoupling—have won the strategy debate inside the Biden administration,” he warned.

He acknowledged that Washington’s new cold war on China has been completely bipartisan, but “Donald Trump’s scattershot regulation and erratic public statements offered little clarity to allies, adversaries, and companies around the world,” whereas “Joe Biden’s actions have been more systematic.”

“The United States has waged low-grade economic warfare against China for at least four years now—firing volley after volley of tariffs, export controls, investment blocks, visa limits, and much more,” he wrote.

more so than any earlier U.S. action, reveal a single-minded focus on thwarting Chinese capabilities at a broad and fundamental level.

“Although framed as a national security measure, the primary damage to China will be economic, on a scale well out of proportion to Washington’s cited military and intelligence concerns,” he wrote.

The U.S. government imposed the new rules after limited consultation with partner countries and companies, proving that its quest to hobble China ranks well above concerns about the diplomatic or economic repercussions.

Bateman noted that the United States is trying to pressure allies to join its new cold war on China, leading an international campaign to economically isolate Beijing by building a “Chip 4” alliance with South Korea, Taiwan, and Japan—which control the vast majority of the global semiconductor industry.

With the announcement of new export control policies, the Biden administration has made its stance clear: China’s technological rise will be slowed at any price. https://t.co/74dKlNkFUp

Bateman’s fears that these aggressive new cold war policies could backfire have already come true. Washington’s rapid attempt to decouple the U.S. economy from China is taking a toll on U.S. universities.

At least 1,400 scientists of Chinese descent have left U.S. research institutions and instead gone to China, according to a report published this October by academics at Harvard, Princeton, and the Massachusetts Institute of Technology (MIT).

The latest U.S. salvo in the chip war against China will set back its domestic chipmakers by generations, while global suppliers of semiconductors and fab tools will incur billions of dollars in lost sales because of a giant dent in demand out of China, analysts told EE Times.

The administration of U.S. President Joe Biden has strengthened Cold War measures from longer than 40 years ago. In its new rivalry, the U.S. aims to freeze China’s advancement on a new front: chip technology that is critical for economic development and military superiority.

#NewArticle: Biden Administration’s escalation of the #chipwar with #China is expected to at once hamper China’s foundry industry and cost multinational #chipmakers billions of dollars in lost sales.
➡️ Read now: https://t.co/KxRPZ0CXaz

Wired said Washington’s “sweeping new controls are designed to keep [China’s] AI industry stuck in the dark ages while the U.S. and other Western countries advance.”

The tech magazine quoted Gregory Allen, director of the AI governance project at the Center for Strategic & International Studies (CSIS), an influential neoconservative think tank in DC that is bankrolled by the weapons industry, U.S. government, and Washington’s allies.

Allen summed it up:

The United States is saying to China, ‘AI technology is the future; we and our allies are going there—and you can’t come.’