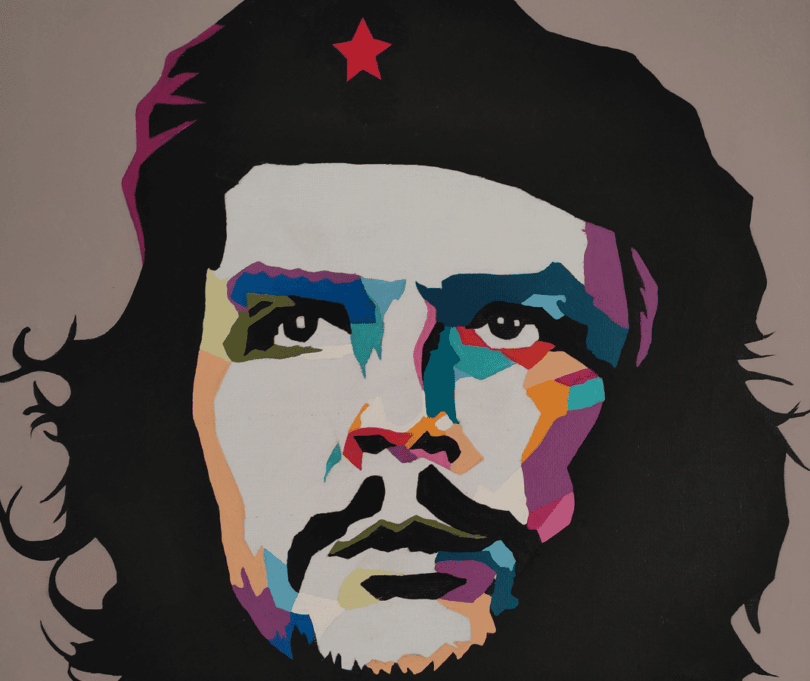 Commodification of the iconic image of Ernesto ‘Che’ Guevara has failed to dim the revolutionary light that burned on after his CIA assassination on 9 October 1967. Heralded worldwide by liberation fighters, activists and working classes as the heroic guerrilla of the Cuban revolution, a leader of its first socialist government and a relentless Marxist thinker, Che became a central figure of leftist culture in Latin America and beyond. Embedding his principles of duty and aspiration to fight for the future, school children under Cuban socialism pledge daily, “Pioneers for Communism, we will be like Che.” In Hasta Siempre, Commandante, Cuban songwriter Carlos Puebla (1917-89) prophesied:

Your revolutionary love is taking you to new places,

where they await the strength of your arms in liberation.1

These words would be sung and translated worldwide, while musicians pledging to carry Che’s torch wrote their own songs to his life, death and the struggles he would inspire in future. From Havana to Santiago, Cairo to Bethlehem, singing about Che Guevara has unsettled elites, ruffled bourgeois feathers and kindled the flame of revolutionary tradition.

Written by Puebla in 1965, as Che parted Cuba to take part in revolutionary movements in Africa and Latin America, Hasta Siempre was, according to its author, “a song of farewell, not death,” and musical representation of Che’s relationship to Fidel Castro. Reading out Che’s parting letter to the Cuban people at the Chaplin Theatre in Havana, Fidel delivered the words written months earlier with characteristic poeticism:

I carry to new battlefronts the faith that you taught me, the revolutionary spirit of my people, the feeling of fulfilling the most sacred of duties: to fight against imperialism wherever it may be.2

The audience was in raptures and Puebla, once a target of the pre-revolution Batista regime,3 was moved to pick up his guitar: “On the unforgettable night when Fidel read out Che’s farewell letter—that same night I wrote the song, Hasta Siempre, Comandante.”4

Over the years Hasta Siempre would be emblematic of a society building from the ashes of colonial exploitation and imperialist domination, and came to be sung by Cubans at revolutionary mobilizations, concerts, social occasions, and even at international sporting events. The simplicity of its bolero composition and clarity of identification with the revolutionary movement made Hasta Siempre a grassroots hit with many outside the country. In the Costa-Gavras film State of Siege (1972), Uruguayan police hunting Tupamaros guerrillas fail to silence student loudspeakers while the song blares out proudly during a demonstration. Dozens of cover versions span Buena Vista Social Club, jazz versions by Charlie Haden and Robert Wyatt, French leftist band Zebda and Venezuelan vocalist Soledad Bravo. A pop version recorded by Nathalie Cardone hit number 2 in the mainstream French charts in 1997, helping her to sell over 750,000 albums in the country alone.

Hasta Siempre would not be the only song Carlos Puebla would dedicate to Che. In Lo Eterno, the singer ascends the martyred guerrilla into immortality:

How you were more than a man

A light and example

You will live forever

In the heart of the people.

To Žižek, the words of Puebla wrap Che in Christian mythology, as a “sacred figure where the “normal” criteria of actual achievements no longer matter”. Distanced from Cuban socialism, which Žižek virulently opposes,5 Che “had to die a miserable death in order to become the cult figure that he is.”6 Yet those who embraced Che in life and death did so with awareness of the “actual achievements” that his journey of sacrifice and commitment enabled, not least in Cuba. Recorded in 1968, Silvio Rodríguez’ Fusil Contra Fusil (Rifle Against Rifle) predicted that, “All of the Third World will tell of his pain,” through the armed, anti-colonial struggle, with Che’s name collectivized for humanity.

That this process had begun before Che’s martyrdom was evident in 1967’s El Aparecido (The Apparition), as Chilean songwriter Victor Jara (1932-73) captured the relentlessness of a CIA-led manhunt for Che while he remained free among the socialist fighters in the Bolivian mountains. The song, which encapsulated renewed pride in indigenous instruments by Latin American progressives, features a breathless chorus of “córrele, córrele, córrela,” or “run, run, run,” while the overwhelming odds of Che’s mission are starkly put:

Over his head circle,

ravens with talons of gold

How he has been crucified

by the fury of the powerful.

he is pursued by battalions.

Because he offers life

they want his death.7

In a sign of how Che’s position would divide revolutionaries from social democrats, the song led Jara into criticism from the Chilean Communist Party, angered by emphasis on armed struggle over what it saw as the democratic road to socialism. Decades on from his own torture and murder at the hands of the Pinochet coup, Jara’s works remain popular.

With comparable status to Jara in another key region of anti-imperialist struggle, Egyptian resistance singer Sheikh Imam (1918-1995) was frequently pictured wearing Che Guevara insignia while he played oud and sang an intensely political repertoire. With lyricist Ahmed Fu’ad Negm (1929-2013), Imam offered stinging critiques of a supposedly postcolonial society. Coming both in the wake of Che’s murder and of the June 1967 defeat of Nasser’s Arab alliance by Zionist colonization, their song Gifara Mat (Guevara’s Dead) was dirge-like:

Guevara died, Guevara’s dead, on the radio that’s what they said.

On the street that’s all the news, and in the mosques and in the pews.8

The Imam-Negm alliance upset the balance for those apparently committed to keeping radical politics out of Egyptian music. Among these, composer Sayyed Mikkawi hit out at Imam’s stated commitment to “the path of revolution” as an “artist of the people,” asking whether the embrace of Guevara meant that Egypt had “abandoned its own heroes.”9 Sheikh Imam had attacked the bourgeois pageantry of Mikkawi’s socialite existence and famously lived an austere life among the working class.

Sheikh Imam would be a direct influence on a new generation of Egyptian musical revolutionaries and appeared regularly in the 1980s household of a young Hazem Shaheen,10 later to become a leading oud virtuoso and songwriter. During the period of struggle against the Mubarak dictatorship, Shaheen’s Iskanderella group took on Guevarist symbolism; Sheikh Imam covers were central to their development. They would sing Nagm’s lyrics a half-century after their composition:

So my dear slaves, here is the lesson. Guevara’s cry is always the same and your choices are but one.

There’s nothing for you to do, but to declaim, prepare for war or be done.

With the reemergence of the Palestinian revolution after 1967, many children in refugee camps in Lebanon and Gaza were adorned with the Arabized name “Gifara,” alongside other names referencing steadfastness and liberation. Speaking to Lena Meari, a former PFLP leader remembered that, “We were fascinated with the Guevarian path and it affected our thinking.”11 Palestinians would sing for Che too. Among the Palestinian songs to Che included re-writing of national liberation anthems like Bektob Ismik Ya Biladi (I Write Your Name, My Country), with melodies set to new lyrics on Che and sung by communists in Bethlehem, and vocalist Amal Murkus’ Thawri ka-Che Guevara (Revolutionary, As Che Guevara), based on Puebla’s Hasta Siempre.

with a red rose

Its body will become yours, Guevara

and make a revolution.

Following the mass uprising across Palestine in May 2021, the figure of Che appeared in Sawtoka Ya Shaabi (Your Voice, My People), a Palestinianized arrangement of Italian workers’ anthem Bella Ciao, by Palestinian artist Sanaa Moussa. In the song, the cry of patria o muerte, or “homeland or death,” appears between verses of My People Are Alive, by Palestinian poet Samih al-Qasim.

Che was a constant presence in the performing activism of Turkish revolutionary band Grup Yorum, whose vocalists sang Puebla’s Hasta Siempre with both Spanish and Turkish poetry. Before the banning of the group’s performances in 2016 and imprisonment of its members by the Erdoğan government, the musicians played concerts to tens of thousands of mostly leftist supporters. Among those who had sung for Che, leading members Helin Bölek and Ibrahim Gökçek were martyred in death fasts in April and May 2020 respectively. Intensifying repression for their commitment to socialist politics, the prosecution of Grup Yorum had been accompanied by right wing commentators suggesting that their fans’ wearing of Che Guevara-inspired clothing was proof of the musicians’ support for “terrorism.”

In the flash points of struggle against oppression and exploitation, Che remains present. Both a tenacious, enduring voice for the oppressed, and a reminder of the depths to which imperialism and reaction will sink to silence it. As in the songs and music of bygone and living revolutions, singing brings people together in common melody in the fight for a new future. Che once wrote,

The basic clay of our work is the youth; we place our hope in it and prepare it to take the banner from our hands.13