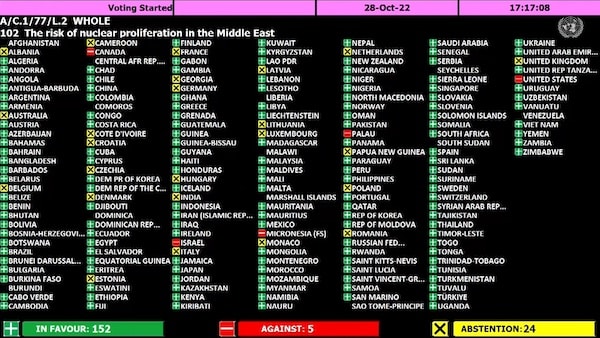 The October 28, 2022 UN General Assembly vote telling Israel to get rid of its illegal nuclear weapons.

The vast majority of countries on Earth voted in the United Nations General Assembly to condemn the Israeli apartheid regime for having nuclear weapons, in flagrant violation of international law.

Israel is the only country in West Asia that has nukes. Tel Aviv has not officially acknowledged its possession of the planet-destroying weapons, but experts estimate it has at least 90 nuclear warheads, and perhaps hundreds. 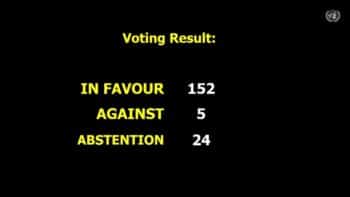 The October 28, 2022 UN General Assembly vote telling Israel to get rid of its illegal nuclear weapons.

On October 28, a staggering 152 countries (79% of all UN member states) adopted a resolution that called on Israel to give up its atomic bombs, join the Non-Proliferation Treaty, and allow the International Atomic Energy Agency (IAEA) to supervise its nuclear facilities.

Just five countries voted against the measure: the United States and Canada, the small island nations of Palau and Micronesia, and apartheid Israel itself.

Another 24 countries abstained, mostly members of the European Union, NATO allies, and India.

The resolution, document A/C.1/77/L.2, was titled “The risk of nuclear proliferation in the Middle East.”

It demands that Israel abide by the Treaty on the Non-Proliferation of Nuclear Weapons (NPT) and put “all its nuclear facilities under comprehensive International Atomic Energy Agency safeguards.”

The document likewise says Israel must commit “not to develop, produce, test or otherwise acquire nuclear weapons, to renounce possession of nuclear weapons and to place all its unsafeguarded nuclear facilities under fullscope Agency safeguards as an important confidence-building measure among all States of the region and as a step towards enhancing peace and security.”

It was adopted in the 25th plenary meeting of the UN General Assembly’s First Committee, which is focused on disarmament and international security.

Back in 2019, the United States and apartheid Israel were the only countries on Earth that voted against UN General Assembly draft resolutions calling for establishing a nuclear weapons-free Middle East, preventing an arms race in outer space, and ending Washington’s illegal six-decade blockade of Cuba.

Important breakthroughs have arrived at the UN seeking to prevent an arms race in outer space and create a nuclear weapons-free Middle East. There are just two main obstacles: the US and #Israel.@WomenMarch4Paz @Blacks4Peacehttps://t.co/BZbNaauNPn