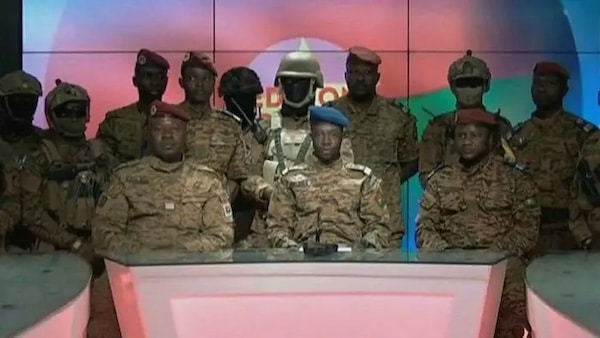 The landlocked country of Burkina Faso has proven itself to be a valuable diplomatic and intelligence asset in the U.S. domination of the African continent. Over the last ten years, the U.S.-run Africa Command (AFRICOM) has built up the nation’s military capacity to assist U.S. regional operations.

On September 30, 2022, yet another military coup toppled the government of Burkina Faso, with protesters surrounding and vandalizing the French embassy in the capital of Ouagadougou. The demonstrators’ anger centered on the French, and behind them, their American allies, for their failure to stop a ceaseless wave of Islamist militant attacks around the country.

Both countries had dispatched military personnel to train Burkina Faso’s army, but the extremist attacks continued to escalate. The Islamist onslaught began in the country in 2016 as a result of the U.S.-led NATO regime change war against Libya, which ultimately destabilized the neighboring country of Mali, enabling the Al Qaeda-allied Boko Haram to seize slices of territory with weapons looted from Libya’s military depots.

In Burkina Faso, Western media has homed in on a small number of protestors waving Russian flags in the streets following the coup, suggesting Moscow may be to blame for toppling the government. The putsch has led to the swearing in of Capt. Ibrahim Traoré as President; or Interim President, depending on which report you read. But, as we shall see, it is the West that has the longest history of interfering in the country.

Over the last decade, Burkina Faso, which lies in West Africa and is surrounded by strategically-important countries, has endured multiple coups. Many of the military men deposing civilian governments, and indeed each other, have been trained by the Pentagon. But why does Washington wish to dominate such a small country?

In the late-1880s, the French fought for control over parts of the Wassoulou Empire, including landlocked territory which they later renamed the Republic of Upper Volta. During the 1950s, the U.S. Central Intelligence Agency monitored French geological explorations, noting large deposits of copper, gold, and manganese.

After independence from France in 1960, the state was called the Voltaic Democratic Union.President Maurice Yaméogo accused the French Army of training his opponents. The CIA’s ears pricked up when Army Chief of Staff Sangoulé Lamizana seized power in 1966 to crush a general strike triggered by Yaméogo’s public spending cuts. The CIA said:

Upper Volta’s pro-Western orientation probably will not be affected.

By the early-‘70s, Lamizana was still in power and had received funds from the USA. The hearts of the Nixon administration bled for the visually impaired people of the country:

river blindness… is endemic … As a result, large tracts of fertile land in the savannah area … cannot be opened to development.

In 1980, Colonel Saye Zerbo seized power. Described as a “moderate” by the CIA, he was overthrown two years later by Dr. Jean-Baptiste Ouédraogo, about whom the CIA made little comment.

In 1983, Captain Thomas Sankara, dubbed “Africa’s Che Guevara” by his supporters, took power. He imposed a program of mass education, women’s rights, localism, and infrastructure development. He renamed the country Burkina Faso, or Land of True Men. But Sankara retained economic ties to Paris. The CIA feared that Sankara was too weak to stop what they called “the extreme left” from gaining power and allying with the Soviet Union.

Sankara was overthrown and murdered in 1987. Blaise Compaoré, the former friend and alleged French and U.S. intelligence asset who betrayed and killed him, took over and ruled until 2014.

The CIA’s record dries up from this point. In 1995, the New York Times articulated Washington’s interest in Burkina Faso, portraying Compaoré as a prolific diplomatic middleman who had “turned his landlocked country … into an unlikely diplomatic powerhouse,” hosting exiled Algerian Islamists on behalf of France and mediating the opposing sides in Togo’s civil war.

In 2012, U.S. Special Operations Forces reportedly set up small bases in Burkina Faso, designed to support reconnaissance flights and so-called counterterrorism operations against Islamists operating in neighboring countries and regions, such as Mali, Mauritania, and the Sahara. Codenamed Creek Sand, the operations are a boon for U.S. mercenaries, like Derek Stansberry, who in 2010 was caught with dynamite and found not guilty. The regional information feeds into a fusion center, known as Aztec Archer.

Following protests, President Compaoré finally resigned in 2014. At the time, the military seized power under Lt. Col. Isaac Zida, former deputy commander of the Presidential guard. Zida had been trained at MacDill Air Force Base, Florida, as part of courses run by the Pentagon’s Joint Special Operations University. In 2015, chief of intelligence, General Gilbert Diendéré, who had been trained by the U.S. under Flintlock as part of its so-called war on terror, led an ultimately failed coup.

Burkina Faso began to experience a wave of attacks by Islamist militants a year later. The extremist infiltration was a ricochet effect of U.S. and NATO interventionism in the region. As Stephanie Savell, co-director of Brown University’s Cost of War Project, acknowledged,

The violence [in Burkina Faso] spilled over from neighboring Mali in the wake of the 2011 U.S.- and NATO-backed revolution in Libya that toppled longtime Libyan dictator Muammar al-Qaddafi and contributed to the 2012 political destabilization of Mali.

In 2019, the DC National Guard trained the country’s Armed Forces. Agents from Alcohol, Tobacco, Firearms and Explosives, the Drug Enforcement Agency, FBI, Marshals, and Secret Service contributed to the training.

Defense Post claims the program’s the aim was “to help stabilize the security situation in a fragile democracy.” But it was clear the U.S. military’s was at least as motivated by great power competition with Russia and China. As National Guard Bureau Division Chief for International Affairs, Col. Craig Hummer told Defense Post:

As this constellation grows, it will allow for us, the United States, to expand our competitive space on the continent.

In 2020, the U.S. Embassy confirmed in a fact sheet entitled “Expanded U.S. Engagement in Burkina Faso” that “over 3,000 Burkinabe soldiers and gendarmes are direct recipients of U.S. training and equipment programs each year, including peacekeeping training.”

Over the years, the Muslim-majority country of Burkina Faso has endured hundreds of terror attacks, which were blamed on offshoots of al-Qaeda and ISIS. Parts of the population protested against the government’s perceived failure to end the attacks. The demonstrations took place in the capital, Ouagadougou, which happens to be where the bulk of secret U.S. operations are based.

The BBC, by contrast, spun the situation as follows: From the U.S., Damiba “received instruction on the law of armed conflict, and respect for human rights.” Among many things omitted by the BBC is that, around that time, many Burkinabé turned against the neo-colonial presence of the French, whose Embassy hosted the very military officials that, together with the U.S., had kept the nation militarized.

But Damiba did not last long. In September this year, he was overthrown by Captain Ibrahim Traoré, who said that Damiba had proven impotent to stop the Islamist attacks.

Did the Pentagon train Traoré as well?

“This is something we will have to research and get back to you,” the Pentagon said in response to a query by Nick Turse.

As for the Russian flags flying in the capital of Burkina Faso, the U.S. government’s Voice of America broadcasting service found they were handmade by a local vendor, and were being flown by Burkinabé in an appeal for Russian intervention. Indeed, Russian military assets were not present in the country—at least, not yet.

According to VOA, the pro-Russian Burkinabé had been consuming media from Mali, where Russia’s Wagner Group was presently battling Islamist militants at the invitation of Bamako. They believed the private militia had proven successful next door, and now wanted them to replace the French special forces that had failed so miserably after seven years in their country.

Russia will do more harm than good in finding a long term solution to Burkina Faso’s security problems.