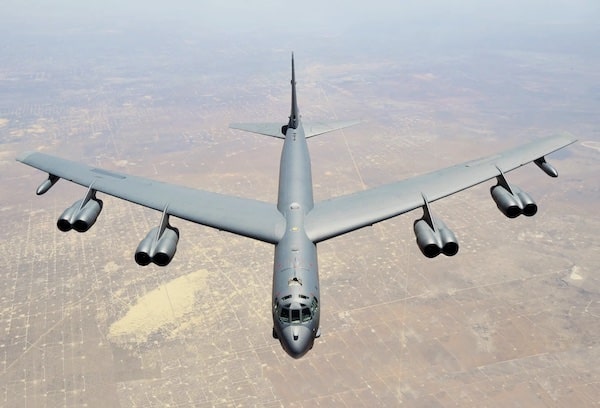 The revelation by ABC’s Four Corners program on 31 October that the U.S. Air Force will base six B-52 bombers in the Northern Territory is the latest signal that the United States is preparing for war with China and confirms Australia’s bipartisan commitment to these murderous plans.

The Pentagon will deploy the B-52s to the Tindal air base near Katherine. U.S. bombers have previously conducted exercises with Australian forces in the NT, but this will be the first time that they have been based in the Territory, most likely for six months at a time during the dry season, when Australia, the U.S. and other allies undertake extensive war games involving thousands of troops.

Along with rotating the bombers through Tindal, the U.S. reportedly will spend tens of millions of dollars on the base, building an aircraft parking apron, a squadron operations facility and a maintenance centre to support them.

B-52 bombers are designed for one purpose—long-range missions to drop conventional or nuclear weapons.

Australia may be far from the U.S. Air Force’s target—China—but that is why the bombers will be stationed here. China’s growing military capacity is rendering the U.S.’s biggest military bases in the region—Okinawa and Guam—vulnerable to Chinese missile attacks. Northern Australia, by contrast, is out of reach from all but China’s intercontinental ballistic missiles, but close enough for B-52s to bomb China and return to base in a single sortie. The U.S. Air Force confirmed the Four Corners report, stating,

The ability to deploy USAF bombers to Australia sends a strong message to adversaries about our ability to project lethal firepower.

The decision to host B-52 bombers represents a significant step-up in Australian integration in U.S. war planning. It was made without any parliamentary vote or public scrutiny and came to light only when Four Corners found out about it in U.S. tender documents. Even when questioned about the revelations the day after they were screened, Prime Minister Anthony Albanese refused to discuss it, saying only:

We engage with our friends in the U.S. alliance from time to time. There are visits to Australia, including in Darwin, that has U.S. marines on a rotating basis stationed there.

In line with U.S. conventions regarding U.S. Navy submarines visiting Australian ports, the U.S. will not inform the Australian public if the bombers are nuclear-armed. So much for the democracy that the U.S. and allies like Australia say they are defending.

The upgrading of Tindal is part of a larger U.S. military footprint in the Territory. Starting under the Obama administration, the U.S. has rotated marines through Darwin, initially around 250 each year, but growing to 2,000 in what is a U.S. base in all but name. The U.S. will spend $1 billion on building eleven enormous fuel storage tanks and an ammunition bunker in Darwin, enabling the U.S. to use northern Australia as a platform to wage war without relying on Guam or Pearl Harbour in Hawaii. This will increase the deployment of U.S. military personnel in the Territory.

Four Corners also reported on the significant expansion of the secretive spy station Pine Gap, jointly managed by U.S. and Australian intelligence agencies and situated 25 kilometres outside Alice Springs. Pine Gap is the US’ most potent foreign intelligence-gathering facility. It can listen in on communications anywhere in the vast expanse from the Middle East and Africa to the Indian Ocean, Asia and the Pacific (and on domestic targets in Australia itself). The information is transmitted directly to U.S. regional military commands and the Pentagon, enabling the U.S. to launch and sustain wars.

These moves fit into a broader picture of hawkish U.S. military posturing. In the Biden administration’s recent National Defense Strategy and National Security Strategy, the White House defines the 2020s as a “decisive decade” of “geopolitical conflict between the major powers”. The U.S. identifies China as its primary adversary as it is “the only competitor with both the intent to reshape the international order and, increasingly, the economic, diplomatic and technological power to do so”.

The U.S. regards Australia, along with Japan and South Korea, as its most important allies in the Indo-Pacific. Australia is the southern anchor of the Pentagon’s war gaming, a launch pad for the U.S. Air Force and Navy and a base from which to blockade Chinese merchant shipping in the event of open hostilities. Australia is now thoroughly integrated into U.S. war planning through the AUKUS partnership and the Quadrilateral Security Dialogue.

This has nothing to do with safeguarding peace in the Indo-Pacific—the rationale provided by the generals, politicians and foreign policy think tanks. By agreeing to cooperate with U.S. efforts to maintain its domination of the Indo-Pacific, Australia is trying to prop up a status quo that has been hell for many in the region.

The U.S. has waged murderous wars, most notoriously in Indochina in the 1960s and 1970s, which have resulted in millions of deaths. It has supported dictators and repressive regimes, from Suharto in Indonesia and Marcos in the Philippines to the generals in Thailand today. The U.S. retains the world’s most powerful nuclear weapons stockpile and is the only country to use them in wartime. And its “rules-based order” works primarily for the benefit of U.S. multinational companies and U.S. banks to exploit trade and investment opportunities in the region (although, frustratingly for the U.S., China has itself taken advantage of this “order” in the past two decades).

Australia has been the loyal lieutenant and fellow belligerent in much of this, not because it is simply an American puppet, but because the Australian ruling class regards a strong U.S. as a prerequisite for its own regional ambitions and profiteering.

Australia’s decision to provide the U.S. with basing facilities not only heightens the risk of a terrifying war that could cost the lives of millions of people in the Indo-Pacific but also makes Australia itself a target. China has already made clear that it regards any nation directly participating in an attack on China or providing facilities to enable such an attack as a hostile power. The most likely flashpoint is Taiwan, which Chinese leader Xi Jinping has vowed to “reunite” with the Chinese mainland. Some hawkish think tanks believe a clash between the U.S. and China over Taiwan might occur as early as 2025.

The drive to war in the Indo-Pacific must be halted or catastrophe will result.

Tom Bramble is co-author, with Mick Armstrong, of the book ‘The Fight for Workers’ Power: Revolution and Counter-Revolution in the 20th Century‘, published by Interventions.