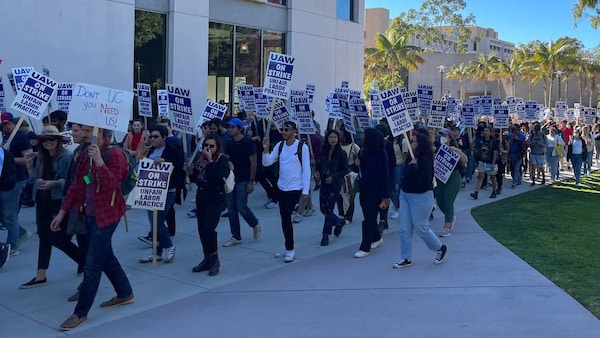 On November 14, 48,000 academic workers at the University of California began the largest higher education strike in U.S. history. Workers are picketing at all ten University of California campuses across the state. Workers voted to go on strike after months-long collective bargaining with the UC system. Their central demands are: fair compensation, support for working parents, environmentally sustainable commuting, job security, disability justice, and international academic worker rights.

For the last several months, workers, organized with UAW (United Auto Workers), have been engaged in collective bargaining with the University of California system. During these negotiations, workers have proposed higher wages, more rights for working parents, and fully funded public transit for workers, among other things. According to UC workers, their proposals have been ignored and the university’s proposals are inadequate. For example, the UC system’s proposed wage increases of 3-4% constitutes a pay cut in the context of 8.5% inflation.

Desmond Fonseca, academic worker with the PhD program at University of California, Los Angeles, spoke to Peoples Dispatch from the picket line. “Our participation is historic, our numbers are historic, our demands are historic,” said Fonseca.

We see ourselves in the frontline of the transformation of academic work across the country, where for decades, academic workers such as ourselves, teaching assistants, student researchers, postdocs, have basically served as exploited laborers to generate profit for the University.

Over the past four or five decades, universities across the country, and especially the University of California, have ceased to be truly public institutions, and have turned themselves into a corporation, for greed, for exploitation, and ultimately for the elite administrators who think that they run this university. So we’re here, statewide, 48,000 strong, showing that it is us that run this university.

The union also claims that the UC system has broken the law by announcing and implementing changes outside of the bargaining process and refusing to provide necessary information, among other things. As a result, from October 26 and November 2, workers cast their ballots and voted to authorize a strike, with 98% voting yes.

In this way, the union seeks to end rent burdening which is when workers are forced to use 30% or over of their income towards rent. The union conducted surveys which found that 92% of graduate workers and 61% of postdoc students are rent burdened, and 40% of graduate workers spend over half their income on rent. UAW-organized UC workers point out that the housing that the UC system provides is limited and sometimes more expensive than the private market.

The workers are also demanding support for working parents, in particular for working women, who take on the bulk of childcare responsibilities. Fair UC Now, UC academic workers organized under a coalition of UAW unions, interviewed UC workers about their experiences with childcare. “Raising a family on a postdoc salary is nearly impossible,” said UCLA worker Anne Le Goff.

Workers are demanding $2,000 in childcare reimbursements, subsidies for UC-affiliated childcare programs, healthcare for dependents, and more paid leave for families. The union hopes that these policies will reduce the amount in which primary caregivers, most of whom are women, are pushed out of academia.

The vast majority of workers in the U.S. are not organized in unions, with 37.6% unionized in the public sector and only 7% unionized in the private sector. Those numbers are the result of a long, steep decline in unionization—in the mid-twentieth century, around a third of U.S. workers were unionized. Union membership peaked in 1954 at around 35% of workers unionized.

Today, around 71% of nonfarm payroll employees are employed in the service sector, which due to structural factors like the lack of the factory floor and the perceived change in relations of production, does not have the same rich history of labor organizing as the manufacturing sector.

Nevertheless, U.S. workers have recently made history organizing the historically unorganized working class. Workers at tech giant Google launched the Alphabet Workers Union in January 2021. Graduate student workers at Columbia, also organized with UAW, won a contract deal after thousands went on strike in November of 2021. The Amazon Labor Union unionized the first U.S. Amazon warehouse in April of this year. Workers at Starbucks locations across the country continue to unionize stores, and organize the notoriously challenging food service sector.