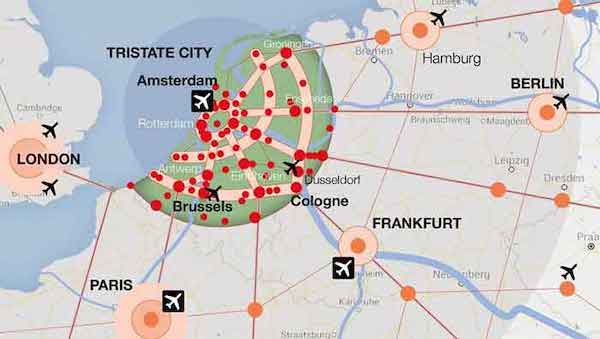 Disaster capitalism and crisis narratives are currently being used to manipulate popular sentiment and push through a set of unpalatable policies that would otherwise lack sufficient political support.

These policies are being promoted by wealthy interests that stand to make billions of dollars from what is being proposed. They seek to gain full control of food and how it is produced. Their vision is tied to a wider agenda aimed at shaping how humanity lives, thinks and acts.

Throughout much of 2022, protests by Dutch farmers have grabbed the headlines. Plans to reduce the Netherlands’ nitrogen output by half come 2030 have led to mass protests. The government talks of the need to move away from animal-based agriculture and its climate-impacting emissions.

This ‘food transition’ often goes hand-in-hand with the promotion of ‘precision’ agriculture, genetic engineering, fewer farmers and farms and lab-made synthetic food. This transition is sold under the banner of ‘climate-friendly’ and piggy backs on the ‘climate emergency’ narrative.

Campaigner Willem Engel claims the Dutch government is not seeking to eliminate farmers from the landscape for environmental reasons. Instead, it is about the construction of Tristate City, a megalopolis with a population of around 45 million extending to areas of Germany and Belgium.

Engel suggests the ‘nitrogen crisis’ is being manipulated to drive through policies that will result in reshaping the country’s landscape. He argues that the main nitrogen emitter in the Netherlands is not agriculture but industry. However, land currently occupied by farms is strategically important to industry and housing.

The tristate concept is based on a giant unified ‘green’ urban region linked by ‘smart’ technologies that can economically compete with the massive metropolises we see in Asia, especially in China.

The Dutch government recently announced plans to buy out up to 3,000 farms in a bid to comply with controversial targets to reduce run-off from synthetic nitrogen fertilisers. Dutch nitrogen minister Christianne van der Wal says farmers are to be offered more than 100 per cent of the value of their farms. But there are plans to enforce buyouts in 2023 if voluntary measures fail.

Is what we see happening in the Netherlands the initial step in trying to get the public to accept GM crops, lab-engineered ‘food’ and 90 per cent of humanity being crammed into mega-cities?

And is it just a coincidence that the following ecomodernist vision of the future appears in Dutch on the Netherlands-based RePlanet.nl?

It says that by 2100, there will be ten billion people on the planet:

More than 90 per cent of these live and work in the city, compared to 50 per cent in 2000. Around the city are large farms full of genetically modified crops that achieve four times as high a yield as at the beginning of the 21st century.

It also states that beyond the farmland begins nature, which now occupies most of the surface of our planet. Whereas in 2000 half of the earth’s surface was still in use by humans, by 2100 it is only a quarter. The rest has been returned to nature, biodiversity and CO2 emissions are back to pre-1850 levels and hardly anyone is in extreme poverty anymore.

So, there you have it. Drive farmers out of farming, grab their land for urbanisation and rewilding, and we will all live happily ever after on genetically engineered crops and synthetic food created in giant vats. In this techno make belief land, no one is poor, and everyone is fed.

A technocratic vision where the stranglehold of the current food conglomerates remains intact and is further entrenched, and politics is reduced to decisions about how best to tweak the system for optimal gains (profit).

We will be reduced to little more than serfdom as a handful of digitally enabled megacorporations control everything. Bayer, Corteva, Syngenta, Cargill and the like will work with Microsoft, Google and the big-tech giants to facilitate AI-driven farmerless farms and e-commerce retail dominated by the likes of Amazon and Walmart. A cartel of data owners, proprietary input suppliers and retail concerns at the commanding heights of the economy, peddling toxic industrial (fake) food.

And what of elected representatives (if they still exist in this dystopian vision)? Their role will be highly limited to technocratic overseers of these platforms.

This is where the interlocking hegemonic class steered by the likes of the Gates Foundation, Big (Agri)Tech, Big (digital) Finance, Big Pharma and ‘environmentalists’ like journalist George Monbiot who peddle this vision want to take us.

And they will tell you this is for your own good—to avoid hunger and starvation and to ensure wildlife is protected, the planet is ‘saved’, zoonotic pandemics are avoided or that some other doomsday scenario is dodged.

The current food system is in crisis. But many of its problems were brought on by the same corporate interests who are behind what is outlined above. They are responsible for an inherently unjust food regime driven by World Bank, WTO and IMF policies which act on their behalf.

These corporations are responsible for soil degradation, synthetic fertiliser run offs into waterways, the displacement of rural populations and land appropriation, the flight to over-populated cities and proletarianization (former independent producers reduced to wage labour/unemployment), the massive decline in bird and insect numbers, less diverse diets, a spiralling public health crisis due to chemical-intensive farming and so on.

And yet, despite the massive problems caused by this model of agriculture, it is an inconvenient truth that the (low input/low-energy) peasant food web—not industrial agriculture—still feeds most of the world even though the industrial model sucks up huge amounts of subsidies and resources.

Those who promote the ecomodernist vision are using genuine concerns about the environment to push through an agenda. But where does genuine environmentalism begin?

It does not begin with bought democracy (see the article How big business gets control over our food) or state coercion (see WikiLeaks: U.S. targets EU over GM crops) to get GM crops and food onto the market.

It does not start with ‘precision’ agriculture in which gene-editing and the like is akin to using a blunt ax and constituting genome vandalism (according to Harvard professor George Church).

And it does not begin and end with genetically engineered crops that have failed to deliver on their promises and chemically doused plants to be used as ‘feed’ for energy-consuming vats that engineer matter into food.

Nor does it begin and end with the World Bank/IMF using debt (see the article Modi’s Farm Produce Act Was Authored Thirty Years Ago) to enforce dependency, displace populations, crowd people into densely packed high-rises and strip humanity of its inherent connection to the land.

Many of the problems mentioned above could be overcome in the long term by prioritising food and seed sovereignty, localised production and local economies and agroecological farming. But this is of no interest to Bayer, Microsoft, Cargill and the like because none of that fits their business model—indeed, it poses an existential threat.

Rather than forcing farmers out of farming, the Dutch government could encourage them to farm differently.

But that requires a different mindset from that which depicts farmers and farming as a problem in order to ram through an agenda based on a fairy tale techno utopian vision of the future.

The globalised system of food production based on an industrialised, high-input, chemical-dependent and corporate dependent model underpinned by geopolitical interests is the real problem.

We need to push aside the vested interests blocking the transformation with the baseless arguments of “the world needs more food” and design and implement policies that are forward-looking… We have all the needed scientific and practical evidence that the agroecological approaches to food and nutrition security work successfully.

These policies would facilitate localised, democratic food systems and a concept of food sovereignty, based on optimal self-sufficiency, agroecological principles, the right to culturally appropriate food and local (communal) ownership and stewardship of common resources, not least land, water, soil and seeds.

Because when discussing food and agriculture, that’s where genuine environmentalism starts.

The author is a research associate with the Centre for Research on Globalization. His e-book Food, Dependency and Dispossession: Resisting the New World Order can be read for free here