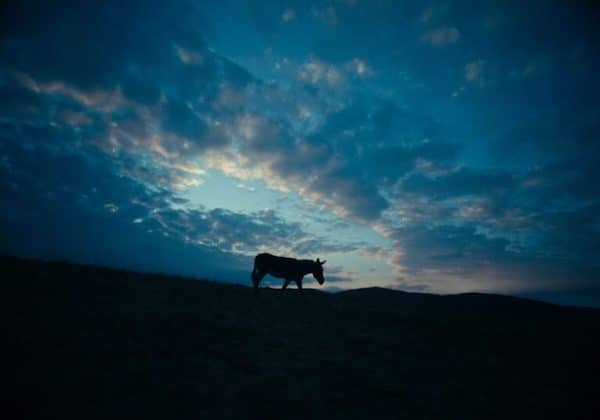 Once upon a time Dostoevsky wrote a passage in The Idiot (1868) about an abused donkey passed from owner to owner which inspired Robert Bresson’s classic 1966 film Au Hasard Balthazar.

Polish film director Jerzy Skolimowski, 56 at the time, watched the Bresson film and it became the first, last and only movie that ever made him cry.

Now, at age 84, Skolimowski and his co-writer and wife Ewa Piaskowska give the world EO, a partial homage to Au Hasard Balthazar and the most broad-based attack on speciesism in a feature film. EO is making plenty of audiences cry.

The title character EO is a small gray big-eyed Sardinian donkey (played by six different donkeys) who begins the film in a Polish circus and ends up in Italy. Animal protection legislation puts the circus out of business and splits up EO and his beloved human co-performer Magda which starts a worse series of events as no humans will take responsibility for EO unless they can exploit him/her. (Right with the times we don’t know if EO is a he or a she, although with six donkeys that definitely qualifies as a “they.” I’m going to refer to EO as a female in this article.) This sweet beast of burden is always looking for a friend—a horse, a human, a junkyard dog—and is frequently used to facilitate the enslavement of other animals.

There are echoes of Koyaanisqatsi and White God (a girl and her dog) in EO(a girl and her donkey) and the sensibility is very much like Okja (a girl and her pig) and Gunda. Stylistically, though, EO is the anti-Gunda: Gunda’s black and white minimalistic, music-less, human-less barnyard is replaced by a pulsating soundtrack, a slew of villains seen and unseen, great distances across Europe, tunnels, forests, windmills and mountains. Striking images of EO on a hillside at sunset, lost in a forest at night and standing on a small arched bridge in front of an enormous dam/waterfall and looking into the maelstrom will linger long after viewing.

When showing animal abuse on screen a director’s challenge is to keep people watching without overwhelming them. It’s a truism that many people are “too sensitive” to watch films of animal abuse but not sensitive enough to stop paying for the brutality, terror and injustice that goes into every piece of meat or a fur coat. Skolimowski skillfully navigates this by not showing most of the violence but simply showing the fear of the animals or letting us hear the violence. This will be a small comfort to many but I didn’t see anyone walk out of the movie.

After the circus folds EO is shipped to an equestrian center where a majestic white horse, tethered in an indoor riding ring, runs in circles with less freedom than a hamster on a wheel. EO accidentally knocks over a display case of equestrian trophies and is then shipped to a petting zoo where she’s ridden by special needs children. EO is visited one night by Magda who brings her a carrot muffin for her birthday. As Magda dances in the moonlight, thinking about the old days of the circus, we’re sure of EO’s love for her but Magda seems lacking as she obeys the commands of her jealous (of EO) boyfriend to leave and never sees EO again. The patriarchy is always seamlessly woven into speciesism. (See Green Paradise Lost by Elizabeth Dodson Gray or The Sexual Politics of Meat by Carol Adams.)

Seeking Magda and escaping the petting zoo, EO walks through a Jewish cemetery, reminding us that there are all kinds of holocausts although only someone like Isaac Bashevis Singer can get away with comparing them: “In their behavior toward creatures, all men were Nazis. The smugness with which man could do with other species as he pleased exemplified the most extreme racist theories, the principle that might makes right.” (Enemies, a Love Story.) And: “For animals, it is an eternal Treblinka.” (The Letter Writer.) For different but similar slaveries, see Marjorie Spiegel’s The Dreaded Comparison.

EO then enters a forest at night but she’s out of place. Beautiful immersive cinematography by Michal Dymek follows fast and furious: a close up of a web-spinning spider, a swimming frog, an owl treating EO as an intruder. There are foxes and, hair-raisingly, howling wolves. Will the wolves attack EO? No, actually, because Satan’s minions are here too: green lasers from rifles start flashing throughout the forest like a rave and hunters begin blowing away the wolves.

EO then comes upon a soccer match and is made an unwilling mascot by the winning team and later beaten with 2 by 4’s by the losing team. In a broken bloody heap, EO seems to be dreaming of a robot dog moving through the grass, techno progress contrasted with a deficit of ethical progress. The human gods will try their damndest to recreate something that moves and performs like a real animal (almost exclusively to repress other humans) but they won’t treat real animals with even rudimentary respect.

(The world’s richest man, Elon Musk, is currently torturing monkeys in his neuralink experiments. Fuck anyone who would attempt to “help” by torturing. George Bernard Shaw summed up Elon Musk a long time ago: “Any race of people who would use something as barbarous as animal experiments to ‘save’ themselves would be a race of people not worth saving.” EO stumbles into just about every setting of animal abuse except a vivisection lab.)

After an incredibly sure-footed and gripping 75 minutes or so the film loses its intensity with the introduction of many more humans, much more human dialogue, much less EO, a scene of random human violence at a truck stop and a countess (Isabelle Huppert) getting frisky with her priest stepson which seems like another movie altogether. Maybe with another viewing I’ll understand these puzzles. The strength of most of the film is that any dummy can get it.

I was expecting the film to do justice to EO’s character and struggles by building to a monumental emotional intimate denouement focused on EO’s last moments but, unlike Au Hasard Balthazar or Gunda, the movie pulls back emotionally, visually, artistically, politically.

A blurb after the film ends says no animals were harmed in the making of it. I’m against using animals in films but if directors are going to take advantage of its “legality”—and deliver pro-animal messages—they are able to simulate violence, suffering and death a la Alejandro Gonzalez Inarritu’s Amores perros.

(Some viewers will dispute that the film pulls back but your reviewer believes in seeing the captive bolt pistol, the futile attempts to escape the kill box, the expression in the eyes as the light and life goes out, the throat-slitting, the dismemberment and turning of innocent beings into blasphemous nothingness—and spiritual terms are correct because EO and Balthazar and all the other non-humans are being crucified every day. “Completely humble, completely holy,” said the great Bresson about his donkey Balthazar. That’s how a film would do justice to the life and character of EO—after all, the audience has come all this way, let them walk now–or explode their prejudices and reveal their complicity as they’re mortified in their seats. They should be bawling their eyes out. It’s a war—act like it.)

EO is the perfect guide through Skolimowski’s inferno but the film is not perfect. It is, however, the most comprehensive non-documentary attack on animal exploitation ever filmed. Despite its flaws, EO should be seen, applauded and promoted.

After a December 4 screening at the Laemmle Royal in Los Angeles, Skolimowski and Piaskowska discussed the film, saying it was “made out of love for animals and nature” and likening it to a “protest song.” The film does seem like the cry of an 84-year-old man sick to death of the cruelty in the world although he isn’t (yet?) vegan, or even a vegetarian, saying, “We reduced our meat consumption by two thirds and half of my crew stopped eating meat entirely.” And: “Do we really need to have bacon every morning?” No, my man, no more than we need to eat donkey every morning.