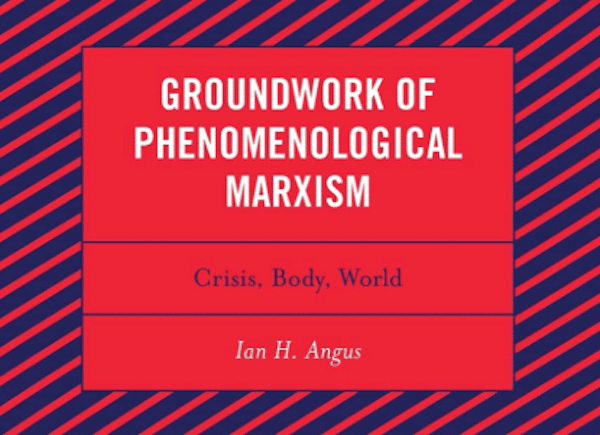 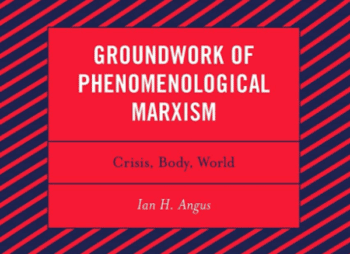 Ian H. Angus’ Groundwork of Phenomenological Marxism frames contemporary cultural and ecological crises as forms of an ongoing crisis of reason originating in the Renaissance, via an original synthesis of ‘arguably the central philosophical texts of the 19th and 20th centuries (8),’ Marx’s Capital Vol. 1 and Husserl’s Crisis of the European Sciences. Angus is foremost a phenomenologist and he aims to complete Husserl’s Crisis, left unfinished at the time of the author’s death, by taking seriously its philosophical task of recovering subjectivity in the face of unbridled objectivism and reversing the ‘emptying of meaning’ brought about by the quantification of both the human and non-human worlds. The book’s subtitle, Crisis, Body, World, indicates its scope—from individual corporeal subjectivity to the unspecifiably objective (and back again)—and the preface promises discussions of ‘themes relevant to indigeneity; Eurocentrism; ecology; technology, media theory and digital culture; the monopolization of the social representation of value by money; digital labour; the plurality of (what I call) culture-civilizations; etc.’ (ix).

Et cetera indeed. This is an ambitious and complexly structured book, with a seven-page-long detailed table of contents that divides chapters into sections, subsections and sub-subsections. The organization is not just a matter of housekeeping, however: as Angus explains in the first chapter, he is not only responding to Husserl’s Crisis but reproducing its logic. In the introductory Part I ‘Phenomenology and the Crisis of Modern Reason,’ the Crisis is summarized concisely and selectively to yield a sequence of three “innovations” which structure the remainder of the book, each to be explained, critiqued, and expanded upon in one of the three subsequent core parts, which are followed by a brief conclusion.

Part II takes up Husserl’s first innovation, the location of the origin of our contemporary crisis of reason in the mathematization of nature beginning in the Renaissance, a collective and ongoing effort. The trouble arises not from mathematics itself so much as the ontologization of mathematics: measurements and shapes cease to describe reality and are seen as what underlies reality, and thus more real than our shared, sensuous world (41). Following this shift, it is increasingly believed that nothing is real except what can be described mathematically, and subjective everyday experience is devalued in the dual sense of being made less valuable than scientific understanding, while also being emptied of so much that humans think of as ‘meaningful’ and ‘valuable’ in the least tractable but most familiar senses of such words. It is ‘the healing function of phenomenology’ (44) to make possible the restoration of meaning and value along with sensuous, qualitative experience by illuminating the origins and mechanisms of this emptying and reconnecting the world-as-thought-about with the world-as-experienced.

More precisely, the trouble arises from the formal abstraction characteristic of modern mathematics, an abstraction that moves directly from the realm of concrete objects to an unspecifiable ‘anything whatever’ representable by a variable like ‘x,’ which needn’t even represent an actual number but only ‘the mere possibility of numbering objects’ (74). This is distinct from generic abstraction, which moves stepwise from species to genus, allowing it to preserve something of the concrete and, crucially, making it in some sense reversible, to the extent that we can find a concrete instance corresponding to an abstract type. Angus examines the mathematical and philosophical foundations of this distinction in some detail and uses it as a connecting thread throughout the book. Among other things it grounds his critiques of Husserl and Marx, both of whom, in different ways, failed to appreciate the distinction. Hence Husserl, it is claimed, mistakenly thought he could work backwards purely philosophically from formal symbolic systems to concrete, individual objects. If Angus is right then the ‘tracing back to immediate experience’ that guides phenomenology is ineffective against the kind of formal abstraction that has led to the crisis of reason (97).

The curative must come from the outside of Husserlian philosophy, from Critical Theory and ultimately Marx’s own work. Angus turns to Marcuse’s One-Dimensional Man to make the shift from a mathematical analysis of formal reason to an examination of the socioeconomic forces propping it up (87), and Part I culminates in a painstakingly argued integration of Husserl’s conception of technique, which leads inward toward mathematical formalism and philosophy, and Marcuse’s, which leads outward towards technology and society. Goal-oriented technical activities are shown to be value-blind and oblivious to other activities oriented towards other goals. This too hinges on formal abstraction: ‘The emptying-out that treats a type as a formal “x” removes the technical end from any relationship to other ends as experienced in the lifeworld and theorizes it strictly formally, that is to say, without any consideration if such an end is valid, good, or just’ (101). The erasures caused by formal abstraction mean that values are not recoverable or representable within the realm of practical activity, and the result is a world that appears to its inhabitants as a disordered aggregate of goal-oriented activities working at cross-purposes, or no discernible purpose at all. Thus ‘what is needed is not a science with a new conceptual structure but a mode of thinking an acting that relates to the lifeworld as more than a simple aggregate of techniques’ (102). To the extent that any such mode must contend not just with ideas and ideals but with the relationships between these seemingly isolated techniques themselves, and attempt to resituate them within what Husserl calls the horizon of the lifeworld, it begins to take on the form of an ecology.

Marx of course found in capitalist society a very similar ‘unthematized aggregate’ of (formal, abstract) prices shaping and deforming human existence (138), and Marx’s work is taken up in greater detail in part III, ‘The Living Body and Ontology of Labor’ along with Husserl’s second innovation, the overcoming of the limits of Kantian (objectivist) transcendentalism with a science of the lifeworld made possible by the phenomenological reduction. Part III opens with a detailed examination of Marx’s early and later theories of labor, his discovery of abstract labor, and the ‘ontology of labor’ that issued from this discovery. Marx’s early writings yielded an ontology of labor as alienation that was appreciated and critiqued by the earliest post Husserlian phenomenologists, among them Jan Patočka and Lugwig Landgrebe, whom Angus follows in finding in it both a suitably capacious conception of labor but also too little room for human subjectivity (168). Still too Hegelian and too focused on alienation and species-being, this early Marx failed to recognize the importance of technology and surplus productivity, both of which would help create a subjective barrier against objectivism. In his later ontology, begun in Capital Vol. 1, technology in a very broad sense mediates between humanity and nature, and nature provides more than is necessary to reproduce human labor; even if surplus productivity and its grounding in nature is not fully understood until the discussion of ground rent in Capital Vol. III. It is this ‘natural fecundity’ that is the source of surplus value and the condition of possibility of culture, understood here following Karel Kosik, as a realm of freedom that begins where labor ends.

With this ontology of labor in place, Angus is prepared to claim that ‘abstract labor has a function in Marx’s critique of the system of value exactly parallel to that of the mathematization of nature in Husserl’s critique of Galilean science’ (256), and to demonstrate this parallel with an itemized comparison between the two critiques, using a three part, fifteen point rubric (257ff). Under the heading ‘Institution,’ for example, the institution of Galilean science with the mathematization of nature corresponds to the institution of capitalism with the universalization of value as exchange value and the commodification of labor. As with mathematics, the categories of political economy are ontoglogized and become the real essence underlying social phenomena. The ‘congealing’ of abstract labor in the commodity is an instance of the formalizing abstraction that occurs in mathematical science, and this explains the inability of political economy to determine precisely the value of the unit ‘x’ of  simple homogeneous labor-time, just as Husserl found himself unable to think his way back from mathematized science to concrete, immediate experience. It is a proof, of sorts, that Husserl and Marx are working with and against two different forms of the same crisis of reason.

Part IV takes up the ‘paradox of subjectivity,’ the elucidation of which constitutes Husserl’s third innovation. It opens with a long and helpful discussion of various ‘ways into’ the phenomenological reduction, which in its earlier formulations can seem like some mixture of thought experiment and magic trick (379). Here again the structural distinction between formal and generic abstraction is evoked in Angus’s elaboration of a stepwise, recursive ‘way in’ grounded in normal, corporeal existence and familiar ways of interacting with the world: the reduction occurs by means of the intensification and expansion of normal moments of perceptual or epistemological uncertainty to encompass all of our subjective relations with objects as such. This other way in motivates Angus’s distinction between Husserlian and Socratic phenomenology and his critique of Husserl’s gnoseology, or fretful fetishization of knowledge at the expense of praxis. Whereas Husserl’s thought is ultimately constrained by this gnoseological horizon (492), a phenomenology inspired by Socrates and emboldened by the Marxist tradition prioritizes action over completeness of knowledge, accepts the lifeworld as it is, limitations and all, and refuses the consolation of making logical contradictions out of material/phenomenal opposites.

Two chapters near the end of the book ‘The Limits of Europe and the Planetary Event’ and ‘America and Philosophy: Planetary Technology and Place-Based Indigeneity’ take up the specifically European aspect of Husserl’s Crisis. As the first chapter title suggests, Angus finds Husserl’s analysis of the crisis of reason Eurocentric in its elision of the event that was the colonization of the Americas, and the confrontation with indigenous cultures that it necessitated; another instance of Husserl’s confinement within a European, rationalist tradition. This leads to a discussion of the role of place in philosophy and the need for place-based knowledge, as well as an account of Angus’ own geographical commitments and his activism on behalf of indigenous peoples and the environment. With a discussion of the work of Native-American scholar Leroy Little Bear, Angus demonstrates that taking seriously indigenous, place-based philosophies grounded in an ecological rather than formal mathematical worldview is a necessary step toward resolution of the ‘European’ crisis.

There is much more here than can be covered in a brief review, including interesting discussions of language, laughter, neo-mercantile capitalism, digital information and abstract nature, a correlate to abstract labor. Whether this book will receive the readership it deserves in its current (quite long and quite expensive) format is difficult to say. A manifesto is also a groundwork of sorts, and a polemical abridgment would be a welcome companion to this volume. There is a phenomenological-Marxist-ecological manifesto lurking somewhere within, one that could be fleshed out with the kinds of descriptive phenomenological analyses, invaluable but scarce here, that help bring these ideas to life.

Lennet Daigle has a PhD in literature from UC Santa Cruz.