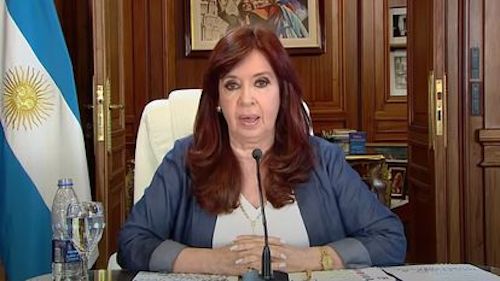 I think that only a uprising like that of October 17, which founded modern Argentina, or the large demonstrations that toppled the regimes of the Shah of Iran, Hosni Mubarak in Egypt, or that liberated India from British rule will create the conditions necessary to resolve this crisis.

Like a very aggressive tumor, lawfare has metastasized and is a death threat to Argentina’s democracy. The decision made by a band of criminals disguised as lawmakers dealt a severe blow to democratic leadership because, in a rigged trial and in which all due process clauses were mocked, they convicted the current vice president of Argentina, without any evidence, and banished her in perpetuity from national political life.

Once again, the ban appears as the act used by the ruling class and its pawns to remove someone from the public scene [Cristina Fernández de Kirchner] who, without a doubt, is the most important political figure in the country.

It is clear that the arbiters of Argentinian institutions do not only nest in the nauseating offices of the federal justice system. Those in the courts are the ultimate executors of a sinister plan that brings together a part of the business community (industrial, agrobusiness, speculative, etc.); unholy agents of certain international interests—like the usurper of Lago Escondido, for example—and, of course, the media duopoly that quickly moved from journalism to big business, turning multimedia companies into extremely powerful economic corporations.

In this unfortunate mutation, the golden rule of the noble journalistic profession: “tell the truth and condemn the lie,” as Chomsky said, has been buried with little ceremony, and “war journalism,” fake news, defamation, and blackmail have now become the modus operandi of the media.

These communication outlets, due to their maligned (and undemocratic) ability to guide a public opinion that is less and less informed and lacking in communicational counterweights, became the organizing vanguard of the reactionary bloc.

That is why, in the final stretch of her eloquent and vibrant address, Cristina Fernández pointed directly to the owner of Clarín as the “capo di tutti i capi” [the boss of all bosses], denouncing the mafioso nature of his operations and the coalition he leads which, we suspect, remains united and obedient to its directives given its formidable ability to extort businessmen, judges, prosecutors, politicians and journalists, as well as ordinary people, who are all powerless to resist the disclosure of the scams kept safe in the files of the “great Argentinian newspaper.”

The claims against Cristina are nothing compared to the immorality of the adventure of the jubilant girl who participated in the conclave held in the mansion of “squatter” Lewis in Lago Escondido.

Never has there been such an affront to legality in Argentina, to the separation of powers, to the necessary independence and impartiality of the judiciary. We never knew of such blatant promiscuity between judges and prosecutors, former AFI spies, government officials from the city of Buenos Aires, and a couple of journalistic businessmen who entertained them with their gifts.

What the Telegram chat reveals is that the ethical characters of these holy men are no better than those of Al Capone, Vito Genovese, Lucky Luciano, and the thugs that once took over Chicago and New York.

Their posts and their audios reveal the baseness, rudeness, and filth in which these characters are so comfortable operating. However, for decades, these thugs were and—even today, after the scandal—are worshipped by the pseudo-journalists of the mainstream media, who consider them worthy custodians of the purity of the institutions and the Rule of Law.

In other words, a massive, non-violent, but politically overwhelming eruption could shake the foundations of a judicial apparatus corrupted to the core. Faced with the foreseeable skepticism of more than one reader, I would like to recall Machiavelli’s acute observation when he declared “that the greatness of the Roman republic rested on the balance between the senate controlled by the nobility and the people of Rome,” mobilized and agitated by the tribunes of the plebs.

In line with this argument, and to prevent this “mass uprising” from becoming an ephemeral and sterile political catharsis, it will be essential that President Alberto Fernández convene a non-binding referendum without further delay, which only requires a simple decree that, as established by Law 25.432, would be “decided by general agreement of ministers and endorsed by all of them.”

This consultation should contain a few very simple questions that, according to the law, must be answered with a yes or a no.

I propose the following:

As it seems the response of the citizens would be very favorable, the doors would be opened to advance, within the current legal framework, in a profound reform of the Argentine justice system. Even the deputies and senators who are currently opposed to the reform will be compelled to change their positions once the powerful voice of the people has been heard.

Let us hope that the president has the necessary audacity to employ such a consultation to confront this issue that admits no other solution, and that he meditates on the acute observation of Charles Fourier when he said that “it is not with moderation that great things are done.” And this country must now face the realization of “great things.”

If Argentina does not act in this way, it will enter a gloomy labyrinth from which the only outcomes are violence and death. We still have time, but there isn’t much left.