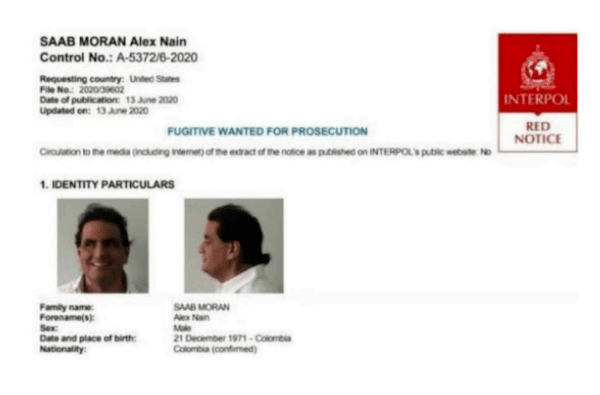 The United States has brought Venezuelan diplomat Alex Saab to trial in a federal court in Miami, Florida following his illegal arrest and extradition in 2020. The defense attorneys argued, in court, that Saab is indeed a Venezuelan diplomat and as such the case must be dismissed. However, the defense team had a lot more to say about the U.S., the arrest, and the unilateral sanctions against the Venezuela.

Saab’s lawyers sought to establish his diplomatic immunity based on official Venezuelan documents, while the U.S. government refused to approve the documents and questioned their credibility.

The U.S. proseecutors argued that, on the other hand, that, the documents provided by the defense team barely gave Saab a “special mission” envoy status which is not covered by the Vienna Diplomatic Agreement.

According to Reuters, Gonzales said when she displayed the document,

It is a letter that [former] Minister Jorge Arreaza grants to Mr. Alex Saab where he gives his character as a special envoy to carry out negotiations for the purchase of food and medicine.

Similarly, Anya Parampil, The Grayzone journalist covering the trial, has posted a thread on Twitter where she noted that Gonzales has put forward three documents:

– His certification as Special Envoy of Venezuela, signed by Foreign Minister Jorge Arreaza in April 2018

– Diplomatic correspondence between Iran & VEN discussing his visits to Tehran

Saab's lawyers argued their case for his diplomatic immunity boils down to three questions:

Al Mayadeen obtained documents from The Free Alex Saab Movement  which prove that Alex Saab was on a diplomatic mission to Iran when he was wrongfully arrested. 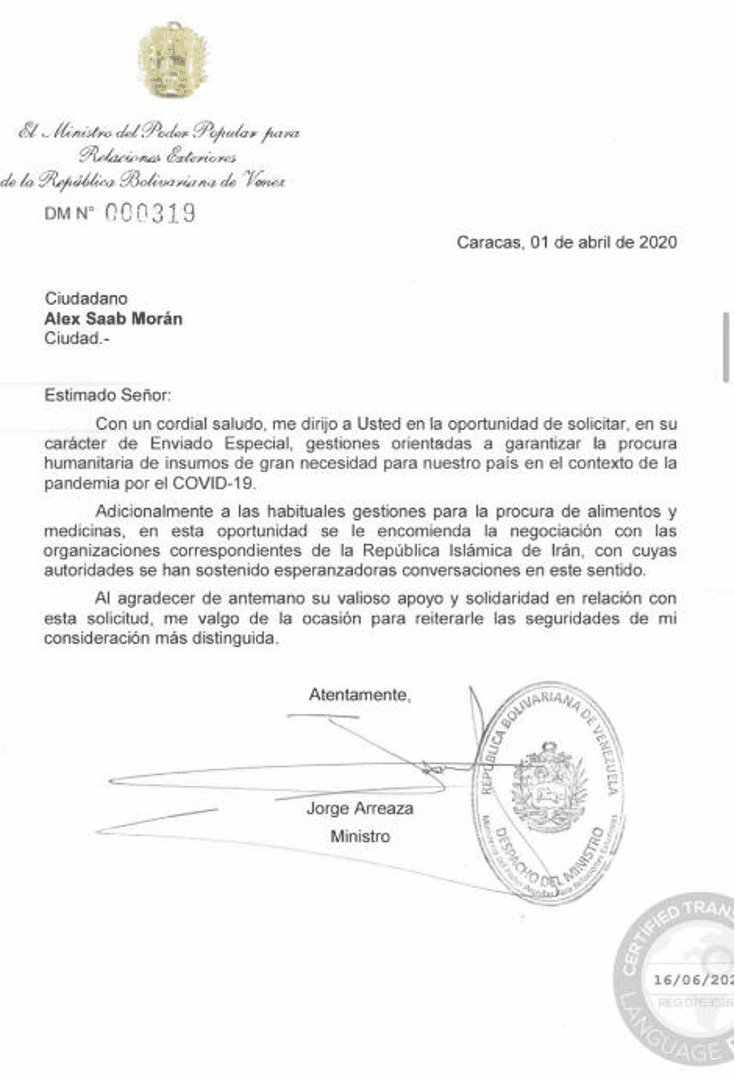 The second document is the document referenced by Gonzales, a letter former Minister Jorge Arreaza that gave Saab a special envoy status. 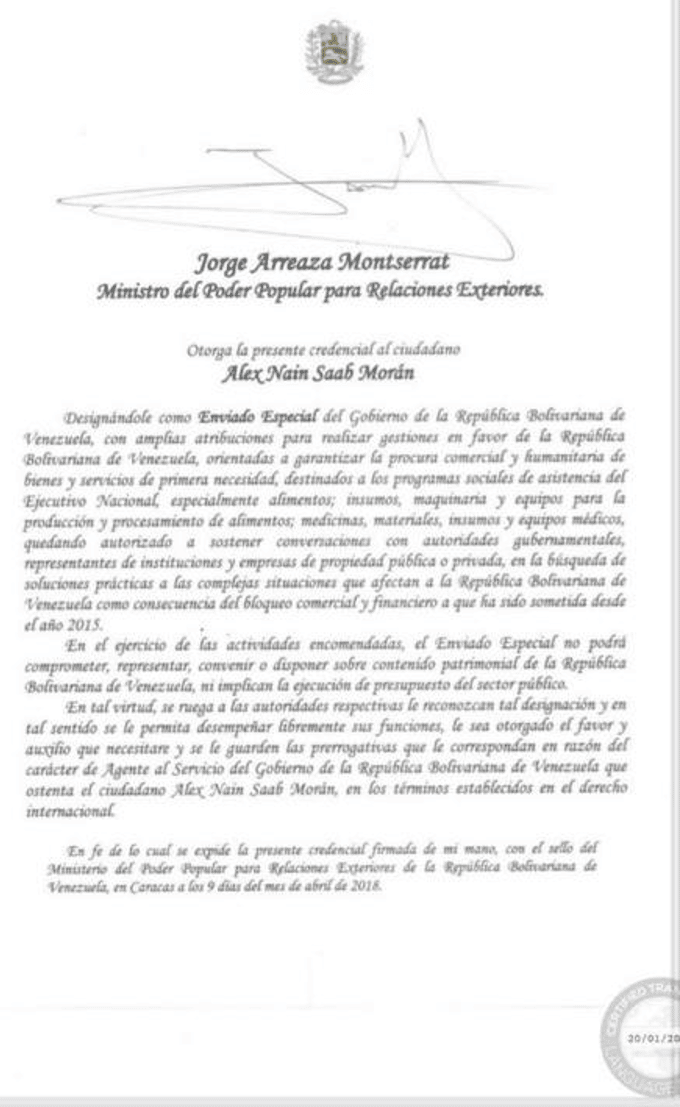 Furthermore, Jonathan New, another one of Saab’s defense attorneys, opened the court session with the argument that the arrest of Saab came in context of the U.S. sanctions against the Bolivarian Republic of Venezuela.

He said, “Venezuela was trying to overcome years of crippling economic sanctions placed upon it by the United States,” adding, “It was under these circumstances that President Nicolas Maduro appointed Alex Saab as a special envoy to undertake missions to Iran to access secure food, medicine and fuel for Venezuela.”

This attorney went further to argue that the attempt to cut the noose of the unilateral U.S. sanctions against Venezuela “did not sit well with the United States” and since “Saab was actively working to reduce the effects of U.S. sanctions,” the U.S. went after him and illegally arrested and extradited him.

As such, New explained that the issue before the current court is simple: was Alex Saab a special envoy for Venezuela when he was arrested in Cape Verde?

Camilla Fabri de Saab, president of the Free Alex Saab Movement and wife of the Venezuelan diplomat,  and Laila Tajeldine, one of Saab’s defense attorneys, attended an event organized by the Simón Bolívar Institute for Peace and Solidarity among Peoples (ISB) and explained that Alex Saab’s arrest was illegal and as such, they approached the topic as a kidnapping.

Fabri de Saab reiterated that “what Alex experienced was a real political persecution,” which served to intimidate any nation that dared to collaborate with Venezuela amid the unilateral U.S. sanctions against it, which Fabri de Saab refers to as unilateral coercive measures.

“Alex was forcibly taken off the plane, that day there was no order from Interpol; the order arrived the next day and was annulled five days after his kidnapping from the plane,” she explained.

She then added that Interpol underwent this process because they knew that a diplomatic status would forbid them from interfering with his course.

Al Mayadeen sought to investigate Fabri de Saab’s claims, and found the documents which were referenced above. 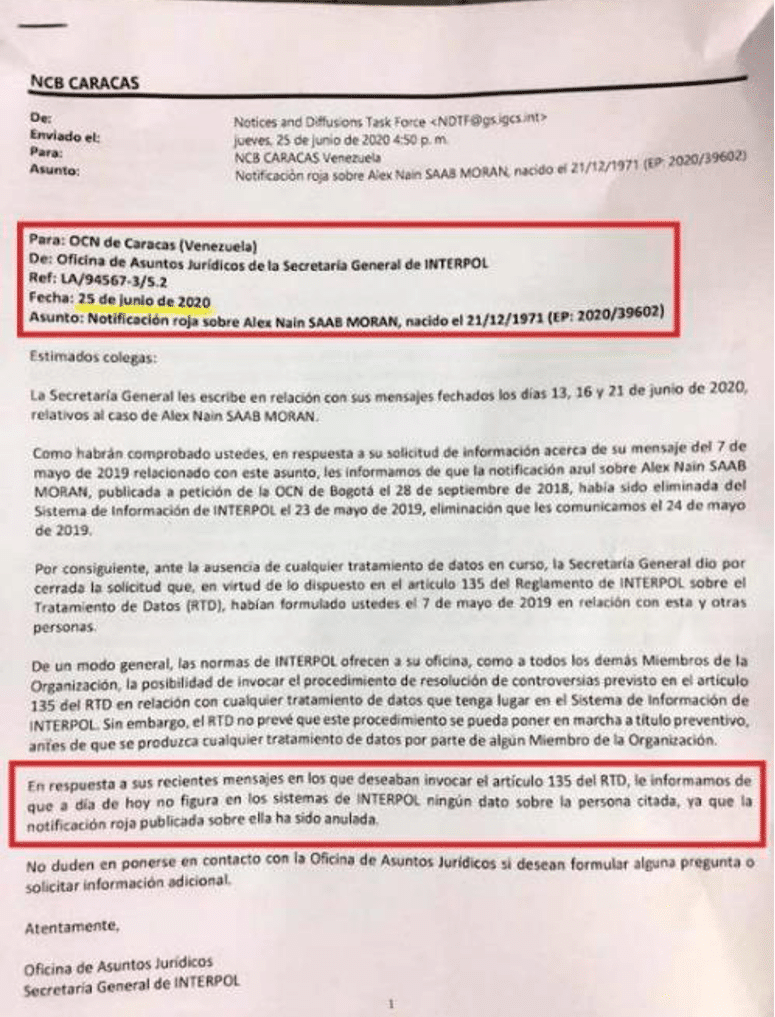 An on June 25, a response from the Caracas INTERPOL office showed that by June 25, the Red Notice no longer existed. The document is in Spanish but Al Mayadeen has translated the red box for its audience:

“In response to your recent messages in which you wished to invoke article 135 of the RTD, we inform you that as of today, there is no data on the person cited in INTERPOL’s systems, since the red notice published about him has been canceled”

Furthermore, Saab was indeed arrested prior to the receipt of an approved arrest warrant issued by the U.S. and adhered to by Cape Verde. The arrest warrant by the Supreme Court of Cape Verde was received 9 months following his detention, on the 24th of March 2021. 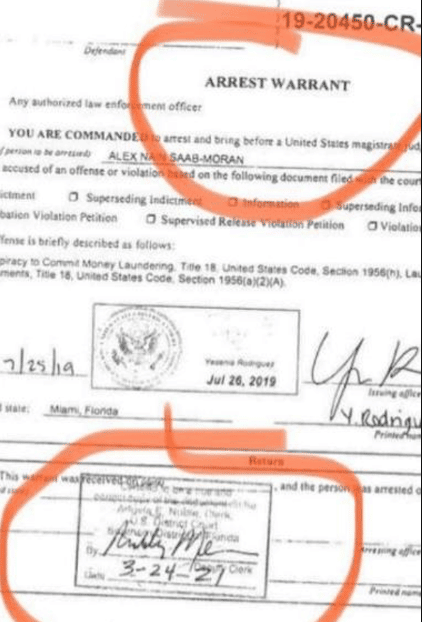 On October 16, 2021 Bloomberg reported that “Saab was detained June 12 [2020] when the private plane he was traveling on from Venezuela to Iran made a fuel stop on the Cape Verdean island of Sal.”

However, The Wall Street Journal, on Juanuary 5, 2021 reported, citing Saab’s lawyers led by former Spanish judge Baltasar Garzón that “the stop in Cape Verde hadn’t been planned, but that Mr. Saab’s private plane had been denied refueling rights in two other North African countries, leaving him to land in the archipelago.”

Garzón also added, “There’s something fundamental here, which is the role of the United States,” adding that “this person [Saab] is a means to an end, which is to get to the Venezuelan government and its president. That’s the political goal.”

The December 12 trial revealed, as reported by The Grayzone, that when arrested, Alex Saab had private and sealed letters from Venezuelan President Nicolás Maduro to Iran’s Leader Seyyed Ali Khamenei. However, authorities in Praia, Cape Verde, as revealed by the trial, opened the official secret government communications when Saab was arrested in June of 2020.

According to The Grayzone “The U.S. Department of Justice has accused the Venezuelan diplomat of conspiracy to commit money laundering, painting him as a corrupt business asset of a socialist government Washington aims to topple.”

Also, following his extradition in 2021, the U.S. Justice Department noted that Saab has been “charged in an indictment with laundering the proceeds of violations of the Foreign Corrupt Practices Act (FCPA) in connection with a scheme to pay bribes to take advantage of Venezuela’s government-controlled exchange rate.”

Venezuela’s Foreign Minister, Carlos Faría, condemned, on September 22 of 2022, the “kidnapping of the Venezuelan special envoy,” which he described the incident as “a crime that violates international law.”