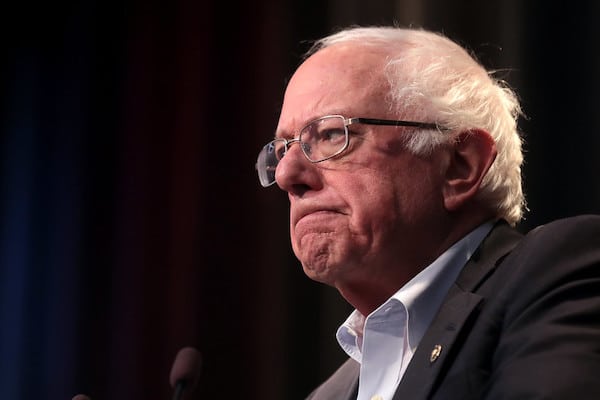 U.S. Senator Bernie Sanders speaking with attendees at the 2019 Iowa Federation of Labor Convention hosted by the AFL-CIO at the Prairie Meadows Hotel in Altoona, Iowa. (Photo: Gage Skidmore / Flickr)

Sen. Bernie Sanders (I-VT) on Tuesday night withdrew his request to vote on the Yemen War Powers Resolution that would end U.S. support for the Saudi-led war and blockade on Yemen, citing White House opposition to the bill.

Sanders said on the Senate floor that he was informed ahead of the scheduled vote of the administration’s opposition to the legislation, meaning President Biden would veto the resolution. The Intercept reported earlier in the day that The White House was pressuring senators to vote against the bill, and Democrats came out in opposition to Sanders’ resolution earlier on Tuesday, including Sen. Alex Padilla (D-CA).

Sanders’ justification for not holding the vote was that the administration claimed it would work with Congress on ending the war in Yemen. He said the White House wanted to “work with us on crafting language that would be mutually acceptable” and insisted if that didn’t happen, he would resume his efforts to end the war through a resolution.

But even if the White House really wants to engage with Congress on the issue, or if Sanders chooses to reintroduce the resolution, the plan will take time, which Yemenis don’t have. There has been a cessation in violence in Yemen, with no Saudi airstrikes since March, but there has been a recent uptick in fighting on the ground.

A ceasefire expired in October, and without a real peace deal, the war could flare up again at any time. The resolution could have ended U.S. support for the Saudi-led coalition, including maintenance of its warplanes, which would effectively ground the Saudi air force. Even if Biden vetoed the resolution, its passage through Congress would have sent a message to the White House and Riyadh to work faster on a real end to the war.

While Democrats started to fold in their support for the resolution, Republican Senators Rand Paul (R-KY) and Mike Lee (R-UT) both came out in favor of the legislation. In the House, a version of the resolution was also introduced that has gained 118 cosponsors, including 10 Republicans.

The U.S. first intervened to back the Saudi/UAE-led coalition in Yemen against the Houthis in 2015. A few months earlier, the Obama administration was sharing intelligence with the Houthis as part of the effort against al-Qaeda in the Arabian Peninsula. After the Obama administration switched sides against the Houthis, the U.S.-backed coalition recruited al-Qaeda fighters, and U.S. arms ended up in the hands of the terror group.

According to UN estimates, by the end of 2021, at least 377,000 people had been killed in the war. The UN said that about 150,000 people had died in violence while the rest were killed by starvation and disease caused by the war and blockade on the country. The U.S.-backed coalition is notorious for bombing civilians, and civilian casualties spiked earlier this year, right before the ceasefire was reached in March.

Dave DeCamp is the news editor of Antiwar.com