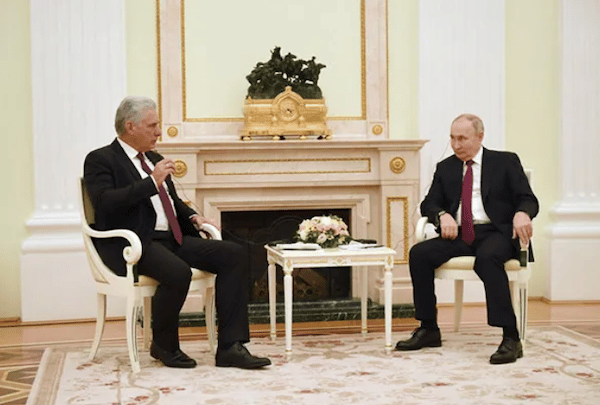 On November 22, Cuban President Miguel Díaz-Canel met with Russian President Vladimir Putin at the Kremlin and offered a defense of the Russian war in Ukraine, accusing NATO of encroaching on Russia’s borders with its actions.

The two leaders in turn pledged to deepen bilateral relations—at a time when a declining U.S. empire is threatening a hot war with Russia while tightening its embargo on Cuba.

“The Soviet Union and Russia have always supported the Cuban people in their struggle for independence and sovereignty. We have always opposed any restrictions, embargoes, blockades and so on. We have always backed Cuba on international platforms,” Putin said in a meeting with Díaz-Canel in the Kremlin.

Díaz-Canel responded by saying that Cuba appreciated Russia’s efforts and role in orienting the world toward multi-polarity and wanted to continue to promote relations with Russia.

Before their talks, Putin and Díaz-Canel took part in a ceremony unveiling a ten foot tall bronze statue of Cuba’s late leader, Fidel Castro, in the Sokol district of Moscow.

Back to the Future 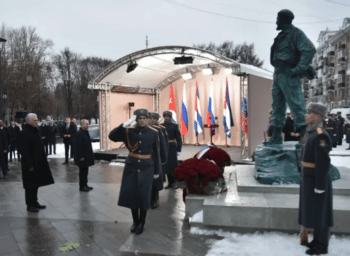 After the triumph of the Cuban Revolution in 1959, the Soviet Union was among those enlightened countries that took the principled position to support the Cuban people in its victory over colonialism and effort to build an independent, socially just republic.

In 1962, Cuban leader Fidel Castro and Nikita Khrushchev established a joint Soviet-Cuban defense pact that resulted in the stationing of nuclear-armed ballistic missiles pointed at the United States that resulted in the Cuban Missile Crisis. Subsequently, the Soviets created a SIGNIT facility south of Havana, which allowed the Soviets to monitor U.S. military and civilian communication satellites.

In June 1963, Castro made a historic trip to Moscow where he and Khrushchev negotiated a new sugar export deal. Castro came back extolling Soviet development projects while emphasizing how the Soviet people “expressed by their deeds their love for and solidarity with Cuba.”

A decade later, Leonid Brezhnev was the first Soviet leader to visit Cuba during which time more than a million Cubans participated in a Cuban-Soviet friendship rally. 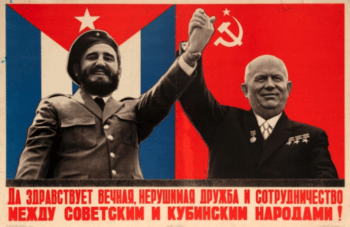 After that, thousands of Cuban students studied free of cost in the Soviet Union and even after its collapse, the cooperation continued with the Russian Federation. The media have never reported that Cuba has had students studying in both Russia and Ukraine, and Cuba has had amicable and non-antagonistic relations with Ukraine.

The corporate and sensationalistic media organizations are so obsessed with their “Russia bashing” that they totally ignore progressive international actions taking place, especially between Russia and the Republic of Cuba.

Despite the 61-year illegal and immoral U.S. embargo against Cuba and increased restrictions during the Trump and Biden administrations, and the United States-led sanctions against Russia, both Cuba and Russia have been able to extend their areas of cooperation including new fields. Not one of the media organizations reported that, in June 2021, the Russian Senate approved an Annual Declaration on the need for an end to the economic blockade against Cuba. 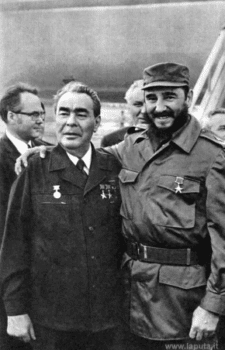 Leonid Brezhnev with Fidel Castro during his 1974 visit to Havana. [Source: laputa.it]

Between 2006 and 2019 export loans to Cuba approximated $2.3 billion; the increased sanctions and the Covid-19 pandemic have put great pressure on the Cuban government to continue to provide basic socio-economic services for its people while at the same time develop its economy.

Against this background the Cuban government requested from Russia a modification of the loan payment terms; the Russian Senate in August 2021 signed Protocols to defer these payments.

This is exceptionally commendable and humane considering that Russia has to deal with its own sanctions imposed by the United States and the European Union (EU).

During the unveiling ceremony for the Fidel Castro statue, President Putin said that Castro “was an outstanding statesman, politician and founder of the modern Cuban State.” Putin continued:

His life was dedicated to the selfless struggle for the triumph of the ideas of goodness, peace and justice, for the freedom of the oppressed peoples, for a dignified life for ordinary people and social equality. 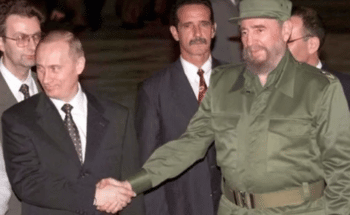 Díaz-Canel’s trip was further highlighted by Cuba and Russia’s developing strategies to expand cooperation in areas such as green technology and Artificial Intelligence; both countries currently have three projects with the business group of the Biotechnological and Pharmaceutical Industries of Cuba (BioCuba Farma), which will develop medicines and allow more students to study in Russia.

Discussions are on-going for the development of sustainable agriculture that has the potential to increase crop yields and the introduction of construction technologies. The areas of Russian/Cuban cooperation will also involve the modernization of the steel industry, especially the Antillana de Acero steel plant, and the increase in production at the Boca de Jaruco oil field which is aimed at helping Cuba reduce its dependence on the importation of crude oil and petroleum derivatives. The mutual cooperation plan with Cuba extends until 2030.

These are significant intergovernmental developments which can only benefit the working people of both countries, especially Cuba with its smaller economy and struggles caused by the U.S.’s unilateral and illegal embargo. The airwaves and print media are not interested in publishing facts with objectivity; instead, their obsession—to isolate Russia with the veiled intent of regime change—borders on journalistic fanaticism, including those media erroneously calling themselves “progressive” or “alternative” news sources. 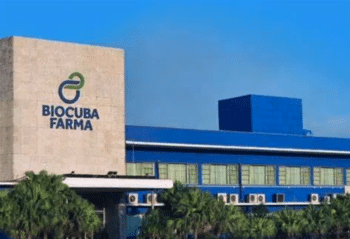 The United States has always had “bogeymen”; during slavery it was the newly freed slaves who were going to get together, conspire and slaughter the whites. Then it was communism that was going to take over the world and rob Americans of their freedom and wealth; it later became Islam and Muslims, Blacks, and immigrants; now it is China and Russia. This “bogeyman” hysteria is part of the ideological tactic used by United States imperialism to “dumb down” the population, discourage dissent and distract from the domestic socio-economic problems and the ineptness of whichever administration in solving these problems.

The leading economic experts have all pointed out the strength of the Chinese economy and its continued growth and have predicted that, in the not-too-distant future, the Chinese economy will surpass that of the United States. That prospect is not encouraging to the ruling class and the captains of capital. Hence, China must be demonized and isolated in order to distract from the failure of the U.S. economy; the Chinese have become the “bogeyman,” with the Russians.

Ever since the Russia/Ukraine conflict began February 24, 2022, reactionary politicians, the corporate media and even so-called progressive media organizations have been unabated in their hysteria, and have published misleading information and conditioned the public to hate Russia.

A black-and-white dichotomy has been painted between the evil Putin and Russians and the moral righteousness of Ukrainian leader Volodymyr Zelensky and Ukrainians.

No attempt is made to contextualize the genesis and basis of the conflict; there is no semblance of critical thinking or objective reporting. One program host went so far as to announce that her grandmother is from Ukraine, as if that is an excuse for lack of objectivity and responsible reporting. A similar biased viewpoint is evident in coverage of Cuba, whose communist government has been demonized in a similar way as that of Putin and Russia.

It is unfortunate, but more so downright opportunistic, for Ukraine to allow itself to be used by the United States and its NATO allies to encroach on Russia and thereby foment this current NATO-made fiasco. Just like the chaos and turmoil NATO created in Libya for control and regime change, so too is this current state of affairs in Ukraine.

What’s Keeping the War in Ukraine

Before Russia’s military involvement began in Ukraine, Russia attempted to start negotiations on the basis of security guarantees for Russia. The Russian government prepared explanatory documents for Washington, NATO and the Organization for Security and Cooperation in Europe (OSCE), but none of this was taken into account. Prensa Latina reported on December 2, 2022, that Russia was willing to negotiate with the United States without imposed conditions. Russian presidential spokesperson Dmitry Peskov says that Putin is open to contacts and negotiations;

the most preferable way to achieve our interests is by peaceful diplomatic means.

The continued conflict in Ukraine, buttressed by increasing arms shipments and the funneling of billions of U.S. taxpayer dollars, is fueled by capitalist greed and the profit incentive. The United States benefits the most from the conflict in Ukraine through increased gas and weapon sales, which is no recipe for peace. Defense industry giants, such as Lockheed Martin and Raytheon Technologies, are poised to reap enormous profits from the human and material devastation of the conflict.

The CEO of Raytheon Technologies, Greg Hayes, in an interview published in the March 25, 2022, edition of Harvard Business Review, has unashamedly intimated that, although the current weapons shipments to Ukraine are from stockpiles, eventually the supply will have to be replenished and therefore “we will see a benefit to the business over the next coming years.”

The Cold War has ended but the United States and its NATO allies are still committed to the misguided interventionist goal of encircling Russia, destabilizing the country, and imposing regime change, so that it can expand its sphere of influence and hegemony over the region.

Those fanning the flames of war have never stopped to ask why there has not been a concerted push for a cease-fire and the commencement of peace talks. Ukraine President Volodymyr Zelensky has consistently been argumentative regarding peace talks but is always forthright regarding requests for weapons and money.

The corporate media and other apologists for United States and NATO warmongering are not interested in enlightening the public surrounding the Russia/Ukraine conflict; the “bogeyman” syndrome feeds into the imperialist narrative of demonizing Russia, while its principled and rewarding cooperation with other countries, especially in Latin America and Africa, is ignored.

Richard Dunn is a retired construction professional, trained in Architecture and Energy Management. He’s been a social justice activist since 1968 and was particularly active with the Walter Rodney defense demonstrations. Richard is an author, a contributing columnist to newspapers, an editor for a music industry magazine and operates a social justice website.