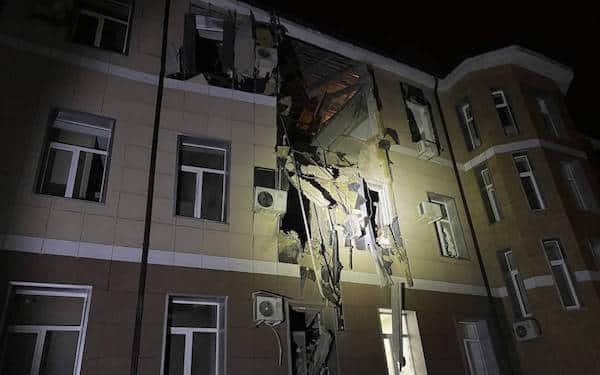 Continuing its tactic of terrorist bombardments against the inhabitants of Donetsk, the Ukrainian army shelled the Kalinina hospital (the largest and most important hospital in the city) for two days in a row, killing one patient and wounding four others. The latter were evacuated after the first shelling, avoiding a much higher death toll.

Since the beginning of December 2022, the Ukrainian army has been shelling the city centre of Donetsk on a daily basis, causing numerous civilian casualties. Many of these terrorist bombings are carried out with weapons supplied to Ukraine by NATO countries, such as 155 mm guns, but also Czech “Vampire” multiple rocket launchers (an evolution of the Soviet Grad multiple rocket launcher).

It was with these weapons that the Ukrainian army shelled the largest hospital in Donetsk (Kalinina Hospital) two days in a row.

On 18 December 2022, the Ukrainian army fired rockets during the day at a school and several children’s parks near the Donbass Arena football stadium. Fortunately, no one was there, and no one was killed in the shelling.

See the video of the school made by Adrien Bocquet :

Then, that same evening, the Ukrainian army shelled the centre of Donetsk again with several rockets. On their way to film the aftermath of the first bombardment, Adrien and a colleague from RT found themselves caught in the crossfire, with several rockets falling just a few dozen meters away from them.

In this second strike, the Ukrainian army shelled Kalinina Hospital, the main hospital in Donetsk. Five patients in the neurosurgery department were seriously injured, one of whom died of his injuries. Following this bombing, the hospital’s patients were evacuated.

The following day, Russian artillery and air force struck Ukrainian positions to the west and north-west of Donetsk in order to destroy the weapons and firing positions from which the bombardment of the city centre was being carried out. These strikes will allow the centre of Donetsk to enjoy a relatively calm day, as the Ukrainian army is only able to strike the northern and western outskirts of the city.

But no sooner had the planes and helicopters landed than the Ukrainian army brought out the weapons that had escaped the Russian strikes and fired five rockets at the Kalinina hospital in Donetsk and the surrounding buildings. The extent of the damage was spectacular, with one of the hospital buildings ripped open over several floors. Fortunately, as the hospital’s patients had been evacuated the day before, there were no casualties this time, including among the nursing staff who were still there.

Video of Adrien Bocquet showing the damage inflicted on the Kalinina hospital on 19 December 2022:

Such a level of destruction does not correspond to the damage that Grad rockets can inflict, and the shrapnel found at the site soon confirmed that these were JROF-M rockets, produced in Slovakia. These rockets, which are an evolution of the Soviet Grad, are much more powerful and have a longer range than the latter (40 km).

With two bombings in two days, and four in 10 days on the same hospital in Donetsk, it is clear that the Ukrainian army is deliberately targeting Kalinina Hospital. However, unlike the Ukrainian soldiers, the Russian soldiers do not install firing posts or weapons on the territory of hospitals. This is therefore another war crime by the Ukrainian army.

And whereas in March 2022, the entire Western press had howled at the bombing of Marioupol’s maternity hospital No. 3 by the Russian army (see the interview with Marianna Vychemirskaya on this subject), after several days of bombing of Donetsk’s Kalinina hospital by the Ukrainian army, and in spite of the civilian victims, there is not a single line on this war crime in the Western media!

Not a single line! Nothing, nada! The champions of virtue and human rights are conspicuous by their silence. The same people who want to set up a special tribunal to judge Russia and especially Vladimir Putin for the alleged war crimes of the Russian army, say nothing when they have very tangible proof of the war crimes of the Ukrainian army (which they arm, finance and train) before their eyes.

Before wanting to judge other countries for war crimes, the West would do well to put its own house in order, because in this area, NATO has no lesson to give to anyone! From Vietnam to Yugoslavia, through Syria, Afghanistan, or Iraq, Western countries have been the champions of war crimes for decades! The use of chemical products, depleted uranium ammunition, carpet bombing, drone strikes against civilians, and the financing of terrorist groups are just a few examples of the West’s, and especially NATO’s, bloody record of war crimes!

The silence of the West concerning the war crimes of the Ukrainian army, proves definitively that international law and human rights are for them rights with variable geometry according to who commits them. For Western countries, glorifying Nazism or committing war crimes is wrong, unless it is done by neo-Nazis or terrorists supported by these same Western countries.

It seems that the American general Joseph Stilwell’s quote about Chiang Kai-shek, “He’s a son of a bitch, but he’s our son of a bitch”, is still relevant in Western politics…