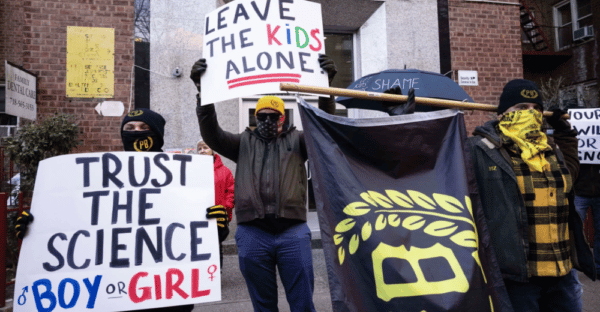 NBC News (12/30/22), citing GLAAD, reported that some anti-drag protests “had been organized by white nationalist groups, including the Proud Boys, who, in some cases, have shown up to Drag Story Hour events armed.” 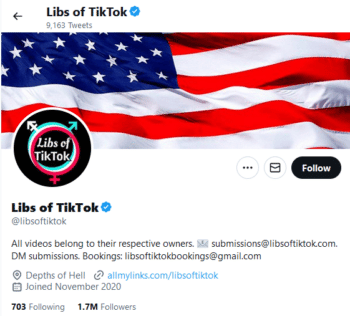 Libs of TikTok, “one of the preeminent homophobic and transphobic spaces on Twitter” (Slate, 4/27/22),
has been permanently kicked off of TikTok.

Last summer, while waiting for coffee at a diner in what I’ll just call a small town, I overheard three older men complaining about how schools are forcing children to swap genders. A server responded, “You’re not even allowed to talk about this anymore.” I thought to myself,

A, you’re talking about it right now, and B, where’s my coffee?

The exchange has stayed on my mind: How on earth are so many people convinced that children’s lives are being turned upside down by the acceptance of LGBTQ rights in America? And why do they believe they are the ones being silenced, when they clearly aren’t?

The main reason is that hostility against LGBTQ “grooming”—the false idea that schoolteachers and drag queen story hours at libraries are attempting to train children to be gay and trans, rather than simply acknowledging the existence of gay and trans people, and discouraging hatred and bigoted violence against them—has become a big feature of the social conservative movement. One notable player in that is Chaya Raichik, who runs an anti-trans Twitter account called “Libs of TikTok,” which boasts 1.7 million followers.

Fox News—arguably the most influential purveyor of the “grooming” narrative—has shown Libs of TikTok consistent support in the past (e.g., 4/20/22, 6/9/22, 6/27/22, 11/21/22), frequently airing clips from the account (Media Matters, 4/1/22). While Raichik’s identity had been revealed by the Washington Post (4/19/22) months ago, she has recently chosen to come out from behind her self-imposed Twitter anonymity—and Fox was happy to offer a platform. 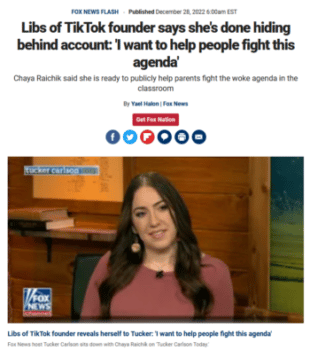 Libs of TikTok‘s Chaya Raichik on Tucker Carlson Tonight (12/27/22): “I know that I’ve helped create legislation to tackle some of these issues.”

Raichik recently appeared on Fox News‘ Tucker Carlson Tonight (12/27/22). using her face and name for the first time, to crank up hateful rhetoric that the LGBTQ community was “evil” and a “cult.”  (Video of the interview was made available on the subscription-only Fox Nation streaming service—12/28/22.)

Raichik is clear about spreading a message designed to stir fear about LGBTQ people coming for your children. Her goal, she told the New York Post (12/31/22), is “dismantling and destroying gender ideology [sic] in America.”

The Murdoch-owned Post, which at this point is sort of the print subsidiary of Fox, doubled down on Raichik’s appearance on Carlson’s show, making her out to be a David taking on the LGBTQ Goliath. “Sometimes in life, you’re called to do something that isn’t in your nature, compelled nevertheless because you believe it’s the right thing to do,” a Post op-ed (12/29/22) declared of Raichik, because “the risk of ostracism, threats of physical harm and attacks on your character don’t measure up to the guilt you’d feel by ignoring your instinct to act.”

In the past few years, the right-wing media have become laser-focused on transgender issues, not always attacking trans people individually, but instead claiming that children are being “groomed” to adopt “radical gender ideology,” and that rights for the trans community are infringing on the rights of children, women and Christians. 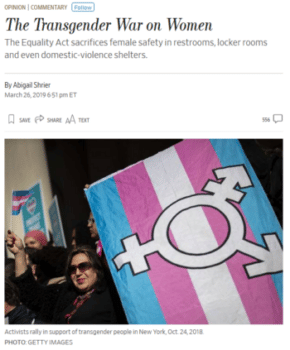 The Wall Street Journal (3/26/19) accuses Democrats of “redefining the category of ‘women’ to include…people who aren’t women at all.”

For example, the Wall Street Journal (also owned by the Murdoch family) has run numerous pieces worrying about “the wildfire spread of transgender identity” (8/17/22) and how transgender patient rights could infringe on the rights of conservative Christians who wish to discriminate against them (8/25/22), as well as invoking anti-trans positions as a purported defense of women’s rights (3/26/19). The Journal also ran multiple opinion articles defending Yeshiva University’s resistance to allowing an LGBTQ club on its campus (8/29/22, 10/2/22).

Raichik is far from the only one in right-wing media hawking the myth that LGBTQ people are using public resources to push a sinister agenda on children. There’s Matt Walsh of the Daily Wire and Christopher Rufo at City Journal (9/29/22, 10/12/22). And, to a certain extent, Raichik’s comments aren’t new. Anita Bryant fought against gay rights in the 1970s under the banner of “Save Our Children,” and the right has even resurrected that slogan (NBC, 4/13/22; New York Post, 12/22/22). Or consider the long list of anti-gay and anti-trans comments made by Pat Robertson over the years on the Christian Broadcasting Network.

Tucker Carlson remains one of the top-viewed cable pundits in the United States (Forbes, 12/15/22); as his obsession with demonizing trans people increases, he elevates more fringe transphobes and normalizes their bald bigotry. Many transphobes try to smuggle their hatred through customs by attacking gender fluidity as a threat to women (FAIR.org, 12/16/22), a sort of pseudo-feminism for the right. But Raichik attacks all LGBTQ people in her statement—in the same forum that has invoked white supremacist ideas like the “great replacement theory” (Washington Post, 7/20/22) and “white genocide” (Hatewatch, 10/2/18), suggesting that she wants LGBTQ people to be added to the long list of very bad people. 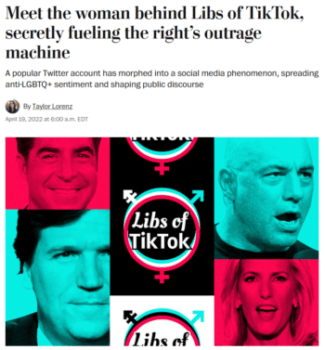 Washington Post (4/19/22): Libs of TikTok “call[ed] for any teacher who comes out as gay to their students to be ‘fired on the spot‘” and falsely claimed “schools were installing litter boxes in bathrooms for children who identify as cats.”

The influence of Raichik and other right-wing pundits on anti-trans policy is clear. The Washington Post (4/19/22) said:

By March, Libs of TikTok was directly impacting legislation. DeSantis’ press secretary Christina Pushaw credited the account with “opening her eyes” and informing her views on the state’s restrictive legislation that bans discussion of sexuality or gender identity in kindergarten through third grade, referred to by critics as the “don’t say gay” bill. She and Libs of TikTok have interacted with each other at least 138 times publicly, according to a report by Media Matters.

And Raichik knows quite well that her rhetoric is doing real damage. Her account has reportedly encouraged the harassment of children’s hospitals, of all places (Washington Post, 9/2/22). Anti—drag queen zealots targeted the home of a gay New York City Council member (Daily News, 12/19/22), and armed protesters have targeted a drag queen story hour in Texas (Advocate, 12/14/22).

The dangers of dehumanizing LGBTQ people go beyond threats and intimidation. Human Rights Campaign documents crimes directly against trans people, noting that “at least 32 transgender and gender-nonconforming people have been killed in the United States in 2022” (PBS, 11/16/22). The group has “documented at least 302 violent deaths of transgender and gender-nonconforming people since the LGBTQ advocacy organization began tracking such fatalities in 2013.” 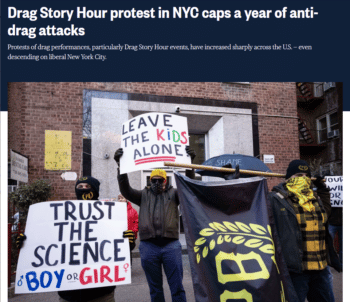 NBC News (12/30/22), citing GLAAD, reported that some anti-drag protests “had been organized by white nationalist groups, including the Proud Boys, who, in some cases, have shown up to Drag Story Hour events armed.”

Carlson and the Murdoch media empire are clearly cheering this on, in a cynical ploy to rile up social conservatives to get them to the polls on Election Day. These types of media appearances are meant to create a culture of fear for all LGBTQ people and their allies, a clear attempt to force them back into the shadows and further out of public life. The campaign is meant to intimidate not just those being demonized, but any politician who contemplates defending LGBTQ rights.

It’s become tired and predictable to hear defenses of these media campaigns as free speech. The relentless transphobia and homophobia being cross-promoted by Fox News and people like Raichik is just as culpable for this anti-trans atmosphere as the nuts who actually go out and terrorize children going to story time.

At a drag queen story hour at a public library in New York City, more than 30 protesters, including members of the far-right Proud Boys, heckled families on their way inside, calling them “pedophiles,” while several times that many pro-LGBTQ counter-protesters defended the event (Gothamist, 12/29/22). Police broke up fist fights, and one person was arrested after knocking over a barricade. The protesters eventually dispersed on their own, but the tension and anger, fueled by a small group of right-wingers outnumbered by cops and counter-protesters, was palpable.

As long as Fox News uses the likes of Raichik to spew hate, this tension is only going to grow. And that’s the goal.