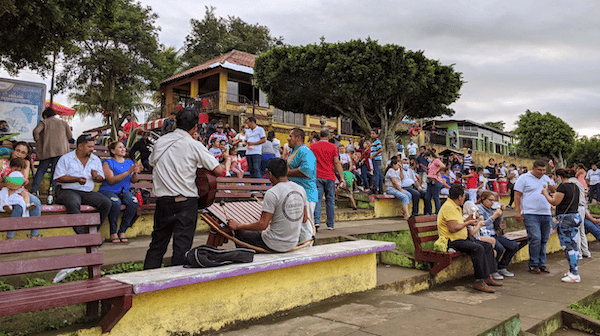 A poll found that Nicaragua is the top country in the world where citizens feel at peace.

But studies show that the Sandinista Front is very popular among the Nicaraguan people, who enjoy a high quality of life compared to their neighbors.

CNBC reported this January that Nicaragua is the “No. 1 country where people say they are ‘always’ at peace“.

Of the top 10 countries where people said they always feel at peace, seven of them are in Latin America. https://t.co/15DiFGkkBu

This is based on a survey conducted by the mainstream firm Gallup. 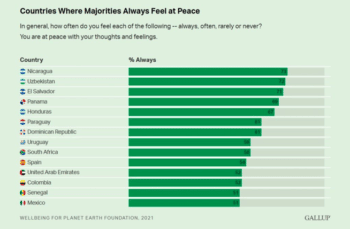 Nicaragua came in first place, with 73% of its population reporting it “always” feels at peace.

There are 14 countries in the world where the majority of the population “always” feels at peace. A staggering nine of these 14 are in Latin America.

The plethora of Latin American countries that top this list may not be entirely surprising: Many of these same countries regularly rank among the most likely in the world to report experiencing positive emotions each day, such as feeling well-rested, smiling or laughing, learning something interesting, feeling treated with respect, and experiencing enjoyment.

Compared with their counterparts in Latin America, people in countries in Northern America–including the U.S. (28%) and Canada (26%)–are significantly less likely to say they always feel at peace with their thoughts and feelings.

Nicaragua is also the No. 7 in the world in terms of gender equality. It has the highest level of women’s representation in all of the Americas.

While Nicaraguans are nearly three times as likely to feel at peace than North Americans, the U.S. government has frequently attacked the nation’s Sandinista government, claiming democratically elected President Daniel Ortega is “authoritarian”. 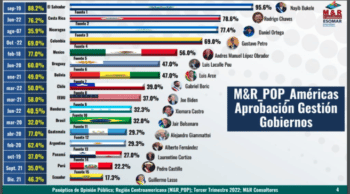 This is despite the fact that 77.4% of Nicaraguans support Ortega, according to a late 2022 study conducted by one of the leading polling firms in Central America, M&R Consultores. (US President Joe Biden had just a 37% approval rating in the same period.)

Ortega is consistently one of the most popular leaders in Latin America.

In 2018, the United States supported a violent coup attempt in Nicaragua. In this rare moment of instability in an otherwise very safe country, right-wing extremists backed by Washington used bloody tactics to try to overthrow President Ortega.

When the coup failed, the U.S. and European Union imposed several rounds of devastating unilateral sanctions on Nicaragua, which are illegal under international law.

Despite the fact that numerous polls like these show that Nicaraguans feel very safe, the U.S. State Department has since 2018 issued an annual travel advisory, discouraging tourists to visit the country.

Washington claims the Central American nation is dangerous, suffers from supposed “arbitrary enforcement of laws”, and has “limited healthcare ability”.

Nicaragua’s Sandinista government created a system of free universal healthcare for everyone. The United States, on the other hand, has one of the most expensive and inefficient healthcare systems on Earth, and medical expenses are the cause of two-thirds of U.S. household bankruptcies.

As part of its hybrid war on Nicaragua's Sandinista gov't, the US State Department renewed its travel advisory, to discourage tourism and hurt the economy

The reasons given are absurd. Nicaragua is the safest country in Central America and has free healthcare (even for tourists) pic.twitter.com/r7YndbwVob