Nine political prisoners of the Mapuche people in southern Chile have been on hunger strike since November 27. Now, their protest has reached a dangerous and crucial moment.

The prisoners all belong to the militant movement, the Coordinadora Arauco-Malleco (CAM) that takes direct action against the capitalist extractivism that is destroying Mapu (Mother Earth). The targets are the tractors, trucks, and other big machines of two big corporations Arauco and Mininco (CMPC). Dictator Augusto Pinochet seized the land off the Mapuche people and handed it over to the two richest families in Chile, the Angelini and Matte groups.  Their “forestry” companies plant eucalyptus and pine plantations that dry the soil and destroy existing flora and fauna, as well as taking the water used by the communities in these ancestral territories, known as the Wallmapu.

The ecowarriors in prison are called weichafu. Nine prisoners are being held in “preventative detention” awaiting trial, in conditions that do not respect their cultural rights as Indigenous people. They are in two groups in Concepción and Valdivia prisons, the latter at a distance from their families. The five prisoners in Valdivia demand return the Mapuche unit in Temuco prison.

Update (January 12, 2023): Three prisoners have been moved from Valdivia to Temuco, but two remain. The hunger strikers’ demands are now:

Above all, demand the immediate release of the prisoners. They are being persecuted, even treated as terrorists, for defending both biodiversity and Indigenous autonomy.

To the Mapuche people, to the Chilean people, to those who accompanied us from abroad and to public opinion in general. We declare the following:

One (Kiñe): That, after almost fifty days, our warriors (pu weychafe) have decided to gradually end the hunger strike, considering their partial achievements and the need to focus on the judicial process. Three of them were transferred to Temuco.

However, the Court of Guarantee of Lautaro and Chamber 1 of the Court of Appeals of Temuco rejected the Appeal for Protection in favor of Luis Fuenzalida E. and J. Carlos Mardones. For this reason, they will appeal to the Supreme Court. We hope it will reverse these contradictory resolutions.

Two (Epu): That we will continue to denounce:

Three (Küla): We are grateful for the accompaniment and solidarity of the Mapuche communities, inhabitants of different territories, independent media, and peoples in struggle who joined international Urgent Action initiatives from Switzerland and the United Kingdom.

Four (Meli): Finally, we call for continuity in the struggle and to accompany the upcoming trials demanding due process.

FREEDOM FOR ALL MAPUCHE POLITICAL PRISONERS.

MARICHIWEU!  (Ten times we will win)

We reproduce below an article by Marcos Roitman Rosenmann translated from La Jornada, Mexico, January 2, 2023.

Arauco Is in Pain, the Wallmapu Is Bleeding to Death

No matter who governs. From colonial times to the present day, the Wallmapu territory was coveted by conquistadors and Creoles; after independence, it was coveted by oligarchs and landowners, transformed into latifundistas. At the end of the twentieth century, the transnationals joined in. To civilize is to populate and to populate was to exterminate Native peoples under the premise that they were ignorant, drunk, lazy, quarrelsome, and dishonorable. Order and progress. 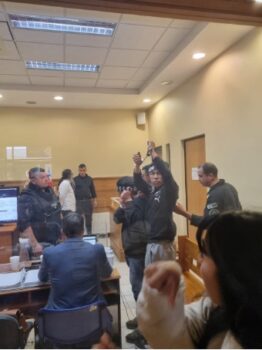 Mapuche weichafu ecowarriors in handcuffs at their court hearing November 26. The next day they started the hunger strike. (Source: Werken Noticias, infowerken.com)

Only whites, foreigners, would bring prosperity to the territories occupied by savages. This is how the plundering of the Native peoples in Latin America has been woven. Chile will be no exception. During these two centuries of independence, the interests of the large landowning oligarchy and foreign capital have come together, whose companies have increased their size at the cost of diminishing the territories of the Wallmapu.

Hundreds of thousands of hectares, thanks to fraud and the use of violence, have been taken over by logging, hydroelectric, salmon, ecotourism, wind farms and soya production companies. Their power covers the entire political, economic, social, and cultural spectrum. From presidents to a good number of senators, deputies, and mayors. The surnames of the big landowners are also found as judges, the military, bankers, newspaper owners and the priesthood. Nothing escapes their control.

The lands of Wallmapu are the object of desire for transnationals and landowners. They are driven by greed. Violence and repression are the language of the Chilean political caste used in the Wallmapu. Since the Araucanía war in the nineteenth century, their treaties are a dead letter.

Facing them are the Mapuche, a people with pride and dignity. Their struggle and resistance expose the political caste. During the post-dictatorship period, the presidencies of Patricio Aylwin, Eduardo Frei Ruiz Tagle, Ricardo Lagos, Sebastián Piñera, Michelle Bachelet, and now Gabriel Boric, have all ended up criminalizing the struggles that demand the restitution of the plundered lands.

Only during the government of Salvador Allende (1970–73) were agreements established that guaranteed Mapuche rights, penalized land grabbing, and limited the expansion of large estates. The coup d’état brought unparalleled repression. Mapuche land was handed over to the large landowners and they were subjected to an era of repression and death.

In 1964, Violeta Parra, the poet of the people, expressed the reality of the Mapuche people in a song: Levántate, Huenchullán. Here is an excerpt. Its verses bleed: “Arauco has a sorrow that cannot be silenced. They are centuries-old injustices, which everyone sees applied. No one remedies it though they could.… They are going to take away his land, he has to defend it. Arauco is desolate and the ajuerino de pie is on his feet. Get up, Manquilef…the elections are already roaring, they can be heard for not leaving. But the moaning of the Indian will never be heard. No matter how much the voice of Caupolicán thunders in the grave.… It is no longer the Spaniards who make them cry. Today it is the Chileans themselves who take away their bread.… The mañío no longer flowers, the pine nut no longer bears fruit. Araucania is going to dry up, the cedron no longer scents, because the Mapuche is being nailed in the center of his heart. Rise up, Curimón!” 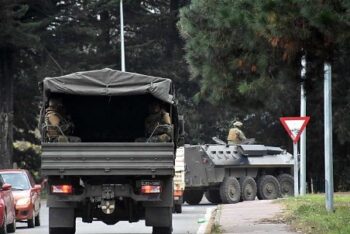 The Mapuche territories, Wallmapu, in the south of Chile have been heavily militarized. (Source: Werken Noticias, infowerken.com)

The Chilean governments have decided to militarize and criminalize the resistance of the Mapuche people. The state of emergency and the anti-terrorist law facilitate counter-insurgency policies. Less than a year into Gabriel Boric’s government, he already has to his credit the arrest of the leadership of the Arauco Malleco Coordinating Committee. Its spokesman, Héctor Llaitul, was arrested on August 24, accused of terrorism. Two of his sons, Pelentaro and Ernesto, are also being held on these charges. They have been transferred from Temuco prison to Valdivia and Concepción, violating all the rights of serving prison in the place of residence. This is how the progressives govern.

Today there are ten leaders of the CAM detained and affected by the arbitrary transfer of the government. To make their situation known, they started a hunger strike on November 27. On December 31, thirty-six days have passed. The news is worrying. For some, it is not their first time. The deterioration of organs such as the liver, kidneys, heart, and lungs is irreversible, to which torture is added.

Death enters the scene. The voice of the Wallmapu grows amidst the silence and complicity of the political caste. If the emblem of the popular rebellion of October 2019 was the Mapuche ensign, it was due to the condensation of rebellion that their resistance has accumulated over centuries. 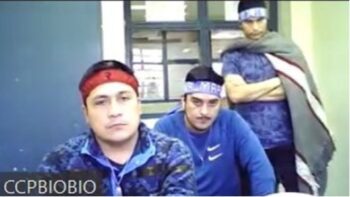 Three of the weicahafu prisoners in Concepción at the start of the hunger strike. (Source: Werken Noticias, infowerken.com)

In 2019, Ricardo Melgar Bao interviewed Héctor Llaitul for the magazine Pacarina del Sur. This is what he said: “For us, the main thing is to recover the territory and obtain freedom. The latter as a substantial element in the reconstruction of a people, and to achieve this, we fight for a type of autonomy, revolutionary autonomy.”

Breaking the siege, achieving the freedom of the CAM leaders, denouncing Gabriel Boric’s government in its policy of repression in Wallmapu, enhances the human condition, in the face of the extermination policy of a government that only aims to defend the interests of landowners and transnationals.

Andy Higginbottom is an Associate Professor at Kingston University, London where he teaches on slavery and emancipation, the crimes of the powerful, and international political economy. Andy takes a general interest in movements fighting extractivism, neocolonialism and oppression. He is active in support of social movements in Colombia, South Africa and Eelam Tamils. His current research projects are a dialogue with Marx's Capital concerning the theorisation of U.S. cotton slavery and British industrial capitalism; and an exploration of Marini's concept of labour super-exploitation with Marx's theory of surplus-value. He can be contacted at a.higginbottom [at] kingston.ac.uk.