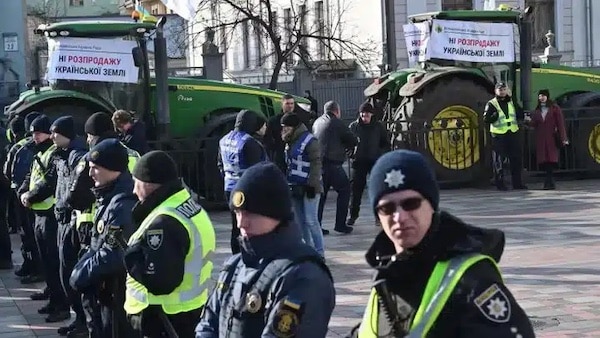 In 2020, farmers blocked the parliament building in Kiev to protest legislation allowing the sale of agricultural land.

“Your money is not charity, it’s an investment.” That’s what Ukrainian President Volodymyr Zelensky said in his address to the U.S. Congress while visiting Washington on Dec. 21.

He came asking for more billions to add to the more than $68 billion in war funding in 2022 alone. Two days later, Congress approved $45 billion in additional aid to Ukraine, bringing the total for 2022 to $113 billion.

Washington’s spigot has been pumping U.S. dollars into Ukraine since before 2004 to fund imperialist regime change. This plan accelerated, with increasing violence and tens of billions in U.S. dollars, culminating with the coup in 2014.

The coup was orchestrated by Washington and used to select the future leadership of Ukraine; from that moment on, destroying a once-sovereign country and replacing it with consecutive regimes of anti-Russian, pro-U.S. governments that were more than willing to honor the wishes of their U.S. masters: provoking war with Russia.

Zelensky’s statement about “an investment” must be seen in the context of the foreign investments that got a green light to sideline and impoverish the Ukrainian population after the coup in 2014. Some of those foreign investors were active shortly after the collapse of the Soviet Union as well.

BlackRock Financial Markets Advisory and the Ukrainian Ministry of Economy signed a memorandum of understanding in November. According to President Zelensky’s official website: “In accordance with the preliminary agreements struck earlier this year between the Head of State and Larry Fink, the BlackRock team has been working for several months on a project to advise the Ukrainian government on how to structure the country’s reconstruction funds.

Volodymyr Zelensky and Larry Fink agreed to focus in the near term on coordinating the efforts of all potential investors and participants in the reconstruction of our country, channeling investment into the most relevant and impactful sectors of the Ukrainian economy.

The stage was set for BlackRock by the IMF back in 2013 with a deal to “integrate” Ukraine into the European Union, to facilitate greater control and ownership over Ukraine’s resources. In fact, this desire led to the ousting of former President Viktor Yanukovych during the 2014 coup.

In December 2014, the Oakland Institute issued a report titled “The Corporate Takeover of Ukrainian Agriculture,” showing how Yanukovych’s rejection of this proposal led to the coup which ousted him:

“A major factor in the crisis,” the report states,

that led to deadly protests and eventually President Yanukovych’s removal from office, was his rejection of an EU Association agreement that would have further opened trade and integrated Ukraine with the EU. The agreement was tied to a $17 billion loan from the International Monetary Fund. Instead of the EU and IMF deal, Yanukovych chose a Russian aid package worth $15 billion plus a 33% discount on Russian natural gas …  This deal has since gone off the table with the pro-EU interim government accepting the new multimillion dollar IMF package in May 2014.

The report exposed the austerity clauses in the rejected EU trade deal, facilitating not only control over Ukraine’s resources, but also opening Ukraine up to the cultivation of genetically modified crops.

The report continues: “In ‘Walking on the West Side: The World Bank and the IMF in the Ukraine Conflict,’ a report released in July 2014, the Oakland Institute exposed how international financial institutions swooped in on the heels of the political upheaval in Ukraine to deregulate and throw open the nation’s vast agricultural sector to foreign corporations.

This fact sheet provides details on the transnational agribusinesses that are increasingly investing in Ukraine, including Monsanto, Cargill, and DuPont, and how corporations are taking over all aspects of Ukraine’s agricultural system. This includes circumventing land moratoriums, investing in seed and input production facilities, and acquiring commodity production, processing, and transportation facilities.

Selling off land to agribusiness

After the 2014 coup, cabinet positions were literally assigned by the U.S. State Department. Any legislation protecting the sovereignty of Ukraine economically from foreign takeover was set for destruction, replaced by proposed laws that would allow greater foreign ownership of land.

However, even before the moratorium on land sales could be changed, various loopholes were exploited by foreign agricultural entities. Since the sales prohibition only applied to the land, investors could build foreign-owned factories on leased land and hold it until the moratorium expired.

For example, in March 2014 – just weeks after President Yanukovych was deposed – agribusiness giant Monsanto invested $140 million in building a new seed plant. DuPont, in September 2014, completed the extension of its seed facility.

Ukraine is a big prize for the imperialists. It was once known as the “breadbasket of Europe,” with over 74 million acres of uncharacteristically fertile earth known as “black soil.”

So in March 2020, as a condition for a $5 billion IMF loan supported by Zelensky, Washington, the EU, and Western corporations, an economically desperate Ukraine enacted law 552-IX, which amended the country’s laws on conditions of turnover of agricultural land.

Now BlackRock is in a close partnership with Kiev, managing billions of dollars in investments to tear away any last shred of Ukraine’s economic sovereignty, while it pretends to be acting in defense of the Ukrainian people’s interests.