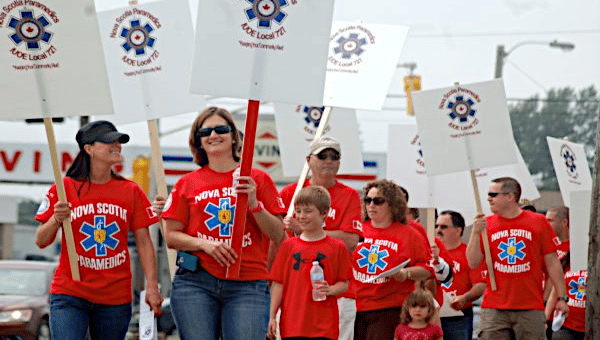 Ontario Premier Doug Ford recently found himself in hot water for removing the right to strike from educational workers, imposing terms and conditions of employment on them, and using the Notwithstanding Clause to bar them from asserting their constitutional rights.

New Democratic Party (NDP) leaders across the country have regularly condemned such anti-labour tactics–when they are out of power.

Ontario NDP leader-in-waiting Marit Stiles and other party stalwarts were expelled from the legislature last November for their strongly-worded attacks on the Ford government’s actions. And in March 2022, amid a strike by CP Rail workers, Federal NDP Leader Jagmeet Singh told reporters that his party deplores back-to-work legislation.

Ah, how conveniently they forget!

The New Democrats are also on the list of legislative strike-breakers. Almost every time they have been in government they have helped to hobble strikes, either by commission, banning them outright and impeding collective bargaining, or by omission, allowing employers to employ scabs. You would think the party had learned: especially since, in many cases, it suffered electorally as union members and party stalwarts abstained from voting or helping in the next campaign.

Yet collective amnesia prevails among NDP supporters. It’s as if the labour movement and the Party have undergone a memory-wipe right out of Eternal Sunshine of the Spotless Mind.

Let’s go back to 2014 and a newly-elected Nova Scotia Liberal government had just introduced legislation effectively eliminating the right to strike for 35,000 health and community workers across the province. At the legislature’s Law Amendments Committee, hundreds of affected workers, trade unionists and their supporters lined up to speak their five minutes against the bill until the wee hours of the morning. They excoriated the government for its punishing anti-labour agenda.

One union-side labour lawyer tore a strip off not only the provincial Liberals, but the Progressive Conservatives as well, for their penchant for shutting down collective bargaining. NDP opposition members of the legislature loudly condemned the bill and threatened a filibuster. Several people were heard to say “that’s what you get for voting out the NDP.”

And yet. The NDP government under Darrell Dexter that had ruled Nova Scotia ‘til six months earlier, had itself removed the right to strike from 800 unionized air and ground ambulance workers in the dying days of its mandate. A few months later, they went from government to third party.

Let’s look at some other examples.

The landslide victory of Dave Barrett’s NDP in 1972 ended the long rule of Social Credit in British Columbia. Barrett’s government brought in a torrent of progressive legislation, including labour and employment law reform unique in the country. But in1974 they passed the Essential Services Continuation Act forbidding Vancouver suburban firefighters from striking. A year later, they passed the most sweeping back-to-work legislation thereto in Canadian history, ordering more than fifty thousand private sector union members–in the forest, supermarket, gas and provincial railway sectors to refrain from striking. A short while later, they lost an election, dropping 20 of their 38 seats, including that of Premier Barrett.

In 1977, Griffin Steel Foundries in Winnipeg attempted to bust a strike by hiring scabs and herding them past the picket line while firing strikers. Over a six-week period 307 picketers were arrested for defying an injunction and eventually the strike was broken. The Manitoba NDP government under Premier Ed Schreyer refused to intervene through anti-scab legislation and reaped strong condemnation from the trade union movement. Most NDP governments have refused such legislation.

A later Manitoba NDP government under Premier Greg Selinger intervened in 2011 to order professors at Brandon University in the sixth week of a strike to vote on the employer’s last offer. The faculty union president denounced the action thus:

This intervention into the collective bargaining process at Brandon University is as dangerous as it is outrageous. It confirms for us the pro-employer bias shown by this allegedly ‘labour-friendly’ government throughout this round of negotiations.

The Bob Rae NDP government elected in Ontario in the teeth of a recession with a large majority in 1990 immediately set about cutting provincial expenditures through its so-called “social contract.” Failing to gain the support of key unions in talks, the Rae government opened the collective agreements of public sector unions, imposed a wage cut in that sector, and inflicted twelve mandatory unpaid “Rae-days” off, a further effective pay cut of about 5%. As in BC, the Rae N-Dippers became one-term wonders in 1995, dropping from 74 to 17 seats.

As its predecessor Allan Blakeney NDP government had done in 1975, the Roy Romanow government in Saskatchewan stepped in to prohibit a work stoppage at the publicly-owned Sask Power Corporation in 1998. The following year, with a provincial nurses’ strike looming, the Romanow government announced it would forbid the walkout and impose terms of settlement on the parties. Armed with this information, the health care employers did the logical thing: they stopped bargaining, making the situation worse. But the militant nurses refused to comply with the back-to-work order and maintained an illegal strike for ten days despite the threat of individual fines of $2,000, plus $400 per each day of defiance and $50,000 and $10,000 per day for their union.

The strike ended only after the government had climbed down in the face of public sympathy for the striking nurses.

In a provincial election a few months later, the Saskatchewan NDP lost the popular vote, dropped from 42 to 29 seats, almost going down to defeat after two terms in office. Only by allying with a small rump of Liberals was it able to stay in power.

This is not the first time health care workers have withdrawn their services, let’s not all panic here… The vast majority of our health care agreements have come to negotiated settlements, and as a result I believe we’ve had a better work place for our health care providers.

Wise words. Would that NDP governments took those to heart.

And yet governments of all stripes across Canada still rankle against these restrictions and try their best to defy them. Yes, even the NDP.

The underlying problem is this: governments don’t like strikes but they also don’t like arbitration with the chance that a third party might find the unions’ arguments more persuasive than the governments’.

So, many of these governments have taken to ignoring the Charter protections and have banned strikes, have refused to accept arbitration, and have imposed their own terms on the workers involved. Of course, the unions have challenged those restrictions in court. And, though it takes several years, nearly all of those challenges have been vindicated. When that happens, the governments can be tasked with onerous financial compensation for the affected employees and their unions. For example, the courts nailed the British Columbia Liberal government in 2016 for violating the rights of teachers’ unions. The consequent fallout of this decision forced the government to pay out an estimated $250-million annually more than if they hadn’t defied the law. And the government was forced to return to higher teacher-student ratios. Other governments too have been severely rebuked by the courts.

Of course, Doug Ford’s advisers were watching these Charter challenges with trepidation. So when Ford went after the education workers, he went one step further. Using the seldom-employed “Notwithstanding” loophole that allows Charter violators to don a cloak of invisibility, he forbade the unions from even challenging his law in the courts.

That turned out to be a step too far, as public opinion, and especially parents, turned against his government. The Charter has proven enormously popular in Canada, and not only among trade unionists.

Faced with the public backlash, Ford let discretion be the better part of valour and backed down on all parts of his draconian legislation.

But this will not likely be the end of governments defying the law. And, despite their apparent amnesia, NDP governments will likely get their memories back only when it suits them.