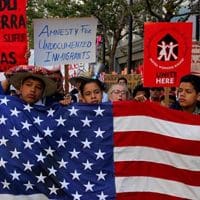 The March 9 debate in Miami between Hillary Clinton and Bernie Sanders was the first chance the two candidates for the Democratic presidential nomination had to discuss immigration and its connections to trade and U.S. policy in Latin America.  Unfortunately, neither candidate took advantage of the opportunity. The mainstream “immigration debate” generally avoids mentioning the […]

We’re now working on a new edition of our book, The Politics of Immigration: Questions and Answers, and you can help us. We won’t be making dramatic changes — unfortunately, not that much has changed in the immigration debate since the book came out back in 2007.  The media repeat the same myths about immigration, […]

On January 1, five South Florida residents stopped eating in a protest action.  They are demanding that the Obama administration take measures now to put an end to the deportations that are separating families — at least until Congress can provide more permanent relief by fixing our harsh immigration laws. The Fast for Our Families […]

In Colombia there is an expression: la paz del cementerio — the peace of the graveyard.  This is the kind of peace that powerful forces enjoy when everyone who resists them is dead and buried. Colombia’s government and its military and paramilitary forces have spent decades working diligently for this kind of peace.  They’re so […]

Most analysts agree that the chances of immigration reform in the first year or two of Obama’s administration are extremely slim.  We can’t expect politicians and policymakers to take action.  The change we want to see has to come from below. We can make it happen if we unite around a common goal: swift, practical, […]

On August 6, 34-year-old immigration detainee Hiu Lui Ng died in Rhode Island, in severe pain from a fractured spine and terminal cancer which went undiagnosed and untreated over the year he spent in federal lockups.  Valery Joseph, another immigration detainee, died of an apparent seizure at the Glades County Detention Center in Florida on […]

Nurses see everything in a day’s work.  But at the maternity ward of Nashville General Hospital, nurses caring for an immigrant woman in labor broke down and cried when the sheriff’s deputy guarding the woman refused to remove the shackles chaining her leg to the bed.  The undocumented woman was detained by local authorities because […]

According to an article in today’s Los Angeles Times, “L.A. Mayor Chides ICE for Workplace Immigration Raids,” Los Angeles mayor Antonio Villaraigosa “has asked the federal government to review its immigration enforcement priorities, warning that work-site raids on ‘non-exploitative’ businesses could have ‘severe and lasting effects’ on the local economy.” Villaraigosa “said ICE should spend […]

In November 2007, the Center for Immigration Studies, a think tank that favors reducing immigration, released a report entitled “Immigrants in the United States, 2007: A Profile of America’s Foreign-Born Population.”   The report was covered widely in the media, and the author, Center staff researcher Steven Camarota, was given many opportunities to repeat his […]

The co-authors of The Politics of Immigration: Questions and Answers have been facilitating dialogues on immigration at various places around the country since the book’s publication by Monthly Review Press in July 2007.  Below is a report on one of these dialogues, by co-author Jane Guskin.  Guskin will be on the panel “The Battle for […]