Recent experiences suggest that the generations-old practice of collective bargaining as the normal, if not dominant, method of negotiating the terms of unionized employment is losing its legitimacy.  Notoriously, upon taking office in January 2010, Wisconsin’s Governor Walker introduced a bill to strip public employees of their collective bargaining rights.  Despite a massive upheaval and […]

With the Koch Brothers footing his campaign, Scott Walker assumed the governorship of Wisconsin on January 7, 2011.  Walker’s first action as Governor was obeisance to the corporate class that put him in office: he gave $140 million in tax breaks to businesses, including WalMart, and then screamed “budget crisis!”  This move allowed him to […]

From the late summer of 1985 into the early spring of 1986, the small town of Austin, Minnesota, figured prominently in the national news.  The dramatic themes and issues, twists and turns, of a labor conflict there captured the national imagination.  This interest was not merely passive, as more than thirty support committees formed across […]

As the contract impasse between the Twin Cities Hospitals (TCH) and the Minnesota Nurses Association (MNA) has heated up, journalists, commentators, and interested bystanders have looked increasingly to history for insights and lessons.  The participation of more than 12,000 nurses in the one-day strike of June 10 was widely described as the “largest” nurses’ strike […]

The last thirty-five years have been disastrous for American unions.  The percentage of the workforce represented by unions has declined from about 30% to barely 10%.  As the unionized island in the center of the workforce has shrunk, every element of labor relations affected by unions — job security, promotions and lay-off, job descriptions, wages […]

This year’s Postal Press Association Editors Conference was abuzz with discussion of the Postal Service’s threats to close hundreds of’ stations.  Virtually every editor present knew of one or more stations at risk in her or his own jurisdiction.  The wolf which has loomed at the APWU‘s door for years — plant closings, job losses, […]

Today’s critical labor struggles revolve around immigrants’ rights, while today’s struggles over immigrants’ rights are grounded in workplace and labor organizing.  Global, national, and local histories have woven these issues tightly together.  In the U.S. we are seeing the beginnings of a multifaceted movement which engages these dynamically linked histories. Twenty-five years ago, U.S. labor […]

In April 2006, hundreds of thousands of immigrant rights protestors marched in cities across the United States.  They countered prolonged debates about the pros and cons of comprehensive immigration reform with a short but sweet affirmation, scrawled on placards: “No Human Being Is Illegal.”  Their direct assertion challenged the deeply entrenched practices of our government […]

In early August I had the good fortune to attend the 2007 Postal Press Association National Editors’ Conference in Reno, Nevada.  I presented a workshop on “Linking the Past to the Present,” a way to think about what we can learn from the labor movement of the past and how editors can incorporate such insight […]

“We are moving into a service economy.”  How often have we heard this in the past twenty-plus years?  Most of us here in the Twin Cities have thought little about it until we received the jolt this year that, after eighty years in operation, the Highland Park Ford plant is going to be closed.  We […]

What follows is Peter Rachleff’s letter to José Arturo Ibarra, a San Francisco-based Northwest flight attendant who successfully led the fight to reject the contract that demanded “a 30 and 40 percent cut in pay and benefits” and givebacks on everything from health insurance to work rules. — Ed. Dear José: I have been meaning […]

It’s impossible to celebrate Labor Day 2005 without asking some hard questions: How organized is “organized” labor? How much of a movement is the labor “movement”? The last six weeks have torn away whatever shreds of clothing the emperor might have been wearing.  We can deny the crisis no longer. In late July at the […]

Sisters and Brothers: As I am sure you know, 4,400 mechanics, cleaners, and custodians represented by the Aircraft Mechanics Fraternal Association have been on strike for 5 days at Northwest Airlines. The issues they are facing will soon face all of us. They have dug in for a substantial fight and they intend to win, […] 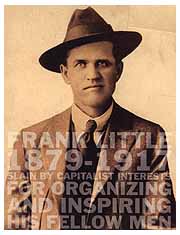 At noon on a beautiful June day in suburban Minneapolis, eighty-five women and men streamed out of the U.S. West corporate “campus” building, each one carrying a pink, lime green, or lemon yellow square. Each square bore a single letter in black paint. Laughing, they lined up in a particular order, spelling out “D-O-W-N-S-I-Z-I-N-G A-T  […]