Richard "Dick" Levins was an ex-tropical farmer turned ecologist, a population geneticist, biomathematician, mathematical ecologist, and philosopher of science, who had researched diversity in human populations. Until his death, Levins was a university professor at the Harvard T.H. Chan School of Public Health and a long-time political activist. He was best known for his work on evolution and complexity in changing environments and on metapopulations. 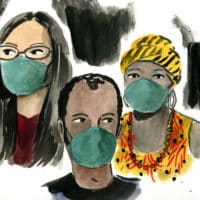 When health policy is looked at from the point of view of which issues involve a direct confrontation with ruling-class interest, which involve simply relative benefits to a class, and which are neutral, we can predict which kinds of measures are possible—highlighting the lie in the notion society is trying to improve health for all.