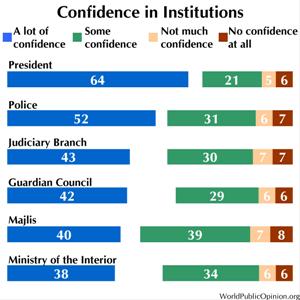 Indications of fraud in the June 12 Iranian presidential election, together with large-scale street demonstrations, have led to claims that Mahmoud Ahmadinejad did not actually win the election, and that the majority of Iranians perceive their government as illegitimate and favor regime change. An analysis of multiple polls of the Iranian public from three different […]

RELATIONS WITH THE US 1. Diplomatic Ties Six in ten Iranians favor restoring diplomatic relations with the US.  An equal number favor unconditional negotiations between the countries.  Many favor cooperation on dealing with the Taliban. Thirty years after the United States and Iran broke diplomatic relations, Iranians overwhelmingly support repairing that longstanding breach.  Both governments […]

Questionnaire/Methodology (PDF) When President Obama arrives in Russia for the Moscow summit he may face a cool reception.  A new poll of Russians, conducted by the Levada Center as part of a larger WorldPublicOpinion.org poll, finds that just 23 percent of Russians have confidence in Obama to do the right thing in international affairs, while […]

June 3, 2009 Questionnaire/methodology (PDF) A new WorldPublicOpinion.org poll finds Egyptians continue to view US foreign policy quite negatively and see President Obama as closely aligned with it.  At the same time, Obama has much better ratings than Bush had, and there are signs of thawing feelings toward the US. Asked how much confidence they […]

Questionnaire/Methodology (PDF) Full PDF Version A majority of Americans feel that it is time to try a new approach to Cuba, according to a national poll by WorldPublicOpinion.org.  More specifically, the public favors lifting the ban on travel to Cuba for Americans and re-establishing diplomatic relations as well as other changes. By a wide margin […] 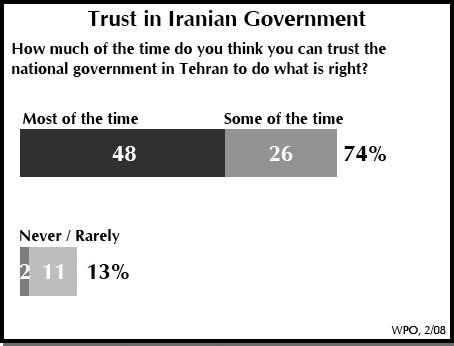 Iranians largely express satisfaction with their government.  Two out of three say that Iran is generally going in the right direction, though a plurality is dissatisfied with the Iranian economy.  Half say they trust the government to do what is right most of the time, while another quarter say they trust it at least some […]